Meet Yvette: The Chimp Who Survived 30 Years in Medical Research 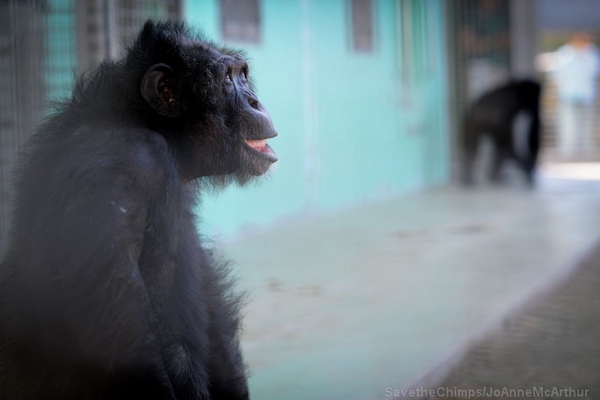 Meet Yvette. She was born in the wild and captured when she was less than two years of age. Her mother and other members of their community were probably killed in the process. Imagine trying to take a human baby away from her mother; you would get the same response from chimpanzee mothers, who are as deeply connected to their young as we are. She was transported from Africa to a medical research laboratory where she spent 30 years as a test subject and as a breeder. Thirty years. Her four children were taken away from her, also to be used in research.

In 2002 she was rescued by Dr. Carole Noon, Founder of Save the Chimps. She now lives with a family of other chimpanzees on one of twelve islands that were built as retirement homes for chimps rescued from biomedical research and the entertainment industry. Far from her life in a solitary cage, she now enjoys relaxing and curling up in a nest of blankets.

Dr. Carole Noon passed away a few years years ago. She is hero to hundreds of chimpanzees and to thousands of humans who are following her lead in the animal rights movement and who continue to work and volunteer at Save the Chimps, her legacy.

It’s sad to say, but Yvette is considered one of the lucky few. At this moment, thousands of primates live in cages at universities and research labs across North America. They are kept in confinement and deprived of the basic rights that all reasoning, sentient beings should be accorded: to live with dignity and free from suffering, to be free of degrading treatment and slavery. Beyond primates, millions of animals such as dogs, cats, horses, rabbits and rats are also used in unnecessary medical and “product” research each year. Research facilities often cite the Animal Welfare Acts in defense of their “humane” treatment of animals, but these acts only advise bare minimum (and often unsupervised) guidelines about food and housing without taking into question the experimentation itself. Apparently, cruelty to one animal can be a criminal offense but cruelty to millions is simply science.

We can all help put an end to the use of animals in laboratories. Here’s how:

Every time you spend money on a product, you are supporting the person or corporation who made it. Be it toothpaste, cleaning products or vitamins, take the time to look for brands that have not used animals in testing. You can do extensive research on line, or simply look for the cruelty free logo on the back of the product (which is the likeness of a rabbit. The product may also simply advertise that no harm was caused to animals in the creating of their product).

Write to your city counselors and let them know that you’d like the abolition of animal exploitation to become part of their discussion and mandate. Until animal experimentation ends, your tax dollars are supporting it.

Speak up for animals in laboratories. Often. Let your friends, family and community know that the problem exists, letting them also know that there are solutions that they can take part in.

Help primates such as Yvette, and organizations such as Save the Chimps continue their invaluable and necessary work. The primates who live in labs right now depend on it.