By Matthew Prescott, Humane Society of the United States

Over the last year, my colleagues and I have spent thousands of hours surveying America’s largest food companies – determining what promises they’ve made around the treatment of animals in their supply chains and where they are in terms of keeping those promises. The results paint a picture of the food industry that is at both hopeful and horrifying.

The bleak state of animal welfare on factory farms

For context, it’s important to note that billions of animals live in dire conditions on factory farms. Mother pigs are locked in cages so small they can’t even turn around for years on end. Egg-laying hens are locked in cages so cramped they can’t spread their wings, sometimes even forced to live with the carcasses of their dead cage-mates. Chickens in the meat industry are bred to grow so large so fast they suffer crippling, painful leg disorders. The list goes on.

The future looks a little better for farm animals

The good news is that over the last five-to-ten years, most major food companies have promised to eliminate, over time, some or all of these practices from their supply chains. They’ve established timelines for switching to 100% cage-free eggs. They’ve pledged to eliminate the confinement of mother pigs inside gestation crates from their pork supply chains. And they’ve demanded reforms in how chickens are raised and slaughtered. But consumers want to know: are companies keeping their promises?

Through surveying nearly 100 companies and auditing their public statements about animal welfare, we found that many companies are indeed keeping their promises. Companies like Costco and Unilever have moved nearly their entire egg supplies to cage-free. Panera Bread and others have made important strides in reducing gestation crate confinement in their pork supply chains. And Whole Foods and Chipotle have outright banned these practices for over a decade, while in the foodservice industry, Bon Appetit Management Company has led the way for many years.

At the same time, we found many companies that seem to have taken no meaningful steps toward keeping their promises, have dramatically weakened their pledges, or have done away with animal welfare commitments all together. Subway, for example, pledged to “rapidly eliminate” gestation crates from its pork supply chain in 2012, yet today, reports no progress whatsoever toward that goal. And policies to eliminate gestation crates that Cracker Barrel, TGI Fridays and other companies issued years ago no longer even appear on their websites. 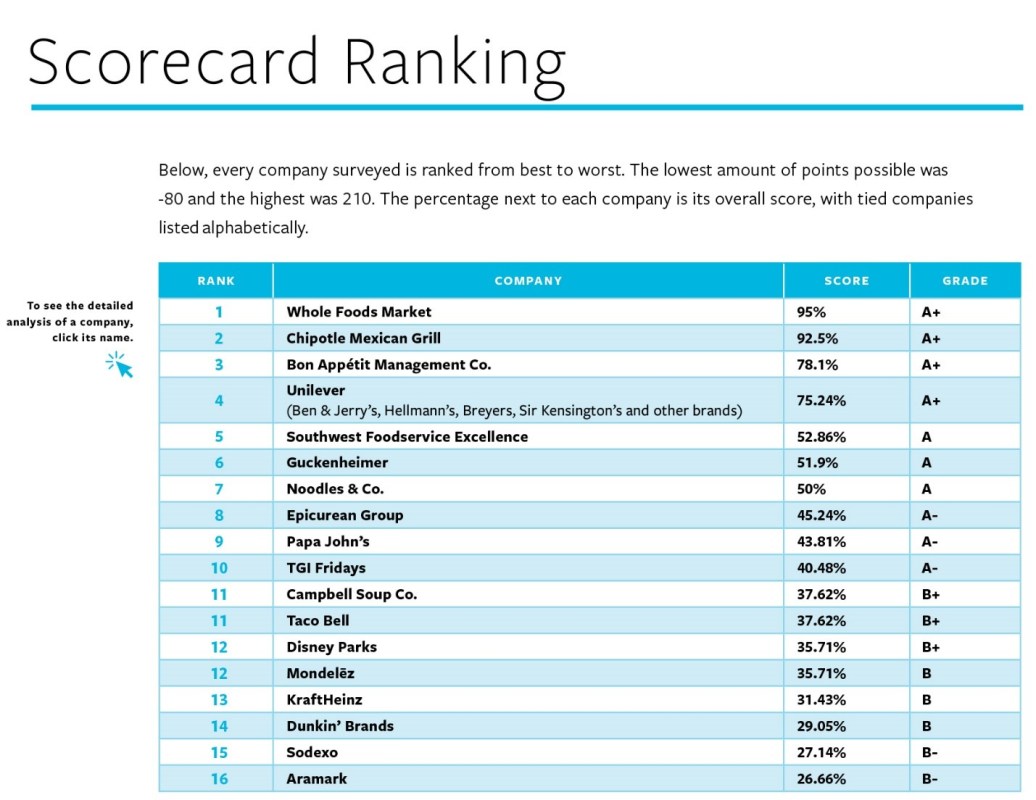 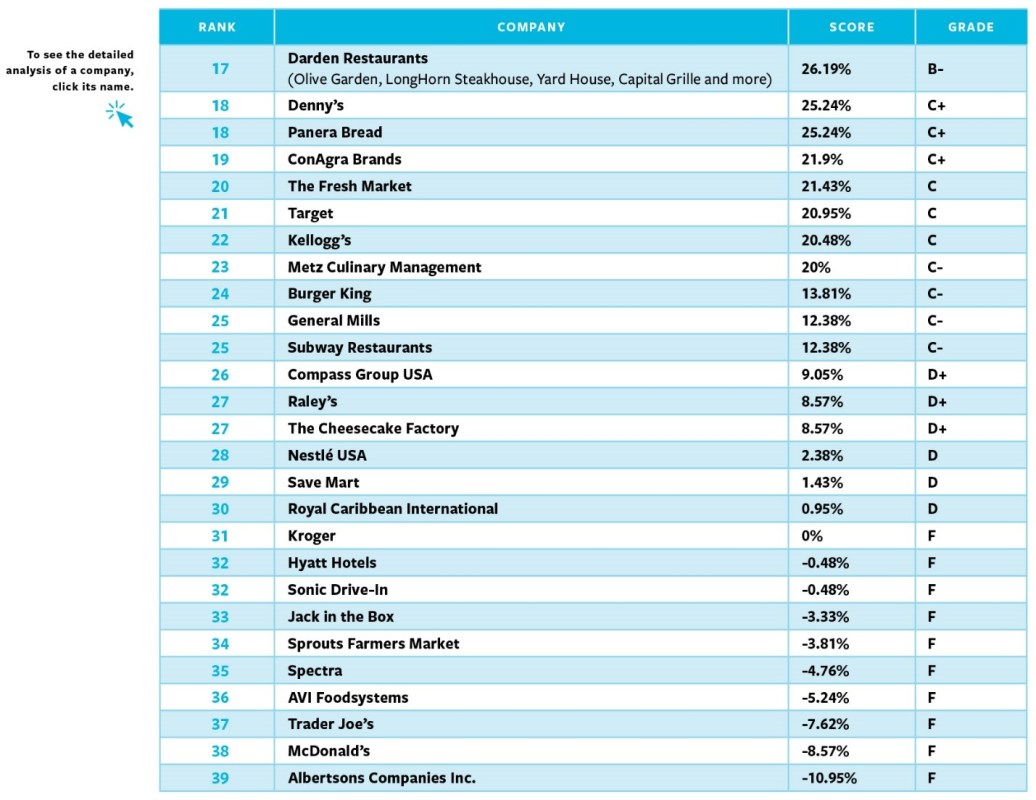 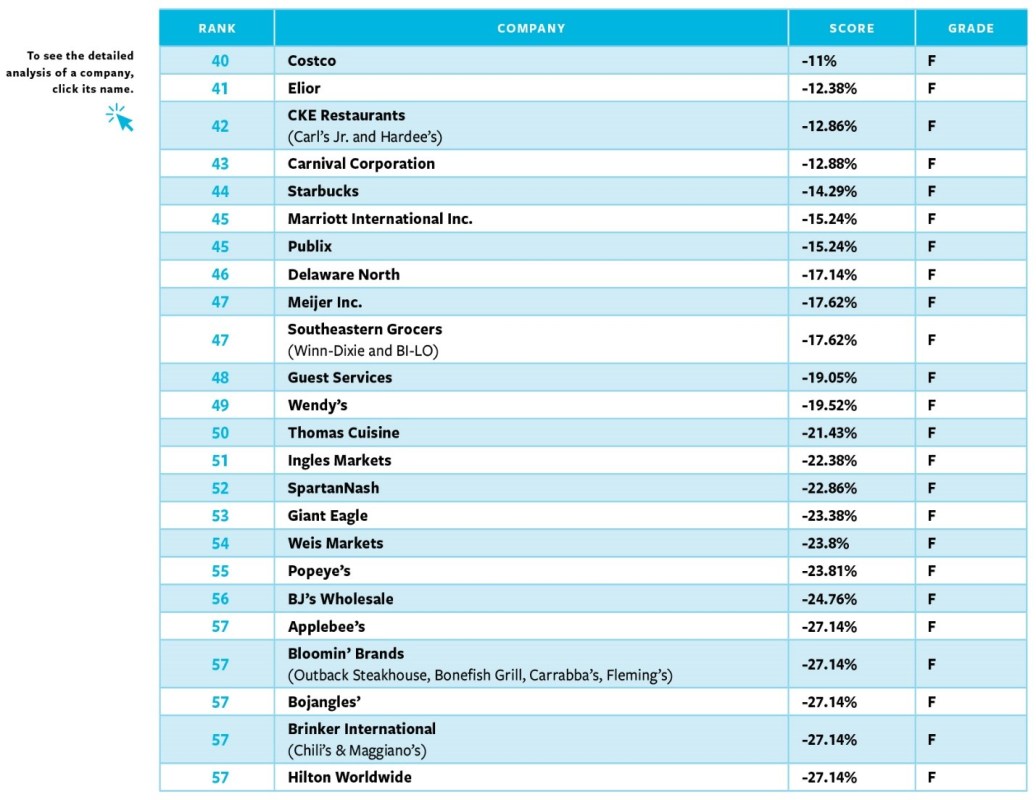 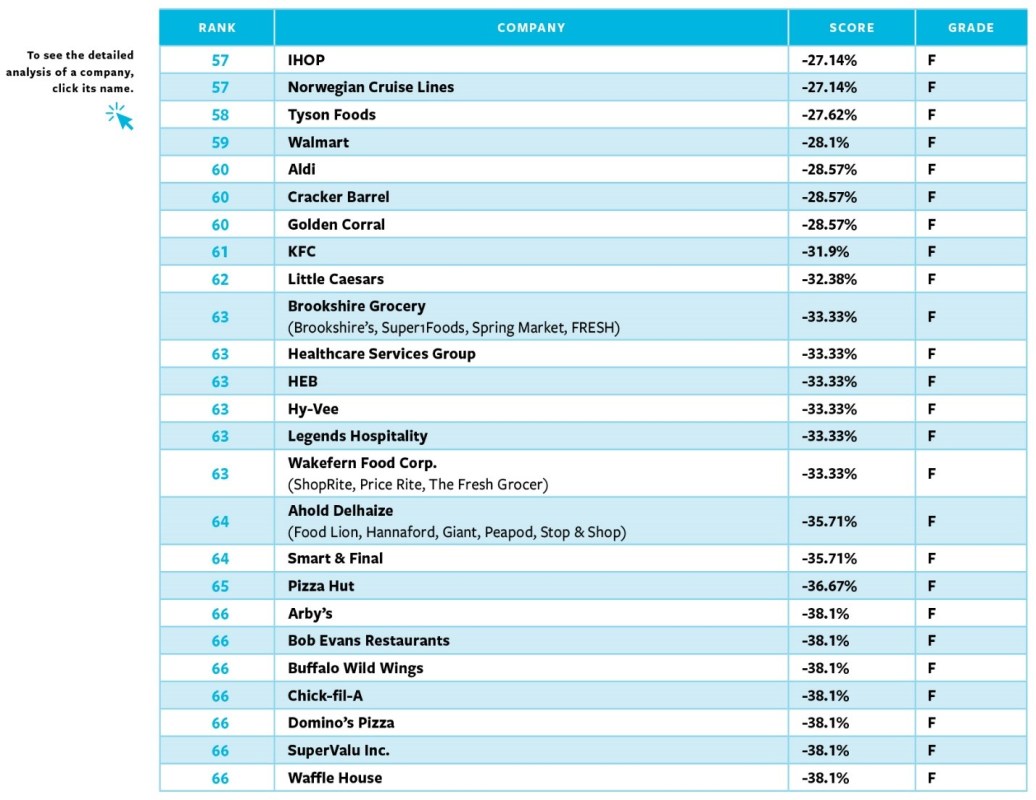 More plant-based foods on the horizon

One area where we found substantial progress is around efforts to serve more plant-based foods. As concerns about climate change (and the meat industry’s mega-emissions) grow, so too has the proliferation of products that look and taste like meat but are made from plants – since plant-based foods are, on the whole, more eco-friendly. (And they of course don’t carry the animal abuse concerns attached to industrial meat and eggs.) For example, Burger King, Carl’s Jr., Dunkin’ Donuts and other companies earned high marks for adding and nationally promoting meaty plant-based options.

In my twenty-year career working to help animals, I’ve never seen a time when consumers were more concerned about these issues than today. People want to know how the food we’re eating was produced, including when it comes to issues like the treatment of animals and impact on the environment. It seems like every day another major food company is responding to those concerns with some kind of better-for-the-world promise.

But making a promise and keeping a promise are two very different things. Through our Food Industry Scorecard, we are proud to shed some light onto which companies are leading and which are lagging.

Have you thought about joining the millions of people who have started to eat more plant-based meals in their diet? Sign the Humane Society of the United States pledge to do Meatless Monday!

Matthew Prescott is senior director of food and agriculture for The Humane Society of the United States.