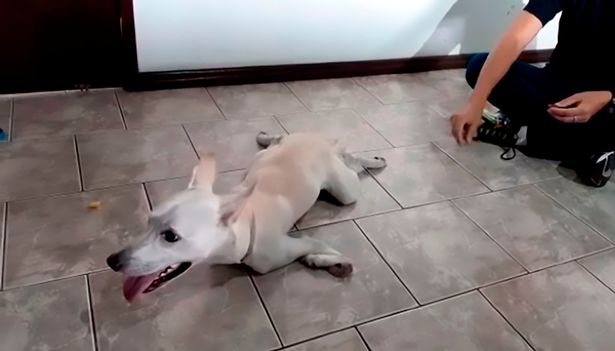 When someone can no longer care for a dog, the right thing to do is drop them off at a no-kill shelter and make sure they have the chance to find the perfect family. The shelter workers might be sad that a dog would be losing their family but they will do their job of finding the dog a home. The dog wouldn’t be left to fend for themself. Yet some people still think it’s a better idea to just abandon a dog and leave them to suffer, searching for scraps at risk of being hurt by people, other animals, accidents, and more. When people abandon animals this way it’s not just contributing to pet homelessness, but it’s absolutely cruel. One family recently did this, but what makes the entire situation worse is that they did it twice in one day and the dog was disabled.

Tintin is a sweet, lovable dog who only has three legs and a disability in his remaining front leg. He walks with a limp and because of his special needs, he requires extra love and care. When his family decided they couldn’t give him this, they were extremely cruel to him. Footage was released that shows a woman driving somewhere before stopping and letting her dogs out the car. She guides one of the dogs back in before closing the door and aggressively shoving Tintin away. He falls on his face and limps behind the car as it drives away, leaving him there all alone.

The footage is difficult to watch. Any person with an ounce of sympathy would feel heartbroken for the dog, but not this woman. And her husband is apparently the same. The dog was returned to their by someone and later that same day, the woman’s husband did the same to him at another location — dropping him off and leaving him all alone.

Fortunately, Tintin has since been rescued and Euro Weekly News reports that he has already been adopted by a family!

What happened to Tintin is not acceptable and people should not be able to get away with such cruelty to animals. Sign this petition urging the authorities in the Brazilian city of Sao Leopoldo to find the people responsible and charge them with animal cruelty!