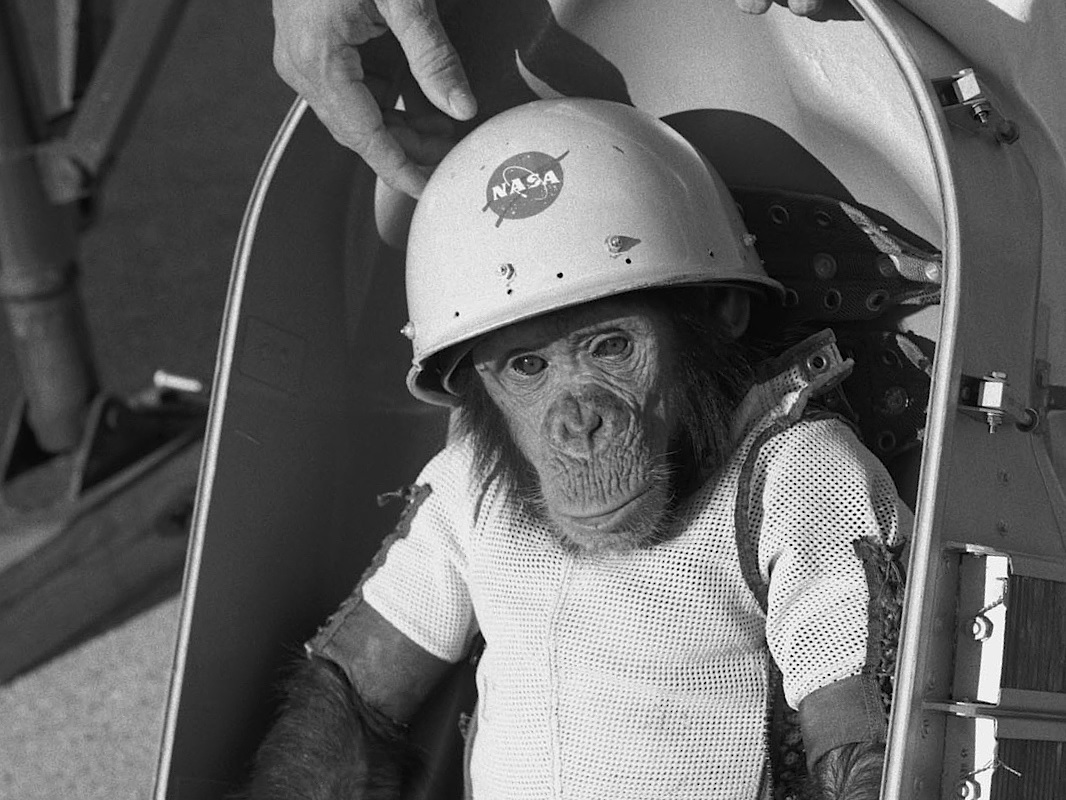 At the end of 2020, a controversial fact emerged about the National Aeronautics and Space Administration (NASA). A Freedom of Information (FoI) request revealed that all the captive monkeys in one of its research centers had been put to death on a single day in 2019. Drug research company LifeSource Biomedical, which leases space at the NASA center, said it received the 27 monkeys “years ago” as an effective donation. The Guardian described the monkey’s living situation, prior to their deaths, as a “joint care arrangement” between NASA and the company.

After the mass euthanization of the monkeys came to light, animal ethics expert at the University of New Mexico, John Gluck, commented that the monkeys were “apparently not considered worthy of a chance at a sanctuary life”. He added, “Disposal instead of the expression of simple decency. Shame on those responsible”.

NASA is, however, no stranger to shame when it comes to the institution’s treatment of non-human animals. It has a long history of using them for experimentation.

No choice for chimps

The purpose of many space-related experiments using non-human animals has been to gauge how living beings react to and cope with the conditions in space, to ease the way for space exploration by humans. Since the early days, primates have been a go-to species for these space rehearsals.

The US Air Force famously sent two chimpanzees on space flights in the 1960s. The first was a chimp called Ham. He was only three-years-old at the time, meaning he was still a baby. A chimp called Enos followed. As the Atlantic explained, as a result of a malfunction, Enos was subjected to 76 electric shocks in orbit. Electric shocks were par for the course for these chimps, both in training and in orbit. They had to perform tasks and electric shocks were the punishment for getting them wrong. But a technical malfunction during Enos’ flight meant that, despite getting his tasks right, the shocks keep coming.

The two chimpanzees were among a group of 65 that people snatched from the wild for the US to use in the space program, according to the Los Angeles Times. As the media outlet stated, the Air Force subjected them to sleep deprivation and centrifugal spinning. Some also endured “decompression sled tests”, which damaged their brains. Once NASA had no more space use for them, they became “research subjects for medical and cosmetic testing” the Los Angeles Times reported.

NASA hasn’t only used chimps in space research though. It had sent six rhesus monkeys into orbit in the late 1940s and early 1950s. None of the monkeys survived the ordeal for more than a few hours after landing. NASA has also used fruit flies, mice, bullfrogs, spiders, and fish in such space-bound experiments.

The US isn’t alone either. Russia has also sent many non-human animals to space over the years, most famously a dog named Laika. France, China, and Iran are among the other countries to have engaged in the practice.

In 2010, one of NASA’s planned experiments with squirrel monkeys caused a public outcry. The agency wanted to subject 27 of the primates to doses of radiation, to help it “predict neurobehavioral effects of space radiation” on astronauts. People for the Ethical Treatment of Animals (PETA), high profile figures, and numerous members of the public condemned the plan. After the outcry, NASA shelved the planned experiments.

Meanwhile, Cruelty Free International criticized another NASA experiment in 2016. The agency had sent a group of mice to space to experiment on them while they were in orbit. As Cruelty Free International explained at the time, researchers claimed that the experiments would “benefit future astronauts and patients on Earth who suffer from muscle-wasting conditions such as motor neuron disease (known as ALS in the US)”.

However, the group argued that the “likelihood of this research translating into any meaningful treatment for humans is extremely low”. It said that researchers had tested around a dozen ALS-related drugs on non-human animals in the past decade. But it claimed that all of these drugs “failed in humans” during clinical trials, apart from one that had “minimal benefit”. As such, Cruelty Free International said the experiment was “cruel and pointless”.

In a 2014 article, the president of the New England Anti-Vivisection Society, Theodora Capaldo, also questioned the efficiency of experimentation on non-human animals. She wrote that many “drugs that appear safe and effective in animals fail in humans, or cause significant harm, and even death”. Capaldo cited a 2004 U.S. Food and Drug Administration study that found 92% of drugs that entered clinical trials after research involving non-human animals didn’t receive approval. She questioned why researchers don’t “shift funding to promising animal-free technologies” rather than remaining “stuck in a model developed more than 100 years ago”.

Thankfully, some researchers are developing alternatives to non-human animal testing. Cell cultures, meaning growing human cells in laboratories, is one area of exploration. Scientists are now even growing human cells on tiny scaffolds in a way that mimics the functioning of organs, known as “organs-on-a-chip.” Studies on humans and on human tissue donated by volunteers are additional options. Of course, in our technological age, researchers are also exploring how computer models and algorithms can provide alternatives to non-human animal testing. As Warren Casey, the director of the U.S. National Toxicology Program’s Interagency Center for the Evaluation of Alternative Toxicological Methods, pointed out in 2019, alternatives could be “much cheaper and much faster” than non-human animal testing.

Casey said, “ethics, efficiency and human relevance” are driving the search for alternatives. However, arguably “sustainability” should also be on that list.

Experimentation on non-human animals is grounded in anthropocentrism. That’s essentially the idea that humans are the center of the universe and uniquely possess an intrinsic value. As such, anthropocentrism would have it that all other lives are “lesser” and can be sacrificed for the “greater” human good.

It is this mindset that has guided the actions of many humans towards other animals, in a multitude of ways, through the centuries. As the current biodiversity crisis shows, however, anthropocentrism is unsustainable. It’s resulted in a rapid depletion of the world’s species. To turn this travesty around, the UN has urged people to “make peace with nature.” For anyone wedded to anthropocentrism, one way of doing so would be to seriously dial their human-centric mindset down.

It’s hard to think of a better illustration of the belief in human supremacy than experimentation on earthly non-human living beings just to make it easier for people to blast off into space. So people at NASA could tackle that institution’s anthropocentric issues, and start to make peace with nature, by not forcing other animals to orbit the Earth and stop testing on them in the name of space exploration.