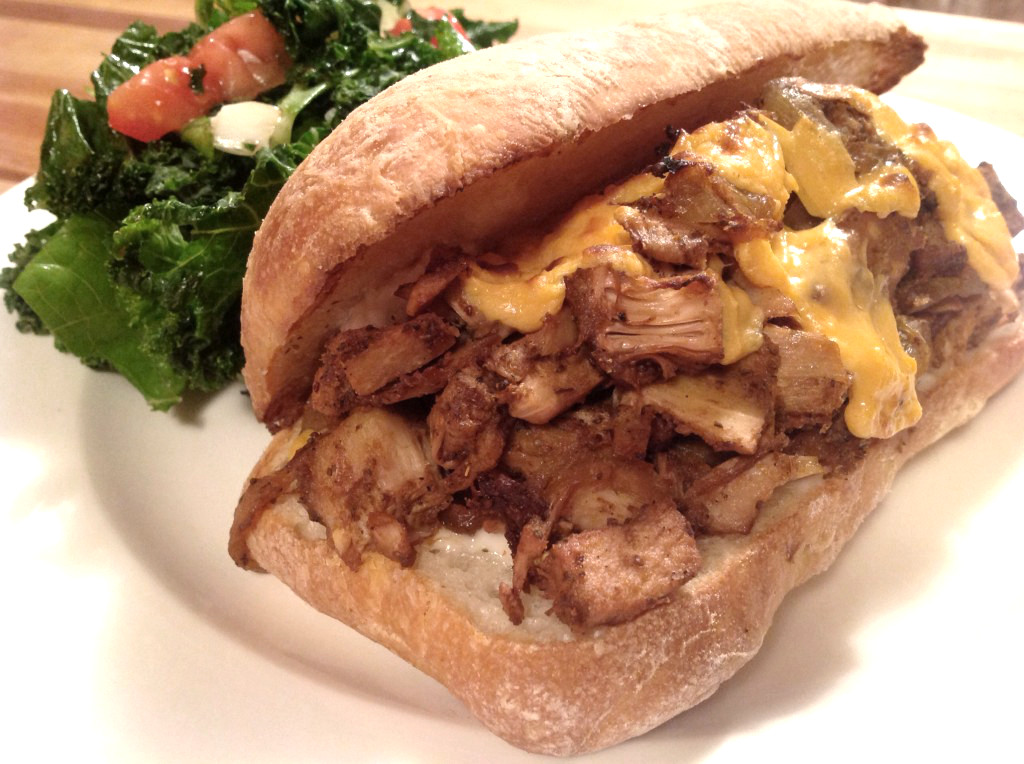 Since I was making 4 big sandwiches, I used 2 cans of jackfruit. If you are making smaller sandwiches, one can would be enough. Rinse the jackfruit well because it’s been sitting in brine and it will be too salty otherwise. Some people throw away the cores when they prepare the jackfruit but that’s throwing away more than half the contents of the can. I sliced them up finely and they are perfectly edible. I read a lot of recipes for tips on how to prepare and cook jackfruit. I covered the jackfruit with a spice rub and toasted it in a pan for a few minutes before adding some oil to cook them in. Then I added in some caramelized onions and made a gravy for the jackfruit to simmer in. That made it soft and tender and easily pulled apart. I wanted my jackfruit to be chewy and meaty though so I put it on a baking sheet and roasted it for 15 minutes. Then I piled it high on heroes, topped it with vegan cheddar and broiled the heroes just long enough to melt the cheese. It’s amazing how meaty this tropical fruit is. Other than a slight sweet taste, almost like pineapple, the jackfruit is pretty much a blank canvas so you can use whatever spice and flavor panels you like best – Indian, Mexican, Chinese, whatever.

Per Sandwich: Calories: 448 | Carbs: 62 g | Fat: 21 g | Protein: 8 g | Sodium: 589 mg | Sugar: 31 g Note: The information shown is based on available ingredients and preparation. It should not be considered a substitute for a professional nutritionist’s advice.

When Rhea became vegan, there were no places in her Bronx neighborhood to eat so she had to learn to cook, mostly by watching TV cooking shows, especially Christina Pirello and Rachael Ray.  That led to the creation of The "V" Word website which focuses on vegan versions of favorite, familiar foods. Rhea has written several e-cookbooks which are available on her web site. It is Rhea's hope that she can spread the "V" Word to bring more compassion into the world and it is her dream to become the vegan Rachael Ray.