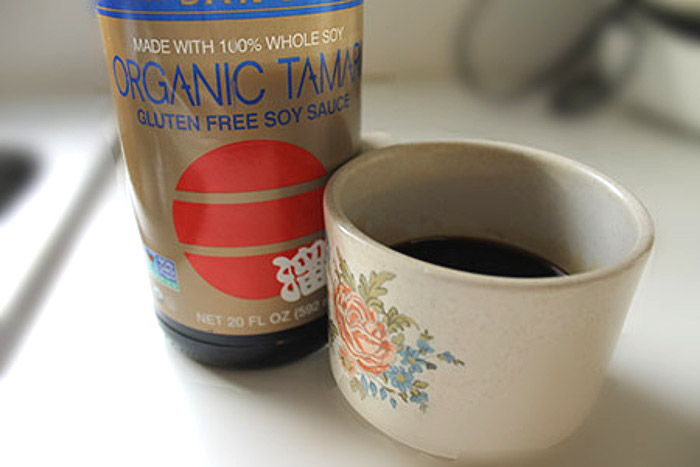 Tamari is a uniquely delicious and versatile seasoning that adds immeasurably to the flavor of soups, sauces, and entrees.  It is a variation of soy sauce that is thicker, darker in appearance, and is richer in flavor than traditional soy sauce.  Tamari is considered the “original” Japanese soy sauce, as its recipe is closest to the soy sauce originally introduced to Japan from China.

Technically, this variety of soy sauce is known as miso-damari, as it is the liquid which runs off of miso as it matures.  The Japanese word tamari is derived from tamaru meaning “to accumulate”, referring to the fact that tamari was traditionally a liquid byproduct made during the fermentation of miso.  While both soy sauce and tamari are made from fermented soy beans, the ratio of wheat to soy in tamari is generally 1:1.  Because of the difference in flavor, it may be a good idea to keep both tamari and soy sauce on hand if you like keeping a variety in your pantry.

Unlike shoyu, which dervies most of its flavor from natural alcohol produced from wheat fermentation, tamari’s rich flavor comes from an abundance of amino acids derived from soy protein.  Tamari also contains much less salt than traditional soy sauce.  It also aids in the digestion of fruits and vegetables, while being rich in several minerals, and is a good source of vitamin B3, protein, manganese, and tryptophan.

Tamari contains little to no wheat, and can be found wheat-free for people with a gluten intolerance.  But, as always, if you have an intolerance or an allergy, or any sort of condition that involves food, be sure to do some research about different food sources and brands.  The most common brand of tamari found in health stores is San-J; their tamari comes in organic wheat-free tamari as well as a wheat-free reduced sodium variety.

Using Tamari in your favored recipes:

Tamari’s excellent cooking qualities make it a seasoning appreciated by both ethnic and natural foods cooks around the world.  Here are a few tips you can take with you and bring a little bit of flavor to your entrees:

Here are a few of our favorite recipes that use Tamari: