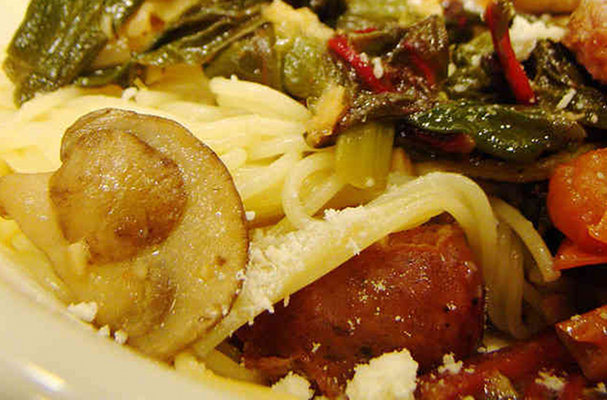 Sure, I love sipping wine with a wonderful meal, but cooking with wine can turn a good dish into a great one. Before we look at the best ways to incorporate wine in cooking, and which wines to use, it’s important to know a few basics.

The old adage holds true. Don’t cook with a wine that you don’t like drinking. No exceptions.

Wine tends to intensify in cooking, so you can see just how important it is to like what you are using.

That said, you don’t need to use expensive wines in cooking, but don’t use wines labeled as cooking wines. These are typically found in the grocery store and are made of inferior wine that has coloring and additives. It’s often salty, which is not a flavor found in wine.

A long standing rule of both cooking with wine and pairing wine with dishes is that red meats require red wines and vegetable dishes (along with fish and chicken) call for white wines. Does that mean red wines are never a good choice for vegans? Absolutely not. It means we’ve got even more fun ahead of us as we explore the best combinations, unhindered by such a limiting thought.

Which leads me to the most important rule of drinking or cooking with wine: Have fun with it!

What Happens to the Wine When Cooking?

It’s commonly believed that the alcohol evaporates in cooking, but leaves its flavor impact. Alcohol evaporation begins at 172 degrees F. Recent studies state that the some alcohol stays in the dish, but the amount varies. The most important indicator is how long the dish cooks after the wine has been added. The longer the dish cooks, the more alcohol cooks off. One thing to keep in mind is that while the flavor of wine intensifies, the alcohol level doesn’t.

With the exception of fortified wines, which will be discussed later, it’s best to add wine during the cooking process rather than in the last few minutes of cooking time. This allows the flavors of the wine to integrate with the dish. As always, cook to taste. The goal is to find the right balance of wine to enhance the dish, but not overwhelm your palate. Just as too much vinegar is just that—too much—the same can be true with wine.

Choosing a Wine for Cooking

Sometimes when matching wine to a meal, the best wine choice is a big contrast to the food. A good example of this is serving a bright, fruity, not quite sweet Riesling with a hot and spicy Asian dish. But when cooking with wine, the approach is usually to enhance the flavors of the dish, creating a compliment.

To start, think about the flavors and body of the recipe you are preparing. If it’s a hearty, bold dish, such as chili, you want a bigger red wine. Any subtle nuances in the wine would be wasted in this dish because the dish itself is rarely subtle. A good choice for a complex dish, such as piccata with its lemony zing, would be a fresh tasting, citrusy white wine.

Wine can be incorporated into cooking in several ways. One of the easiest ways is in marinades. This is one of the best places to get started because you can taste the marinade as you go to be sure you are getting the flavor profile you want. As a bonus, a wine can also take the place of some of oil in a marinade.

A quick way to get an infusion of flavor is to use wine to deglaze a pan. In our previous example of chili, once the vegetables and proteins have been cooked there may be some bits (called “fond”) stuck to the bottom of the pot. Add a splash of wine and scrape the bits from the bottom to spread the flavor throughout the chili.

Whenever I make seitan in a slow cooker, I add some red wine to the simmering broth. Try this when making soups, too.

Fortified wines, such as sherry and Marsala, are usually the only wines added very near the end of cooking. In this case, the acidic wine brightens the dish. Think of sautéed mushrooms with a little sherry stirred in right before serving. This is the same way Marsala is used in Marsala sauces. When added at the end of the dish, the flavor generally comes through in the finished dish much the way it tastes right out of the bottle. One final note on fortified wines: Personally, I have yet to run across a vegan port. I’d love for that to change, so if you know about one, please let me know.

This overview scratches the surface of how wine can enhance cooking. In upcoming articles we’ll discuss some of the very best wines for cooking. In the meantime, remember the most important ideas about wine: Experiment and have fun!