Yvonne, the Runaway Cow to Become a Hollywood Star 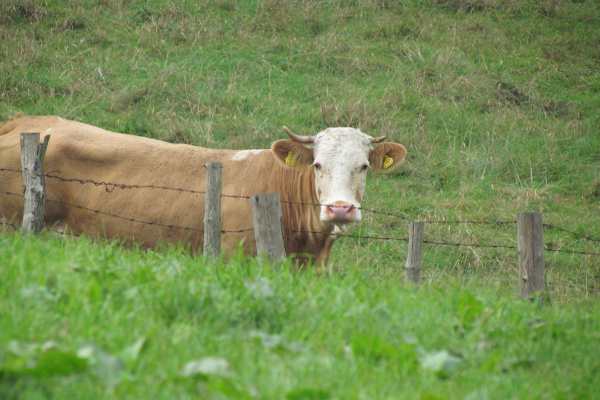 The story of Yvonne, the cow who became famous last year when she escaped a slaughterhouse and eluded her pursuers for three months is going to be turned into an Hollywood movie.

Gut Aiderbichl, the animal sanctuary that Yvonne now calls home told SPIEGEL ONLINE that an international company based in Hollywood had approached them with plans to make a film about Yvonne’s adventures.

“We would have never thought of making a film about her. We were only ever interested in her welfare as a cow,” said Britta Freitag, a spokeswoman for Gut Aiderbichl, the sanctuary that offers a home to neglected animals, including 400 cows.

But Yvonne’s story is perfect movie material. According to her Wikipedia page (Yes, she has one!):

Yvonne was born in 2005. She had lived as a dairy cow for a mountain farmer in a valley called Liesertal in the Austrian Alps. In March 2011 she was sold to a farmer in Aschau am Inn, Bavaria. He planned to fatten and slaughter Yvonne. On May 24th, 2011 Yvonne escaped from the electric-fenced grazing land of her farmer and kept hiding in woods near the villages Zangberg and Stefanskirchen. Multiple techniques were used to find her or draw her out of hiding. Searchers used infrared cameras, a helicopter, and other cows used as lures. As all attempts to capture Yvonne failed, the cow received more and more attention from the mass media in Germany and Austria and later all over the world. She was finally caught on Sept. 2 by a local farmer who lured her into a field. She put up a heroic fight, but was tranquilized and taken to a Gut Aiderbichl sanctuary in Deggendorf, Bavaria.

Wow! Drama, action and most importantly, a happy ending. Caretakers at the Gut Aiderbichl Sanctuary say that they have gone to great lengths to let her live out her days in comfort, with top-quality food and her very own paddock. To make the story even more perfect, she has even been reunited with her family.

“She is doing very well,” said Freitag. “We have brought in her second son, Orky, to Deggendorf. He will join her and her other son Friesi.”

According to ScreenDaily.com, U.S. producer Max Howard and Munich based Papa Löwe Filmproduktion are partnering with Torsten Poeck and UK-based writer/producer Kirsty Peart on the development of the partly animated family feature film, “Cow On The Run.”

The project is currently slated for a 2014 release.