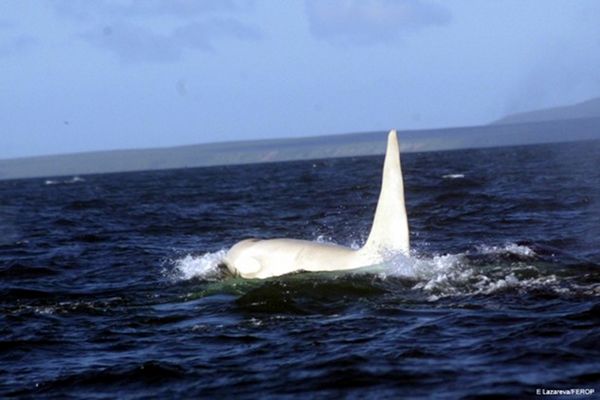 Researchers from the Far East Russia Orca Project (FEROP)  have revealed that they successfully caught the only known all-while adult orca on film, back in 2010. The discovery was made during a research cruise off the eastern coast of Russia, near the Kamchatka Peninsula and the Commander Islands in the North Pacific.

The scientists named the killer whale “Iceberg” after they saw his towering six feet white dorsal fin breaking the surface and decided to hold back on releasing photographs until they were able to study him further.

“This is the first time we have ever seen an all-white, mature male orca,” Erich Hoyt, co-director of the FEROP told the Associated Foreign Press. “It is a breathtakingly beautiful animal.”

The orca appears to be healthy and interacting normally with the other nearly one dozen whales in its pod, according to Hoyt. “In many ways, Iceberg is a symbol of all that is pure, wild and extraordinarily exciting about what is out there in the ocean waiting to be discovered,” said Hoyt, in a statement. “The challenge is to keep the ocean healthy so that such surprises are always possible.”

Hoyt wrote in a blog post that his team was hoping to meet Iceberg’s pod again in summer 2012 and learn more about the phenomenon of white whales, why they occur, what it means and whether Iceberg is a true albino — perhaps we can catch a glimpse of a pink eye — or ‘just’ one of the most beautiful orcas anyone has ever seen.

White orcas have been sighted  before, but they were young, including one with a rare genetic condition that died in a Canadian aquarium in 1972.

Watch the video the researchers captured below: