WATCH: A Blind Dog Gets a Seeing Eye Dog 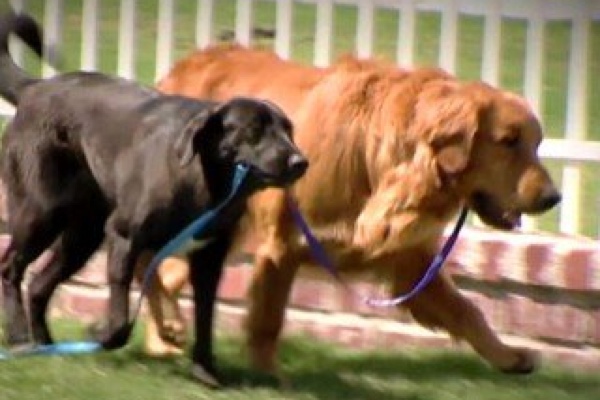 Tanner was dropped off at the Woodland West Animal Hospital in Tulsa, Oklahoma by a local rescue organization that was not equipped to treat him. The Golden Retriever was born blind, and with a debilitating seizure disorder.

Meanwhile, a 1-year-old black Labrador mix named Blair was brought to the hospital after being shot while living on the streets. Blair remained at the clinic after recovering from her wounds, but her understandably timid and nervous demeanor made it difficult to place her with an adopted family.

A few months ago, a chance encounter between the dogs changed both of their lives for the better. The hospital’s director, Dr. Mike Jones explained: “One day they were exercising in a play yard together and they got together. Blair all of a sudden seemed to realize that Tanner was blind and just started to help him around.”

After Tanner and Blair established their friendship, Tanner’s regular seizures decreased considerably. Likewise, Tanner has had a calming influence on Blair, who now seems much less anxious and timid.

Jones also noted: “We’ve worked with a lot of different service dogs to provide these services for people. But it’s the first time I’ve seen anything like this, the special relationship these two dogs have.”

The hospital is now working to find the right home for this special pair, who “absolutely have to be adopted together.”