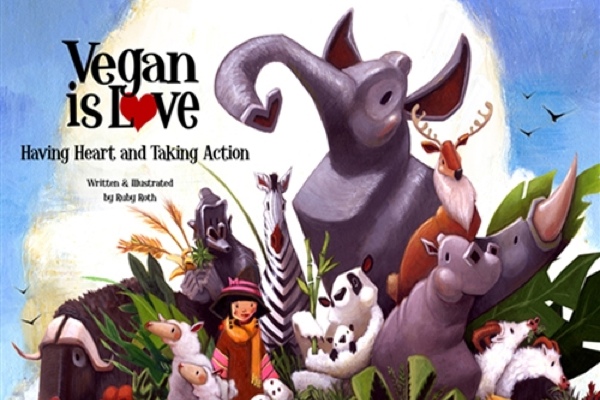 Roth is the author of two children’s books about veganism – “Why We Don’t Eat Animals,” published in 2009, and her latest book, “Vegan Is Love,” is due out on April 24. The book discusses clothing choices, animal testing, using animals for entertainment, and eating habits.

In a statement about her book, Roth noted: “Instead of worrying or ‘occupying,’ I decided to write a book for a new generation who will need to think, eat, and treat the environment differently if we are to solve the most looming health and environmental issues.  With vegan choices, we can affect every major industry and reach every corner of the world.”

Critics of the book argue that children are too impressionable to be exposed to such a sensitive topic. One registered dietitian was quoted: “It could easily scare a young child into eating vegan, and, without proper guidance, that child could become malnourished.”

However, the Academy of Nutrition and Dietetics disagrees, noting that vegan diets “are healthful, nutritionally adequate and may provide health benefits in the prevention and treatment of certain diseases. Well-planned vegetarian diets are appropriate for individuals during all stages of the life-cycle including pregnancy, lactation, infancy, childhood and adolescence and for athletes.”

Nutrition expert Joy Bauer concurs, pointing out that vegan diets provide all the nutrition growing children need, and typically include more of the “good stuff” than the standard American diet.

This isn’t the first piece of recent news questioning the appropriateness of a vegan diet for children. Earlier this week, the New York Times published an article arguing the potential for nutrient deficiencies in vegan babies and children.

For those who have chosen to raise vegan children, check out our article Raising Children Who Are Glad to Be Vegan for great tips on making veganism a family celebration.