LISTEN: An Interview on Public Radio Turns Into a Heated Vegan Debate 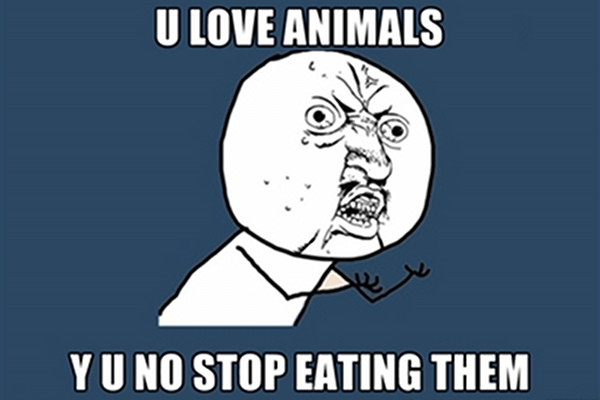 Jenny Brown, founder of Woodstock Farm Animal Sanctuary appeared on WNYC’s Leonard Lopate show to talk about her recently-released memoir, The Lucky Ones: My Passionate Fight for Farm Animals.

Jenny has a fascinating story and undoubtedly deserved the airtime. She fought cancer at the age of ten and lost a leg because of it, was drawn to animal activism because of a close relationship with a cat named Boogie and eventually gave up her career as a film producer, director and post-production supervisor to become a passionate advocate for animals.

This should have been a stellar interview about Jenny’s incredible journey that led her to start a Farm Animal Sanctuary that provides shelter to hundreds of animals who have been rescued from cases of abuse, neglect and abandonment.

The interview started out well, but quickly went off the rails when guest-host Julie Burstein decided to ask Jenny if one of her aims was to “try and get everyone to become vegan” and proceeded to incessantly quiz Jenny on veganism being “radical.” Burstein seemed to be irked by the fact that some people who may want to live a vegan lifestyle may not be able to do so due to “dietary” or “medical” reasons. Burstein also went on to suggest that for those who can’t be vegan, buying humanely raised animal products could be a “compassionate” option.

Brown didn’t seem very pleased with the line of questioning and dismissed the idea of “humane slaughter” as an “oxymoron.” “It’s radical to you but I consider myself radically compassionate,” said Brown. She went on to say that “We keep these animals in concentration camps…It is my hope is that in the next hundred, two hundred years we look upon the eating of living beasts with the same disdain and disgust as we look upon slavery, the lack of civil rights for women, the lack of child labor laws.”

Listening to a radio host and her guest clearly disagreeing on their personal viewpoints turned the interview into a fairly uncomfortable and awkward debate.

It’s definitely worth a listen and gets really interesting (read: heated) from minute 6 onwards.

Listen to it and let us know if you think Julie Burstein should have focused on Jenny’s story and book and kept her personal opinions out of the conversation? Could Jenny have handled the questions differently by being less confrontational and not comparing animal slaughter to “genocide” and “concentration camps”? Does using the word “compassion” as it relates to being vegan imply that those who eat animals are not compassionate people? Do you think conversations like these hurt or help animal advocacy?