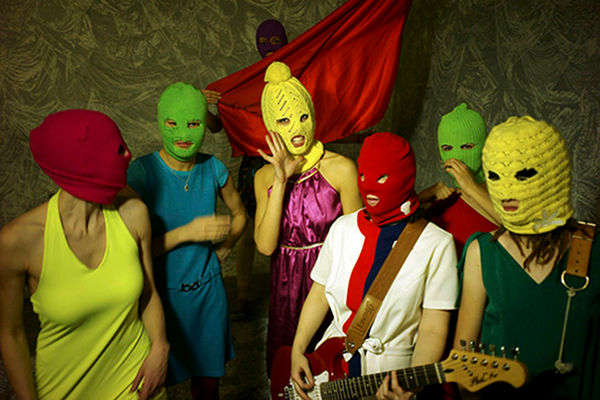 Members of the band Pussy Riot have garnered international attention and support since being imprisoned for performing an unauthorized concert at the Cathedral of Christ the Savior in Moscow. During the performance, the band challenged both the Russian State and the National Orthodox Church by asking the Virgin Mary to help them get rid of Putin, and implied in one of their songs that senior bishop Patriarch Kyrill’s loyalties didn’t lie with God but with the Russian President. The three young women — Nadezhda Tolokonnikova, Mariya Alekhina and Yekaterina Samutsevic  could be sentenced to 7 years in prison and have received support from several international artists and musicians, including Madonna, Björk, The Red Hot Chili Peppers and Sting.

One of three imprisoned members, Maria Alekhina, who is a vegan, reportedly collapsed from hunger during a recent court hearing. Her defense lawyer said was a reaction caused because the defendants are being deprived of sleep and are poorly fed. “Maria Alekhina suffered a severe drop in blood sugar levels this morning. This is linked to the fact that she is a vegan,” and her diet in prison caused problems, Polozov told AFP.

Now Alicia Silverstone  is standing up for the band by saying that the members of Pussy Riot should have access to a healthy vegan food while on trial. The actress wrote a letter to Russian president Vladimir Putin saying “As a vegan myself, I was deeply concerned to learn that one of the women, Maria Alekhina, who is a vegan, reportedly collapsed from hunger during a court session. I respectfully request you to ensure that vegan meals are available to Ms Alekhina – and all prisoners.”

Alicia continued “Regardless of the trial and its outcome, I’m sure you can agree that everyone has the right to show compassion and refrain from harming animals by being vegan.”

Interestingly, Alicia’s letter made no mention of Pussy Riot’s fight for freedom of speech and opposition of government oppression. Perhaps a missed opportunity to draw attention between the mentality that underlies all forms of oppression (whether directed at people or animals)? Share your thoughts in the comments below!