Secret Dangers Lurking in Dried Fruits and How To Avoid Them 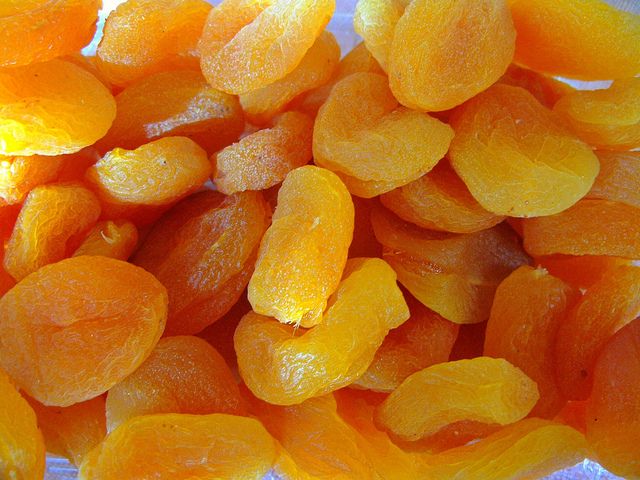 Who doesn’t love dried fruit? It’s the perfect on-the-go snack, a boost of sweetness when you have a craving, an excellent source of fiber, and according to the USDA’s My Plate Dietary Guide, it counts as a nutritional equivalent to a serving of fresh fruit. But can something so deliciously amazing and convenient be all it’s cracked up to be? Well, the answer is: that depends.

Drying fruits is one of the oldest methods of food preservation. Originally, it was done in the sun or over low heat, but modern appliances like dehydrators or low heat ovens make drying foods much easier and simpler. However, modern food science and mass-production has vastly altered the dried foods available in stores. That delicious fiber-filled dried apricot may not be the nutrient rich snack you think it is! Here are some secret dangers lurking in dried fruits and how you can avoid them.

The number one danger in many commercially available dried fruits is sulfur dioxide. Sulfur dioxide is an unpleasant smelling gas that is created by burning coal or oil, and used as a disinfectant, a bleaching agent or as a food preservative. When treated with sulfur dioxide prior to drying, fruits maintain their color and flavor, as well as extend their shelf life. While the U.S. National Library of Medicine does not consider sulfur dioxide to be harmful for healthy people to consume in small amounts, according to Food Matters, the acceptable daily intake for a 10-year-old weighing 21kg (roughly 46 lbs) is just 15mg of sulphite per day; that’s the equivalent of one dried apricot.

Sulfur dioxide exposure can be very harmful, even deadly to asthma sufferers and those with sulfite allergies or sensitivities, and is a toxic and dangerous chemical to both our bodies and the environment.

To avoid sulfur dioxide in your dried fruit, look for organic brands, and read the labels thoroughly, or make your own! While the versions without chemical additives won’t be as vibrantly colored, they will taste great and will last longer when stored in the freezer.

Drying fruit removes water, concentrating its natural sugars, like fructose, and creating an energy dense food. However, fructose won’t cause the spike in blood sugar like many sweets and snack foods do. And while the calorie count may be higher, dried fruits may actually provide more fiber, vitamins and calcium.

The problem is that many commercially available dried fruits contain extra ingredients for marketability. When dried fruit is pumped up with sugar, saccharine and other artificial sweeteners, eating it can lead to that blood sugar spike, which contributes to type 2 diabetes, cardiovascular disease, and many other problems. Be certain to read labels.

Look for sugar free versions, or dried fruit sweetened with natural fruit juices. With a little attention and awareness, dried fruits can be a nutritious, convenient and delicious way to add sweetness or variety to your diet. If you’ve got a hankering, try drying your own! Check out this fantastic recipe for Chickpea, Sweet Potato, Kale, Green Olive, Dried Fruit and Cashew Tangine.

Because dried fruit is an energy dense food, it’s easy to over-consume these sweet treats. Eating a few handfuls of dried apricots or mangos is an easy task, but eating the fresh equivalent in one sitting would be unusual. And in order to digest it, your body must use its own fluids to reconstitute the fruit. A small amount of dried fruit can yield a much larger amount of reconstituted fruit, which can lead to bloating and dehydration. So it’s very important to be mindful of how much dried fruit you are eating at once, and to drink plenty of fluids when you do. As a general rule of thumb, a half cup of dried fruit equals approximately one cup of fresh fruit.

Make individually portioned snack bags of nuts and dried fruit, so you won’t run the risk of eating too much sugar in one sitting. Make your own superfood trail mix.