How is Michelle Obama’s White House Vegetable Garden Holding Up Under Trump?

“I take great pride in knowing that this little garden will live on as a symbol of the hopes and dreams we all hold of growing a healthier nation for our children,” said Michelle Obama of the garden in October 2016.

Before Barack Obama left office, the former first lady renovated the garden, adding stone, cement, and steel to make it a permanent fixture on the South Lawn, as well as making it much more difficult for a future president to remove.

“I think people would be really upset,” landscape historian Marta McDowell told Politico, saying, “If it were taken out, it would truly just be a political statement.”

“I am hopeful that future first families will cherish this garden like we have,” said the former first lady.

So, how has the Obamas’ vegetable garden been doing with Donald Trump in office? 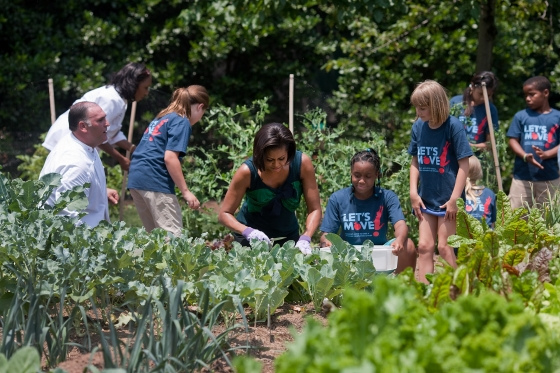 It was unclear when Trump entered office what would become of the garden.

First Lady Melania Trump made her first public appearance in the garden in September, as historian Anastasia Day noted in her Washington Post piece on the garden.

While the Trumps have not had involvement in planting veggies in the garden, the first lady did harvest vegetables during her appearance. The Balmain flannel shirt that Melania Trump wore to pick the vegetables reportedly cost $1,380.

“I’m a big believer in healthy eating because it reflects on your mind and your body,” Melania Trump told children who came to the garden during the harvest. “I encourage you to continue to eat a lot of vegetables and fruits, so you grow up healthy and take care of yourself.”

The White House continues to hold public garden tours and produce continues to be planted by staff at the Park Service, but the Trumps’ lack of direct involvement with the vegetable garden speaks volumes about their priorities with regards to nutrition and access to healthy food, as Day points out.

The hands-off approach to the vegetable garden reflects Trump’s policies – as part of NAFTA renegotiations, the Trump administration is reportedly seeking to limit mandates for the labelling of foods high in calories, salt, and added sugars. The administration has also proposed major cuts to nutrition assistance programs like SNAP.

“For Michelle Obama, the garden was paired with concrete improvements to federal policy and pro-health cultural shifts in America,” Arabella Advisors senior managing director Eric Kessler told Politico. “When this White House holds a garden event, you have to assume it’s meant as a distraction from some policy shift that will make good food less accessible to families that need it most.”