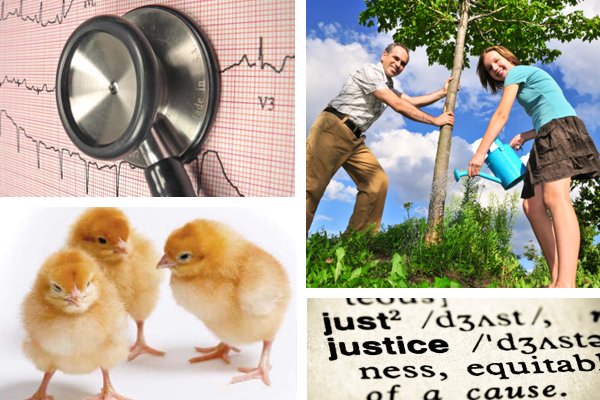 There are numerous paths that can lead a person to veganism, and it largely depends on their life experiences, interests, outlook on the world and the timing of when certain issues are brought to their attention. You can ask 10 different vegans and although you may find similarities in their stories, going vegan is a very personal decision and therefore all attempts to make sweeping generalizations are destined to fail. Everyone (non-vegans included) think that they know why people go vegan and what vegans are supposed to be like. Further, there’s no shortage of stereotypes about vegans, but the truth is, we’re a diverse bunch and we all have our own reasons why we decide to take the step to change our lifestyle, no matter how challenging it may have seemed at the time. Here are 5 common reasons people go vegan:

Many people who turn vegan are first drawn to it because they hear or read about the tremendous long-term health benefits of eliminating artery clogging and disease-accelerating animal products from their lives. Some specifically turn to a plant-based diet to improve their health and well-being and eventually adopt the vegan lifestyle because of the numerous negative impacts of animal agriculture on animals and the planet. In recent years, the health argument for veganism has gained tremendous traction, as several scientific studies have confirmed what vegans have been saying for years – you don’t need to consume animal products to live a healthy life; in fact, consuming a diet of plant-based whole foods is undoubtedly the healthier choice.

If you haven’t noticed the mainstream rise of the green movement in recent years, you must be living under a rock! As the impacts of accelerating climate change have become more widely known, the need for us to take steps to curb the destruction of our precious planet has become abundantly clear. Industrialized animal farming is a huge factor that is contributing to environmental degradation and the facts are so compelling that anyone seeking to live a more sustainable or eco-friendly lifestyle cannot help but question the impact of their food choices on the environment. Similar to those drawn in by the health argument for veganism, once people learn about industrialized animal farming and the horrific treatment of animals in factory farms, embracing the animal-free lifestyle beyond their plate becomes a logical next step.

Long before the health and environmental benefits were brought to the forefront of the argument in support of adopting a vegan lifestyle, people have been going vegan solely for moral reasons. Anyone who admires or adores animals has probably (at some point in their lives) questioned whether there is any difference between the animals they care for and protect and those that we breed and kill for food. Some of us find a way to justify this clear disconnect, citing physiological, historical, cultural and other reasons why we are meant to eat and use animals. While others realize that these amount to nothing but excuses and that the only sensible first step that anyone who loves animals can take is to not eat them. This easily transitions into the broader realization that no form of animal use is morally justifiable and that we shouldn’t be wearing them or using them when animal-free alternatives exist.

Anyone who is opposed to injustice in the world, should pause and think about the fact that we breed and kill billions of animals on an annual basis, just so that we can eat them. People who passionately believe that the world would be a much better place if we all learned to look past our differences and embrace the common ties that bind us will eventually have to confront the injustice we inflict on animals for our pleasure, convenience and entertainment. If you oppose racism, sexism and other forms of discrimination based on class, sexual orientation, physical appearances or abilities, then veganism can be looked upon as a natural extension of the belief in equality. This doesn’t mean that humans and animals are the same in every way and animals need to enjoy the same rights as human beings. What this means is recognizing that animals do not exist solely for us to use them as a means to an end.

We don’t mean to imply that all the other paths to veganism are not logical ones. However, many people turn to veganism because of a combination of all the above factors. They turn to this lifestyle choice as the most meaningful step one can take against institutionalized systems of exploitation of living beings, to do something positive for their health, the environment and to live in a manner that reflects their ethics. Veganism is a logical choice because it is good for us, for animals and the planet. If you respect life, you should not directly or indirectly participate in the exploitation of life; if you respect nature, you cannot support industries that contribute to the destruction of our natural world, and lastly, if you value your own existence, you wouldn’t want to consume products that can have a detrimental impact on your health. It’s that simple, and you don’t need elaborate theories, complicated moral reasoning and a billion scientific facts to help you arrive at veganism as the solution.

Ultimately, the path you choose to get to veganism does not matter; what truly matters is you begin the journey and stay the course!