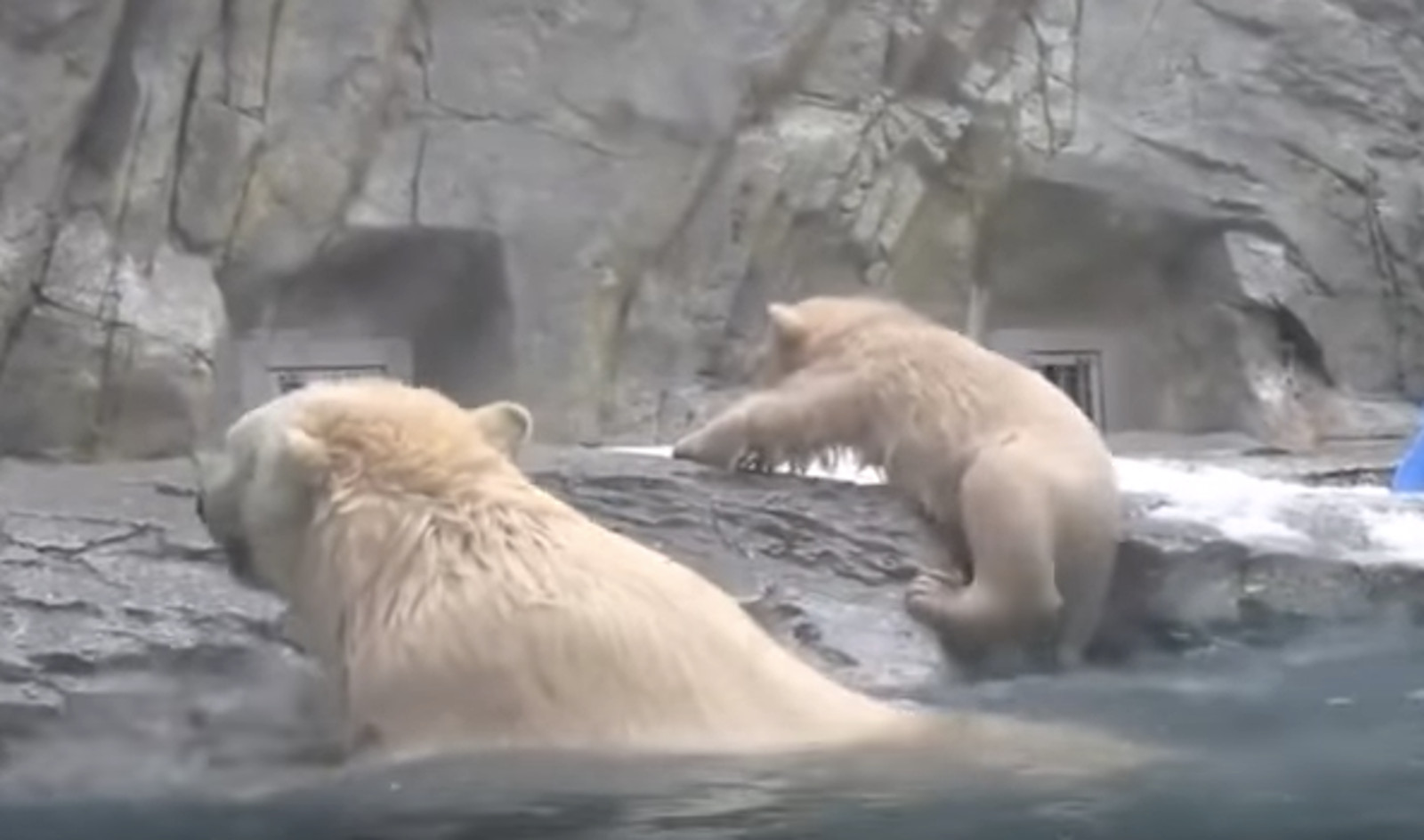 Do you ever feel sometimes that no matter what situation or trouble comes your way, your mom will be able to make it better? That’s the incredible power of unconditional love and protection that our moms give us. The same goes for all of the animal babies of the world. While we might think that the bonds forged between mothers and their babies are unique to humans, this is hardly the case. When a cub, calf, or chick is in danger, their mothers will always come to their protection – granted they’re allowed to. Tragically, humans have a way of impeding animals ability to function in this manner. Whether it’s because we’ve separated mothers and babies and locked them in zoos or poached one so the other could be sold, we have a way of causing undue harm to the world species.

Knowing this, the video below of a mother polar bear saving her baby from a pool in their zoo enclosure is so heartbreaking.


Here we see the ultimate display of motherly instinct. The second the baby shows a sign of fear and struggle, the mother turns around and leaps into action. Her swift and calm demeanor speaks to the eternal wisdom mothers have, knowing exactly what to do to ensure the safety of their babies.

Within minutes, the baby is safe on land – away from the most immediate harm. But there still lingers a tinge of sadness in this. When you zoom out of this scene and start to think about the circumstances that this mother couldn’t save her baby from, suddenly the looming danger shifts away from this pool, and onto humans.

The polar bear species is in grave danger because of our actions. Rampant global climate change, driven by man-made greenhouse gases – largely resulting from animal agriculture – has caused the polar bear’s Arctic home to disappear. Without ice to sustain them while hunting, polar bears are being pushed to scavenge for food – even traveling into human territory, forced to search through garbage piles for survival. In an effort to “conserve” these animals, captivity has been posited as an answer to preserve them. But in “protecting” them, we’ve only caused so much more harm to these animals.

Focusing on just ensuring there are polar bears on the planet – regardless of where – is one of the worst things we could do for these animals. Taking polar bears out of the wild and enclosing them in a glorified ice box causes a tremendous amount of mental and physical damage to these animals leading them to exhibit stereotypic behaviors such as rocking back and forth or pacing mindlessly. According to Polar Bears International, “Some 85 percent of North American polar bears [in zoos] do it, devoting nearly a quarter of their ‘active day’ (i.e. the time they spend alert and moving) to this behavior.”

If anything, this image is a harsh reminder that we owe these incredible animals so much more than a life in captivity. We owe them their wild home and a life free from the threat of starvation, boredom, or any other harm inflicted by humans.

The only way to really protect these animals is by saving their habitat – and this is something we can all do every single day by simply choosing to #EatForThePlanet. The United Nations Food and Agriculture Organization (FAO) estimates that livestock production is responsible for 14.5 percent of global greenhouse gas emissions, while other organizations like the Worldwatch Institute have estimated it could be as much as 51 percent. Additionally, this destructive industry currently occupies over half of the world’s arable land resources, and uses the majority of our freshwater stores. This system causes rampant air and water pollution, land degradation, deforestation and is pushing countless species to the brink of extinction. And yet, one in eight people still suffer from food scarcity.

“The real war against climate change is being fought on our plates, multiple times a day with every food choice we make,” said Nil Zacharias, co-founder and Editor-in-Chief of One Green Planet, ”one of the biggest challenges facing our planet, and our species is that we are knowingly eating ourselves into extinction, and doing very little about it.”

As the leading organization at the forefront of the conscious consumerism movement, it is One Green Planet’s view that our food choices have the power to heal our broken food system, give species a fighting chance for survival, and pave the way for a truly sustainable future. By choosing to eat more plant-based foods, you can drastically cut your carbon footprint, save precious water supplies and help ensure that vital crop resources are fed to people, rather than livestock. With the wealth of available plant-based options available and One Green Planet’s Food Monster App, it has never been easier to eat with the planet in mind.