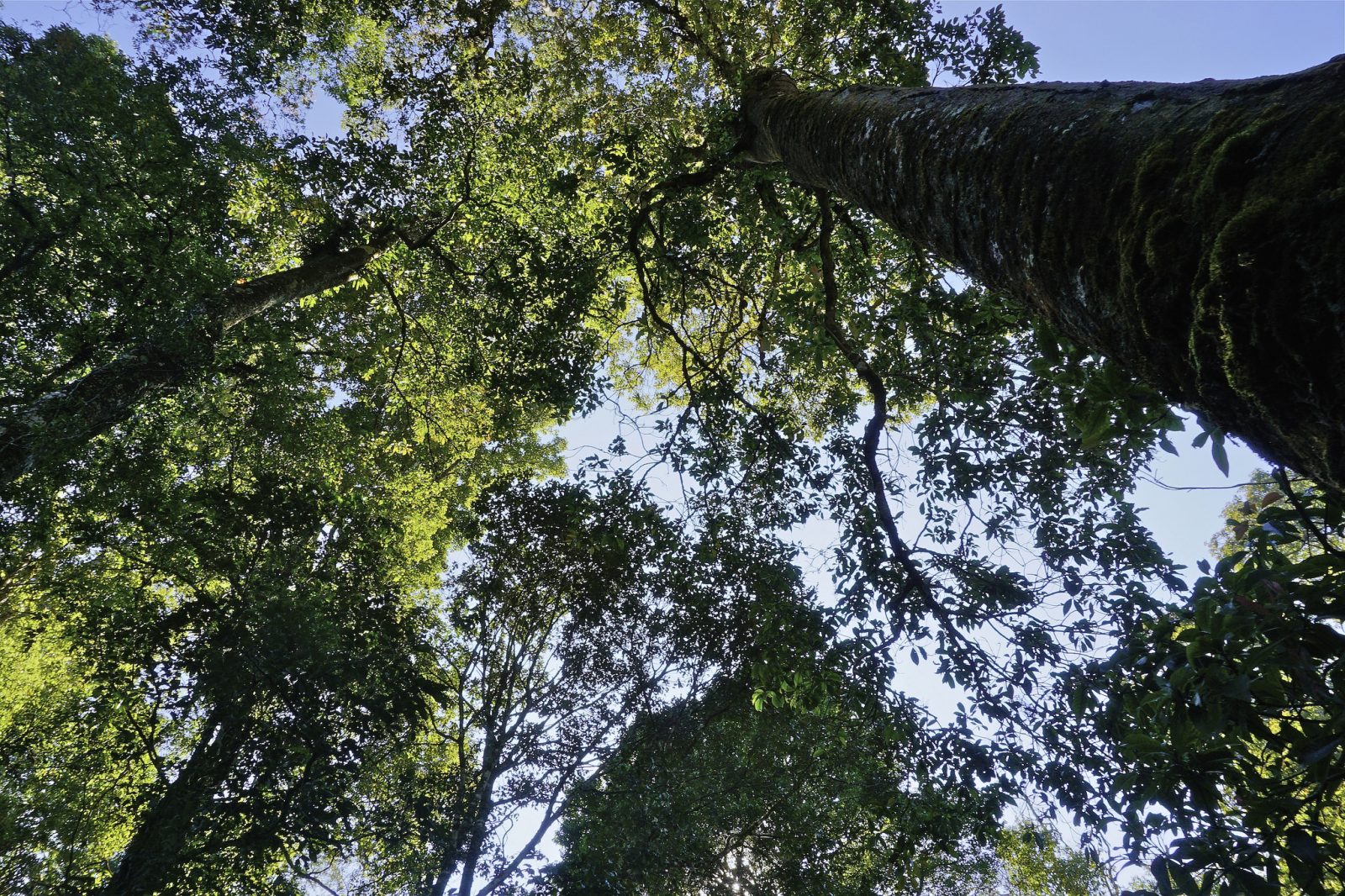 They provide oxygen, fight climate change, conserve water, improve air quality, preserve soil, support wildlife, and are some of the oldest and largest living beings on earth. Can you guess what we are talking about? If you guessed trees, you are absolutely correct. Trees play a crucial role in promoting a healthy and thriving ecosystem.

The last time there was this much carbon dioxide (CO2) in the Earth’s atmosphere, modern humans did not exist. Andrew Freedman, writer at Climate Central remarks, “Megatoothed sharks prowled the oceans, the world’s seas were up to 100 feet higher than they are today, and the global average surface temperature was up to 11°F warmer than it is now.” As we approach the record highest CO2 concentration in human history — 400 parts per million — climate scientists worry about the future of our planet. How do trees play a role in combatting the climate crisis? Trees absorb CO2, removing and storing the carbon while releasing the oxygen back into the air. In just one year, an acre of mature trees absorb the amount of CO2 produced when you drive your car 26,000 miles.

It’s not just about the trees, however. The soil beneath the trees holds more than twice as much carbon as the trees themselves. In the boreal forest, the world’s largest land-based biome located in Canada, the ratio is even higher, thanks in part to the region’s extensive wet spongy grounds of decomposing vegetation, also known as peat bogs.

Unfortunately, trees are at risk from a number of reasons that are all linked back to human industries.

The single largest direct cause of tropical deforestation is conversion to cropland and pasture to grow crops or raise livestock. The conversion to agricultural land usually results from a number of direct factors, such as the need to build roads in remote areas to improve overland transportation of goods. Many of the products we know and love from the grocery story such as bananas, palm oil, pineapple, tea, coffee and sugar cane are sourced from tropical countries that grow these crops in areas where tropical rainforests once thrived.

Then, there’s cattle ranching. Many rainforests in Central and South America have been burnt down in a process known as slash and burn farming to make way for cattle farming, which supplies cheap beef to North America, China, and Russia. It is estimated that for each pound of beef produced, 200 square feet of rainforest is destroyed. It’s no surprise then that in the past 20 years Costa Rica has lost the majority of its forests to beef cattle ranching. This unsustainable method leaves the land poor in soil quality and without a forest to keep the soil moist eventually causing the environment to become desert-like and dry. The grass grown for cattle also dies after only a few years. The cattle farmers then carry on in this destructive process to kill more trees. Considering around 45 percent of the world’s arable land is currently dedicated to the livestock system, if the demand for meat increases with the population, we will have no choice but to keep decimating rainforests. It’s estimated that if rates of deforestation continue, there won’t be any rainforests left in 100 years.

Logging is believed to be the second largest cause of deforestation. During the past 40 years, close to 20 percent of the Amazon rainforest has been cut down. This is more than all the previous 450 years since European colonization began. Timber companies cut down huge trees such as teak and mahogany to sell them internationally to make commodities such as furniture. Smaller trees are often used to produce charcoal. Vast areas of rainforest are cut in one go, in a process calling clear felling, and the most valuable trees are selected for timber, leaving the others for wood chipping. Much like the agriculture and cattle ranching industries, roads are created in order make the cutting and timber removal process easier. There are more than 105,000 miles (170,000 kilometers) of these roads, most made illegally by loggers to reach hardwoods such as mahogany for the profitable export market. The creation of these roads causes further damage to the environment.

As developed nations relentlessly increase their demand for metals and minerals such as oil, aluminum, copper, gold, and diamonds, rainforests pay a high price for their survival. These metals and minerals are often found in the ground below rainforests; therefore, the removal of trees that have been there for centuries is required to extract them. Poisonous chemicals are sometimes used to separate the waste from the minerals. For example, mercury, which is used to separate gold from the soil and debris with which it is mixed, makes its way into rivers, polluting water supplies which local people depend on. This process also kills fish and other animals that come into contact with the chemicals as well. According to WWF, over 1,000 square miles of the Amazon was clear-cut for small-scale gold mining between 2001 and 2013. This is just one example of the deforestation that occurs worldwide in pursuit of precious metals.

Rainforests that are in an area where natural gas is present are target zones for oil companies who are in search of new oil deposits. This incredibly devastating process damages untouched forests to build roads and pipelines to extract the oil. This contributes to animal loss and even extinction as well. According to a study by groups including Environmental Defense and Oxfam, in 2006, 70 percent of the Peru’s flourishing Amazonian rainforest was destroyed for oil and gas, up from just 13 percent in 2004. This year Peru is giving up an additional 22.2 million acres, an area larger than the state of Maine.

Once established, the oil pipelines are known to rupture, leaking gallons of oil into the surrounding forest, contaminating the water supplies of local villages and killing wildlife. For example, despite the Camisea in Machu Pichu generating some $700 million in government royalties in three years due to the fossil fuel industry, the environment has suffered from a series of contaminating pipeline spills and is accused by natives of ruining hunting grounds and fish holes.

Large companies such as The World Bank invest money in developing countries to build dams for the generation of electricity. This process can involve the flooding of large areas of rainforest. The submerged forest gradually rots, making the lifespan of dams short and the reservoir water acidic, which eventually corrodes the dam turbines. The dams can also become blocked with soil washed down from deforested highlands in heavy rains. This can cause great problems, such as flooding.

Few types of development projects bring up as much controversy as hydroelectric dams. They cause serious environmental damage and has been documented and studied within the past decade. Countries in Latin America and worldwide continue to depend upon hydroelectric dams for a major portion of their electric power.

How can each one of us help combat these problems? The answers lie in your daily lifestyle choices.

First, shopping. There is no better way to sustainably practice your consumer power than putting your money towards environmentally-friendly, health-friendly companies. Purchase your items from companies that build from recycled materials. Better yet, put your money towards companies that give back, and donate to organizations such as the Rainforest Alliance, who works to protect biodiversity and ensure sustainable livelihoods by transforming land-use practices, business practices, and consumer behavior. Check out our guide to buying sustainable, cruelty-free, fair trade clothing.

Next, know where your food comes from. As mentioned above, industries such as the palm oil industry can be very ruinous; however, there are companies who source their ingredients sustainably. To learn more about how to wean yourself off palm oil, click here. Is your food fair trade? Organic? Always read the food labels. Take it the next step further and do research online to ensure the foods you are buying are not sourced from destructive industries.

Lastly, ask yourself, what am I eating? Reducing the amount of meat and dairy you eat can have a huge positive impact on the planet. Did you know you could halve your carbon footprint by leaving meat off the menu? Learn more about how you can fight deforestation and protect endangered species with your food choices by checking out One Green Planet’s #EatForThePlanet campaign.