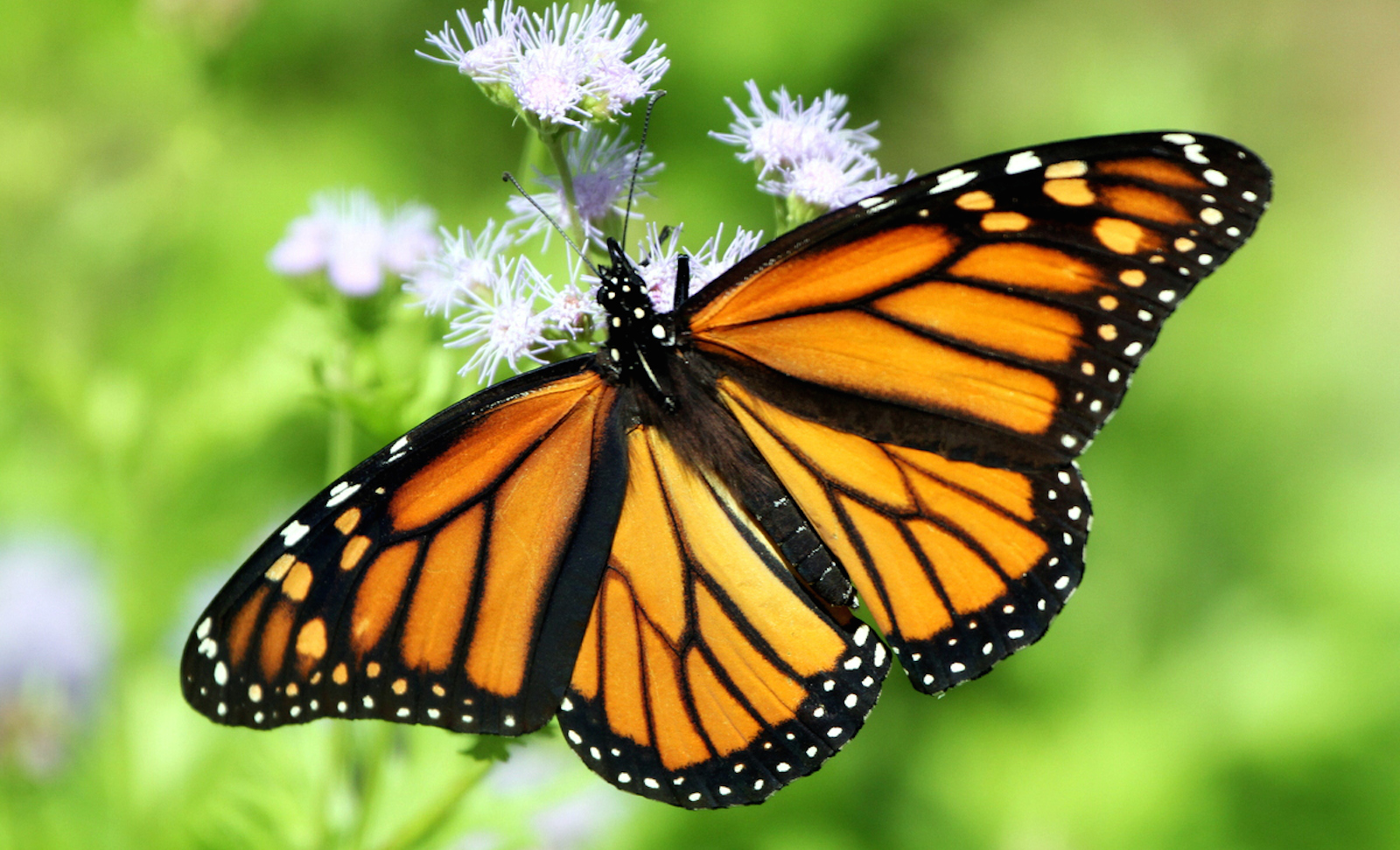 Long before the invention of the camera, Maria Sibylla Merian (1647-1717) merged her passion for art and the natural world to paint beautiful pictures of flowers, plants and later, insects. At that time, insects were thought of as “beasts of the devil.” Thanks to her vivid illustrations of their life cycles, Maria Sibylla Merian revolutionized the scientific study of insects.

At just thirteen years old, she began collecting insects and used them as specimens for research. One of her first observations was a silkworm metamorphosis. As she documented the life cycles of butterflies, moths and other insects, she discovered that many insects go through precise developmental stages. Her findings were reflected in her paintings, and her detailed drawings illustrated how insects can change from tiny worms into gorgeous winged beings. This finding contradicted the longstanding theory that insects were “made of mud,” forever changing how people viewed the butterfly and many other insects.

The work that Merian did to change public perception of the butterfly has acted as the groundwork for our current studies of these beautiful creatures. In Merian’s time, these animals were feared as being spawn of the devil. Today we know that these amazing insects are incredibly important to the health of their ecosystems. Their feedings, reproduction, and daily life all have an effect on other species, including humans. With populations of many species of butterfly declining, it is important to understand the effect the loss of the butterfly will have on the earth. It is a common case of the “Butterfly Effect.”

Butterflies and the Ecosystem

Butterflies are found on every continent but Antarctica. The U. S., alone, is home to about 700 different species of this beautiful and loved insect. Butterflies play a number of roles in the ecosystem. They act as a pollinator and as a food source for other species, acting as an important connector in a thriving ecosystem web.

Nearly 90 percent of all plants need a pollinator to reproduce and as bee populations drop, the role of the butterfly becomes even more vital. Without these wonderful insects, many plant species would then be unable to reproduce and their populations would dramatically decrease without the butterfly’s presence. We would see this effect in a number of plant species including wild flowers we have grown to love. This loss of plant life would affect both animals and humans.

Butterflies also provide assistance for genetic variation in the plant species they that they collect nectar from. Many species of butterfly migrate over long distances, which allows pollen to be shared across groups of plants that are far apart from one another. This helps plants to be more resilient against disease and gives them a better chance at survival.

Providing Food for Other Animals

Butterflies also act as a lower member of the food chain. They are a hearty meal for a number of animals, including birds and mice. As populations of butterfly diminish, so will populations of birds and other animals that rely on them as a food source. This loss of the butterfly is the beginning of the “butterfly effect.” It will continue to affect the entire ecosystem, working its way up the trophic levels. Nearly two-thirds of all invertebrates can be connected back to the butterfly on the food chain. The loss of this seemingly insignificant insect could, potentially, collapse entire ecosystems that rely so heavily on them. 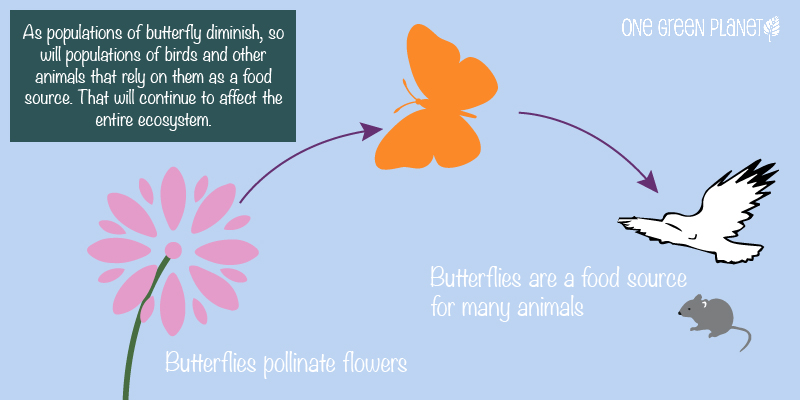 Threats to Butterflies and How You Can Help Them

Habit change and loss as well as climate change are the biggest threats to butterflies today. These delicate insects are incredibly sensitive to climate change and habitat loss and require ideal conditions for their eggs to mature. This sensitivity, though useful for monitoring the health of our ecosystems, is a downfall for the survival of many butterfly species. An abundance of butterflies indicates a healthy ecosystem, but if there is a subtle change in the environment, it can trigger an extreme drop in the butterfly population. While climate change has caused a significant amount of damage to butterfly populations, other human actions are also implicated in the butterfly’s decline.

Monarch butterflies, in particular, are suffering from these threats. These orange and black colored beauties were once common, but now, their population has fallen by 90 percent. The World Wildlife Fund and other organizations have come together and determined that the loss of the milkweed plant this species feeds on is the reason for the drastic decline in numbers. Interestingly, the expansion of genetically modified crops across North America has been linked to the decimation of milkweed.

The Monarch is not alone in their struggle and many other butterfly species are suffering from similar threats and population decline. But there is a way to help these wonderful insects.

First of all, never capture a butterfly. If you remove a member of an already struggling species, you are contributing to the uphill battle they must fight for survival. If you have children, encourage them to leave butterflies alone to fly free. We must do more than admire their beauty. We must protect them.

Like bees, butterflies populations can also be harmed by pesticides. A great way to help these insects survive is to eat more organic foods, avoid pesticides in your personal landscaping, and to start cultivating milkweed and other nectar plants in your own garden. You can also help by signing this petition to save the monarch butterflies. These insects need our help and we need their invaluable contributions to save entire ecosystems!