As the global population grows, so does demand for food production. More people mean a greater need for more calories and nutrition from farmers and food manufacturers. And that, in turn, means an increased pressure on the planet to provide enough water, space, plant nutrients, and ideal climate to produce more food. There’s no escaping the limitations of the environment. In realizing this, farmers and scientists are both seeking ways in which to produce food more efficiently. They recognize the need to change the current system because it is simply not sustainable.

Animal agriculture dominates our world’s food system despite the fact that it is highly inefficient as an enormous amount of resources are needed to produce the meat and animal products consumed across the world. Around 26 percent of land worldwide is dedicated for grazing livestock, while 33 percent of land is allocated for growing feed. In addition, around 70 percent of the world’s freshwater supplies are used for agriculture, about one-third of which is for livestock feed. Not to mention, the United Nations Food and Agriculture Organization (FAO) estimates that livestock production is responsible for 14.5 percent of global greenhouse gas emissions, while other organizations like the Worldwatch Institute have estimated it could be as much as 51 percent.

Seeing as the planet is set to reach a population of nine billion by 2050 and with it a growth in meat production for the foreseeable future, it’s important that we ask ourselves how to meet the demand for this food product. We need to produce faster supplies, larger supplies and supplies that eat up less money and resources. So, scientists and farmers have begun to experiment with many ideas to make meat more readily available to the growing masses.

Let’s take a look at some of the “efficient” ways scientists and farmers have attempted to produce meat, and discuss where these ideas come up short from an environmental standpoint. 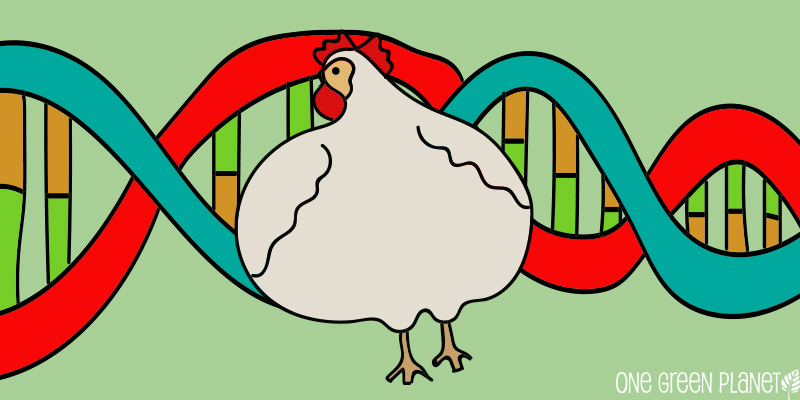 “Genetically modified” is certainly a popular and controversial topic these days. How does it impact the environment? Is it safe for human consumption? And how many lab rats are we going to put through the ringer to answer these questions? Currently, none of the meat or dairy available for consumption is genetically modified. And salmon is the only genetically modified meat that is closest to being available for human consumption. With growing demand for meat, it is understandable that scientists and farmers want to guarantee that production is as bountiful and efficient as can be. But tinkering with the genetics of meat poses the same risks that genetic modification of any organism can hold.

What about the threats to genetic diversity of agricultural animals that comes with genetic modification? Genetic diversity, or a variety in a specie’s genes, is vital for keeping the species as a whole healthy. It can help a species overcome challenges like disease and guarantees the entire population has a variety of adaptations and characteristics in its arsenal for survival. So why would we want to add a “sameness” to the genetic code of animals through genetic modification? Scientists have already noted a lack of genetic diversity in commercial chickens, making them more susceptible to disease. And if genetically modified salmon, or “frankenfish,” were to escape their aquaculture operations, they could cause entire species of wild salmon to go extinct.

It’s obvious that some genes may be desirable in animal agriculture, but having a variety of genes in an animal population is actually ideal. By eliminating genetic diversity in beef cattle or farmed salmon, we risk harming not only the supply of animals as a food source, but also the lineage and viability of the species themselves.

The Use of Steroids/Growth Hormones 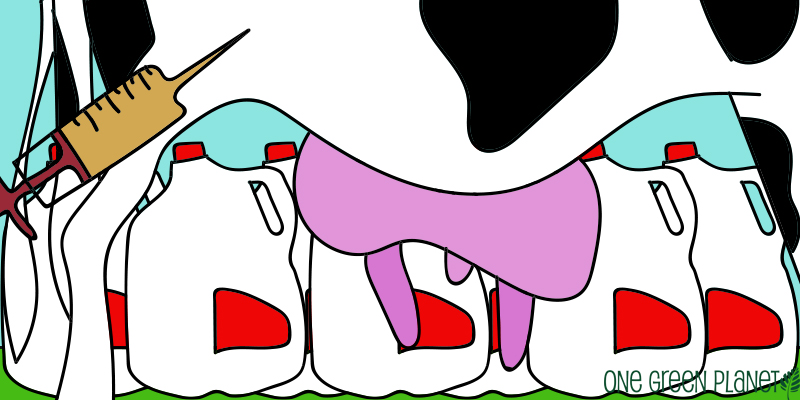 So, if we’re not going to tinker with the genes of animals we consume for meat, why not at least pump up the animals with growth hormones to maximize the output of the product? First, this isn’t a bodybuilding competition. Second, those little additions to your steak probably aren’t so good for you or the environment.

While the use of certain hormones and steroids in animal agriculture may be approved by the government, many disagree on exactly how safe they really are. Recombinant bovine growth hormone or rbGH has been used in dairy cows since 1993 to increase milk production. Sadly, lameness, mastitis, and reproductive problems in cows receiving rbGH have also increased. In response, more antibiotics are administered which end up in the surrounding environment and even your dairy products. This attempt to maximize output from animal protein really ends up creating bigger problems.

Pumping up beef cattle with steroids is another common attempt to maximize output. Unfortunately, it’s wreaking havoc on the environment. The various hormones administered to beef cattle end up being excreted and entering waterways as well as soil surrounding feedlots. Fish especially are sensitive to the hormonal soup they’re exposed to, and end up with altered reproductive habits and gender characteristics. And it’s not just animals that may experience the detrimental effects of hormones used is beef cattle- humans are also believed to experience damage to their endocrine systems when exposed to conventional meat. 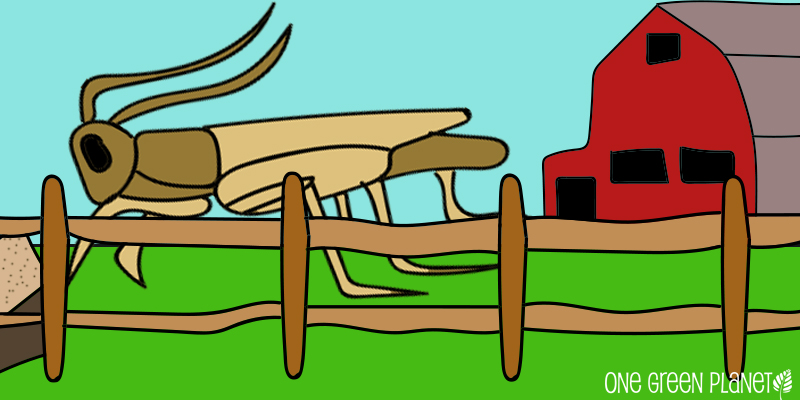 Insects are seen by some as the answer to our animal protein shortages. The UN touts insects as being nutritious food sources, and may even be an underutilized source of livestock feed. In comparison to traditional animal protein sources, insects also require less inputs for water, food and space and emit less pollution in return. Other than this food source being less appealing to modern Westerners’ palates, what’s wrong with insects as a protein source?

A recent study investigated which diets offered the most efficient conversion to protein in crickets. The crickets were fed a variety of foods including various grains and organic waste. At the conclusion of the study, scientists found that the crickets that ate a grain diet resembling poultry feed yielded the best nutritional results. And, underwhelmingly, they yielded a nutritional output that mirrored poultry. No real improvement in efficiency there.

Growing insects for human consumption can also carry some of the same problems that other animal agricultural operations carry. Large operations can harbor disease, fungus, and bacteria. Insects exposed to animal manure in their food sources may take on Salmonella, pesticides, and heavy metals accumulated in the waste. Even insects collected from the wild carry similar risks considering what they may have been exposed to prior to harvest. While insects are considered food sources in many cultures around the world, they do not appear to be an efficient solution for growing food demand. 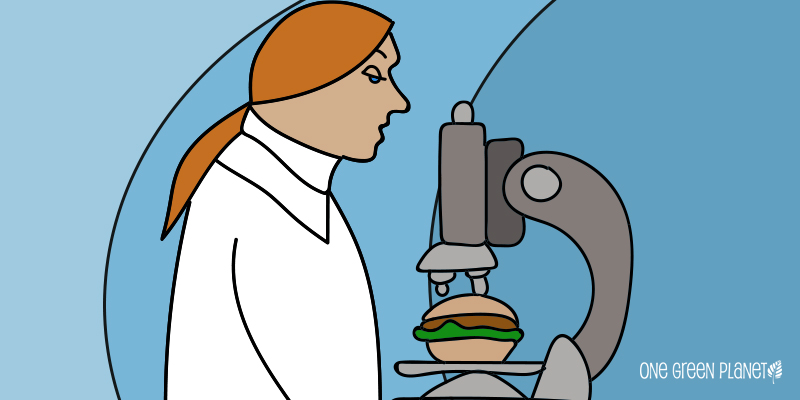 With increasing demands for meat produced in a sustainable and humane way, scientists have turned to in vitro meat as a possible solution. Essentially, cells are taken from a living animal and added to a petri dish filled with a nutrient-rich medium. The cells reproduce and, after some time, you’ve got a slab of beef! Okay, it’s a bit more complex than that, but that’s the basic idea.

So, meat without murder, factory farms, and pollution? This is an intriguing idea, but there are still some flaws. First, this technology is still pretty new and pretty expensive. In 2013, scientists cooked up the first petri-dish burger patty in London. The project was the result of five years of research and the five ounce slab of meat cost a whopping $330,000! That’s probably out of the price range of many consumers.

Even though in vitro meat is produced without directly being harvested from an animal, there are still a lot of resources that go into production of this kind of meat. Imagine the piles of petri dishes required to grow each piece of meat. And the massive labs needed to keep the meat at ideal growing conditions. Plus, the meat, which is technically muscle tissue, needs to be “exercised” by machines to stretch the product. You can’t just throw some cells into a dish and let them grow for a few months – there’s a lot of input into the process to make sure everything goes to plan.

Plants – Still Much Better For The Planet 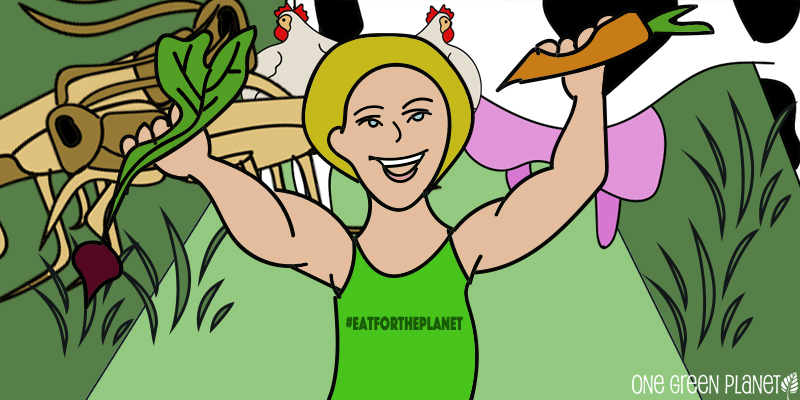 Despite the attempts of many individuals to feed a global demand for meat, it is easy to see where their efforts fail. Producing meat in these new and interesting ways may decrease some of the impact that meat production has on the environment, but it still falls short compared to a vegetable-based diet. Try as they might, meat producers just can’t match the efficiency of plants, nor the wonders a plant-based diet can do for animal welfare and the environment. If you think that picking a veggie burger over a beef burger or a salad over a salmon filet is gentler on your home planet, you’re right!

“This is not just an animal welfare or environmental concern, it’s also a humanitarian crisis,” says Nil Zacharias, Editor-in-Chief and Co-founder of One Green Planet, “because factory farms are diverting precious natural resources like land, water and fossil fuels to raise farm animals, while millions of people around the world are malnourished and still do not have access to safe drinking water.”

The science has shown that people who eat primarily plant-based have got it right when it comes to nurturing Mother Earth with their food choices. On the one acre of land needed to produce 250 pounds of beef, we could grow 50,000 pounds of tomatoes, 53,000 pounds of potatoes or 30,000 pounds of carrots. The average person who eats plant-based can save 162,486 gallons of water a year, and cut their carbon footprint in half. But the icing on the plant-based cake is the fact we could redirect enough grain from the livestock system to feed 1.4 BILLION people if every American stopped eating meat.

So, there you have your reasons to continue with a vegetable-based diet. Meat producers will certainly make a fair attempt to provide a product in a more efficient and sustainable manner. But you’ve already got the winning solution be sticking with plant protein.