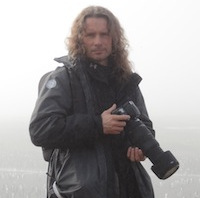 Erwin Vermeulen has been working for more than twenty years at sea. During his leaves he spent his time traveling around the world to a growing realization that all this natural beauty that he visited was in need of protection. Since then, he combines his job as chief engineer on an expedition cruise ship with volunteering for Sea Shepherd. Erwin has participated in campaigns in the Southern Ocean, the Mediterranean, the Faeroe Islands, in Taiji, Japan, the Columbia River in the U.S., the Gulf of Mexico and California. In addition, he helps as needed on ship management, repairs, and campaigns. Erwin became known worldwide when he was arrested in Taiji in Dec 2011 for allegedly pushing a dolphin trainer while trying to document a transfer of a dolphin to a captive facility. Erwin sat for months in the Japanese cell, because of false accusations and was eventually acquitted. Erwin also works with animal rescues and shelters locally. He is also a photographer and writer and contributes a bi-weekly column for Beep Today, an online blog in the Netherlands.