Links Between the Dolphin Slaughter in Taiji and the Faroe Islands 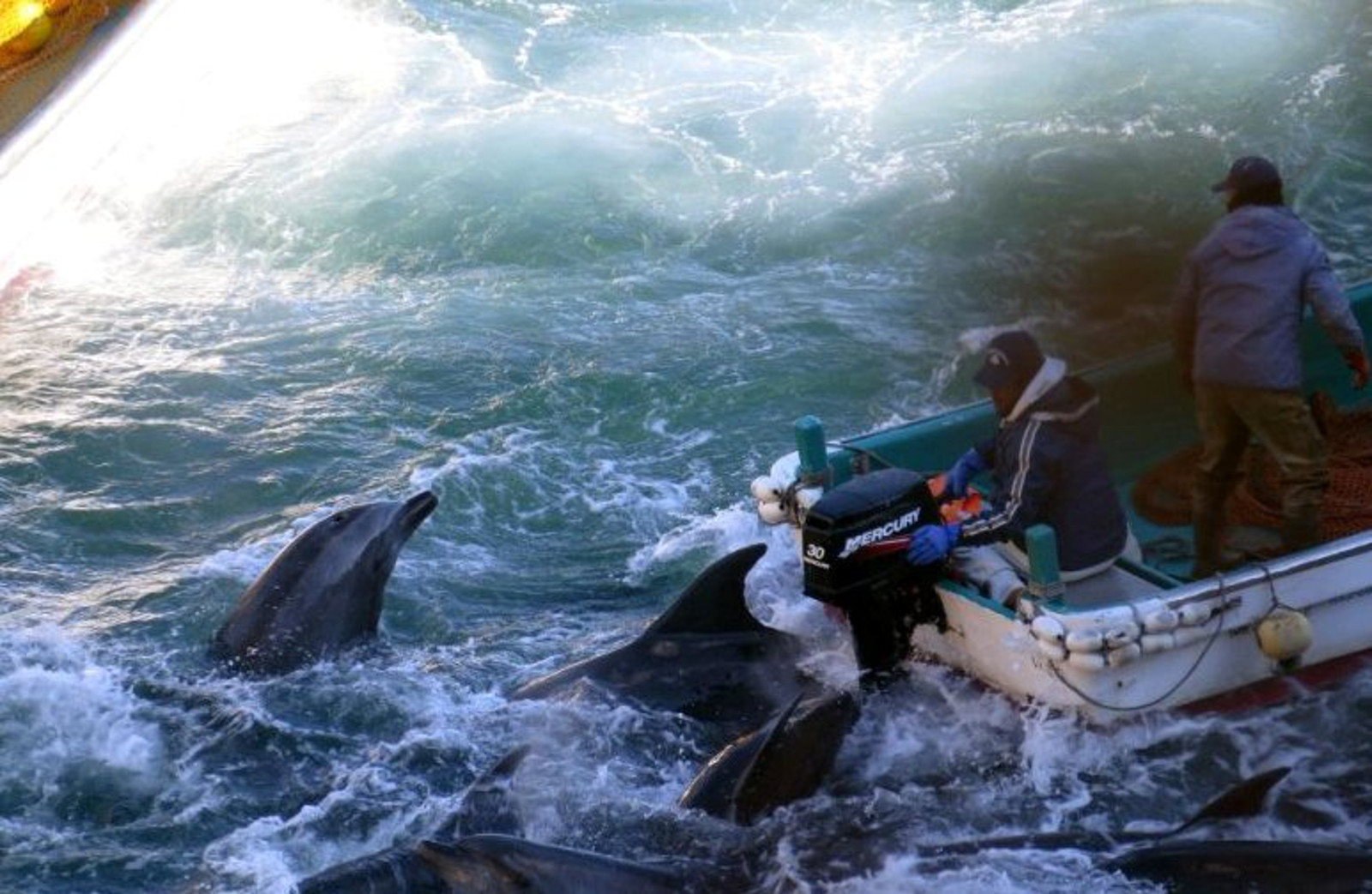 In January 2011, the German conservation group AtlanticBlue made undercover recordings of a pod of Striped dolphins being killed under the tarps in Taiji, Japan. The video showed for the first time the new killing method of “pithing” or “spinal cord transection.” When “The Cove” was filmed in 2007, dolphins were killed by arbitrarily stabbing them with spears or hand-held harpoons. The new method involves a repeated poking of a metal rod in the dolphins’ neck behind the blowhole to sever the spinal cord.

This procedure was first tested from December 2000 to February 2001 on nine Risso’s dolphins, four Striped dolphins, two Pantropical Spotted dolphins, and one Pilot whale, but wasn’t used until 2008 to kill large pods of Striped dolphins. As of 2009, a wooden plug is used to stop the bleeding that turns the Cove red.

The footage was analyzed by veterinarian Andrew Butterworth and his team and the results were published in a paper called: “A Veterinary and Behavioral Analysis of Dolphin Killing Methods Currently Used in the ‘Drive Hunt’ in Taiji, Japan.”

The conclusions of the report couldn’t be clearer:

“The method employed causes damage to the vertebral blood vessels and the vascular rete from insertion of the rod that will lead to significant hemorrhage, but this alone would not produce a rapid death in a large mammal of this type. The method induces paraplegia (paralysis of the body) and death through trauma and gradual blood loss. This killing method does not conform to the recognized requirement for ‘immediate insensibility’ and would not be tolerated or permitted in any regulated slaughterhouse process in the developed world.”

In the paper, they regularly refer to the English translation of a 2010 study by Toshihide Iwasaki of the Fisheries Research Agency and Yoshifumi Kai of the Taiji Fisheries Association, called: “Improved Method of Killing Dolphins in the Drive Fishery in Taiji, Wakayama Prefecture.”

This translation gives us a link between cetacean murderers on opposite parts of the world. Iwasaki and Kai indicate that the new killing method in Taiji was derived from the Faroese: 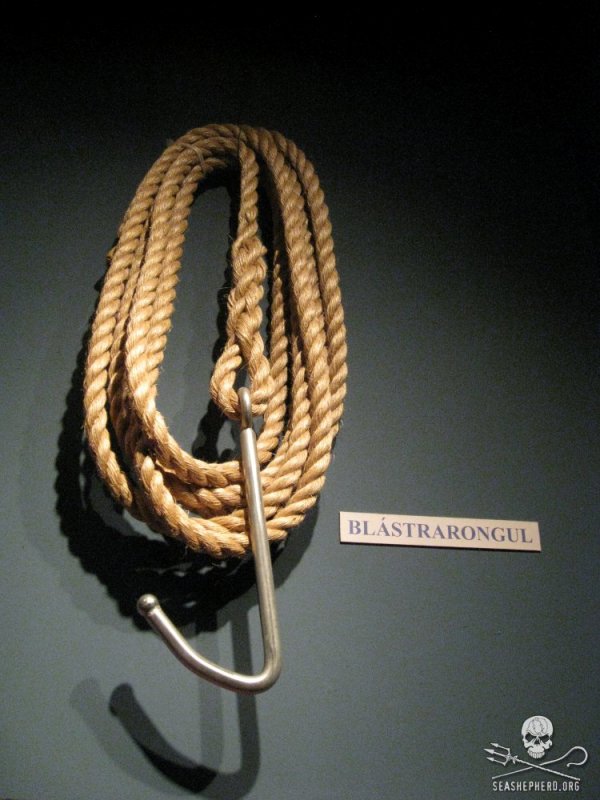 “In the ‘drive hunt’ (Oikomi) in Taiji, dolphins were killed using a spear-type instrument. However, in the Faroe Islands, methods to cut around the blood vessel plexus and cervical spine have been developed. This method results in a shorter harvest time, and is thought to improve worker safety. We report the results of the implementation of this method.”

The Faroese had started to use the mønustingari or spinal lance, a new knife with a slim blade designed to sever the blood supply to the brain and the spinal cord with one incision.

However, it has been slow to come into general use, as the new knife requires greater precision to be effective, and killers likely need to be specifically trained to use it.

Note that Iwasaki and Kai’s interest lies not in humaneness or animal welfare – they don’t care about the dolphin’s suffering. Improved worker safety and a speedy “harvest” are the goals.

Where they claim that the new method reduces Time To Death (TTD), this is refuted by the English/American report and the German video which shows one individual Striped dolphin that keeps moving for an agonizing 254 seconds, that is 4 minutes and 14 seconds, after being stabbed in this new “humane” way.

The ever-watchful eyes of the Cove Guardians regularly spot supposedly dead dolphins, being towed to the butcher house by a rope around their tail flukes, as they struggle to the surface for a last breath before drowning.

Iwasaki and Kai note that applying the wooden plug, and thus a delay in the bleeding out of the dead body, “did not affect the quality of the meat. […] This opens up the possibility of commercial utilization of the blood and prevents pollution of the sea with blood.” Again, it is clear that Iwasaki and Kai’s priority is not the lessening of suffering. Instead, they care about meat quality, profit, and preventing a red Cove.

“The individual who developed the spinal cord transection technique has pointed out that prevention of bleeding and internal retention of blood using the wedge risks prolongation of the time to death. An additional review to compare time to death with the Faroe Islands is required.”

Still Iwasaki and Kai claim that the new method is more humane, while the English/American report states:

“To penetrate the spinal canal, the rod would have to accurately enter the space between vertebrae (which provide overlapping bony protections) or to damage the cervical vertebral bone sufficiently to allow spinal cord severance. Either of these processes, if carried out with a rod after passage through muscle and other tissues, is unlikely to be applied with a high degree of precision. It appears from the video available and from a consideration of the anatomy that the approach is to push the rod hard and repeatedly and eventually there will be very significant damage and trauma and this will (eventually but not immediately) lead to the death of the animal.” 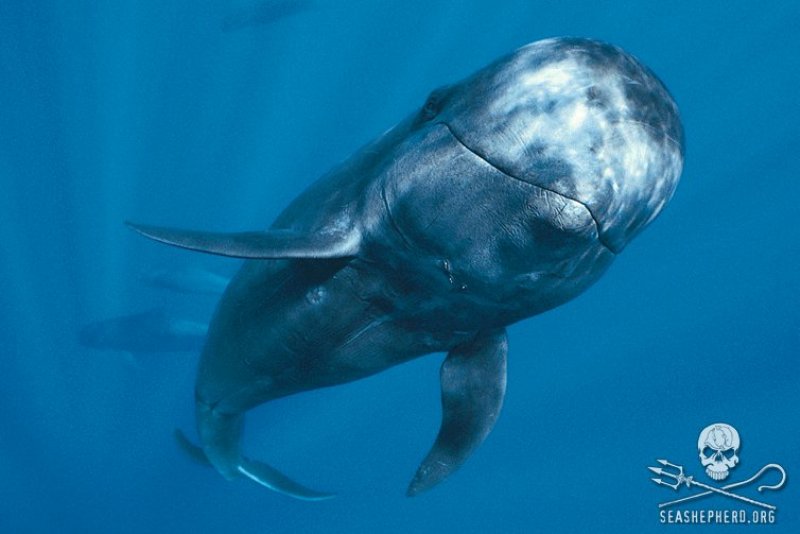 The report is a full condemnation of the entire drive hunt. Regarding the tethering of dolphins by the tail flukes, the dragging to the kill site resulting in involuntary submersion, and the close presence of the other pod members, the report states:

“This type of treatment would not be tolerated or accepted for commercially farmed animals being prepared for slaughter in the United States or Europe.”

“From a scientific, humane, and ethical perspective, the treatment of dolphins in the drive hunts sharply contradict current animal welfare standards employed in most modern and technologically advanced societies.”

“This method appears to be primarily focused on causing gross neural tissue damage to the spinal cord and potentially the brainstem. This will cause, initially, immobilization and eventually death due to lack of coordination of respiratory and motor function. The method described does not conform to any recognized mechanism for bringing about death in accepted humane slaughter or euthanasia practice in large mammals.”

“The process of spinal transection carried out in a fully conscious large animal is likely to be profoundly distressing, traumatic, and painful and creates unnecessary suffering and distress because a complete transection is difficult to achieve.”

“This killing method cannot be considered humane as it does not fulfill the recognized requirement for immediacy, and in fact may result in a prolonged aversive application of a violent and traumatic physical process followed by slow death by spinal paralysis and blood loss. This method would not be recognized or approved as a humane or acceptable method of killing for mammals in any setting.”

Iwasaki and Kai’s study leans heavily on a 1999 report by Faroese Pilot whale killing apologist Jústines Olsen, senior veterinarian in the Faroese. His paper is called “Killing methods and equipment in the Faroese Pilot whale hunt.” After venting his opinions on how traditional and cultural the Grindadrap is, even he has to admit, though he doesn’t use the same words, that there is no humane way to kill a cetacean:

“Given the circumstances of the pilot whale hunt, the traditional whaling knife is the safest and most effective equipment with which to kill the whales. However, as the slaughter is done manually it cannot, by definition, be instantaneous, which is the ideal in all forms of slaughter, including traditional slaughterhouse methods as well as hunting.”

“The pilot whale hunt in Faroes is a form of hunting. The best possible slaughtering techniques will therefore also be conditional upon the environment in which the hunt takes place and the requirements for the safety of those who take part.”

What he is saying is that, because the environment in which the killing takes place consists of standing to your waist in cold water, often in temperamental weather and regularly at dusk, among hundreds of large panicking, trashing mammals and because the safety of the murderers comes first, we should accept the suffering of the Pilot whales as part of the hunt and the Faroese’s precious cultural tradition. He, as a senior veterinarian, is asking for double standards for domesticated and wild animals.

As we in the developed world have largely accepted that suffering is undesirable for any living creature, and governments have set minimum standards for the treatment of domesticated animals, we cannot accept that these standards are diluted when they cannot be met in a wild setting. Instead, we should accept that there is no humane way to kill a cetacean and call off these inhumane hunts.

There is one more thing that Taiji and the Faroes have in common: the undivided attention of the international Sea Shepherd movement and the determination to end these barbaric practices. Please support our volunteers on the Infinite Patience campaign in Taiji and the upcoming 2014 Grindstop campaign in the Faroes.