This is a story about a pup named Chris who was reunited with his owner after a kind stranger traveled 500 miles to bring them back together. This emotional reunion was all made possible because Chris’s owner had a microchip inserted. Owner, Stacey Staton Elam was alerted that someone had found Chris after he had escaped his leash on a walk and traveled 500 miles away from his north Alabama home back in February! 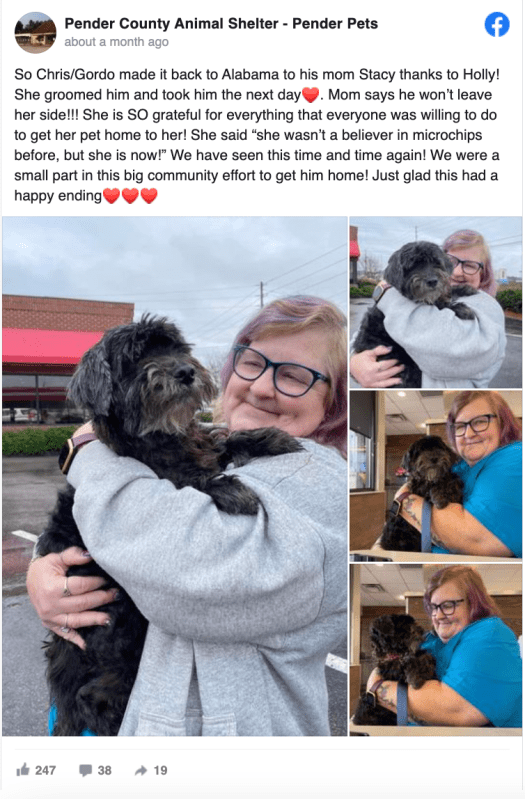 About a month later, in Pender County, N.C, a kind stranger named Holly Stahl had found Chris wandering all alone and took the initiative to take him to Pender County Animal Shelter to be scanned for a microchip. Once they discovered that he did have a chip, everyone involved was shocked at how far he had strayed from home.

The animal shelter had used Chris’s microchip to find Elam’s email address, but she couldn’t get to him. “I’m on disability, so (there) was no way I could get to North Carolina,” Elam told the newspaper.

However, the story doesn’t end at the animal shelter. Holly Stahl was willing to drive hundreds of miles and nine hours in total to get this curious black poodle mix back to his mom.

“I could not let them be separated any longer and made the drive to Alabama,” Stahl wrote on Facebook. “I’m blessed to have been able to help. It was absolutely heartwarming to reunite them!”

“When Holly arrived and Chris jumped into my arms, it was like we had never been apart. I was over the moon,” Elam told a newspaper.

If her story alone isn’t enough, she also encouraged all pet owners to get their pets microchipped. A microchip is a small, electronic chip enclosed in a glass cylinder that is about the same size as a grain of rice. When a lost dog is found and taken to a shelter or veterinary clinic, one of the first things they do is activate the chip with a scanner that is passed over the area. The chip transmits the identification number to the scanner. Throughout this process, the shelter or veterinary clinic can access the microchip registry which contains accurate information that they can use to quickly find the animal’s owner.