What’s So Bad About Plastic Bags? 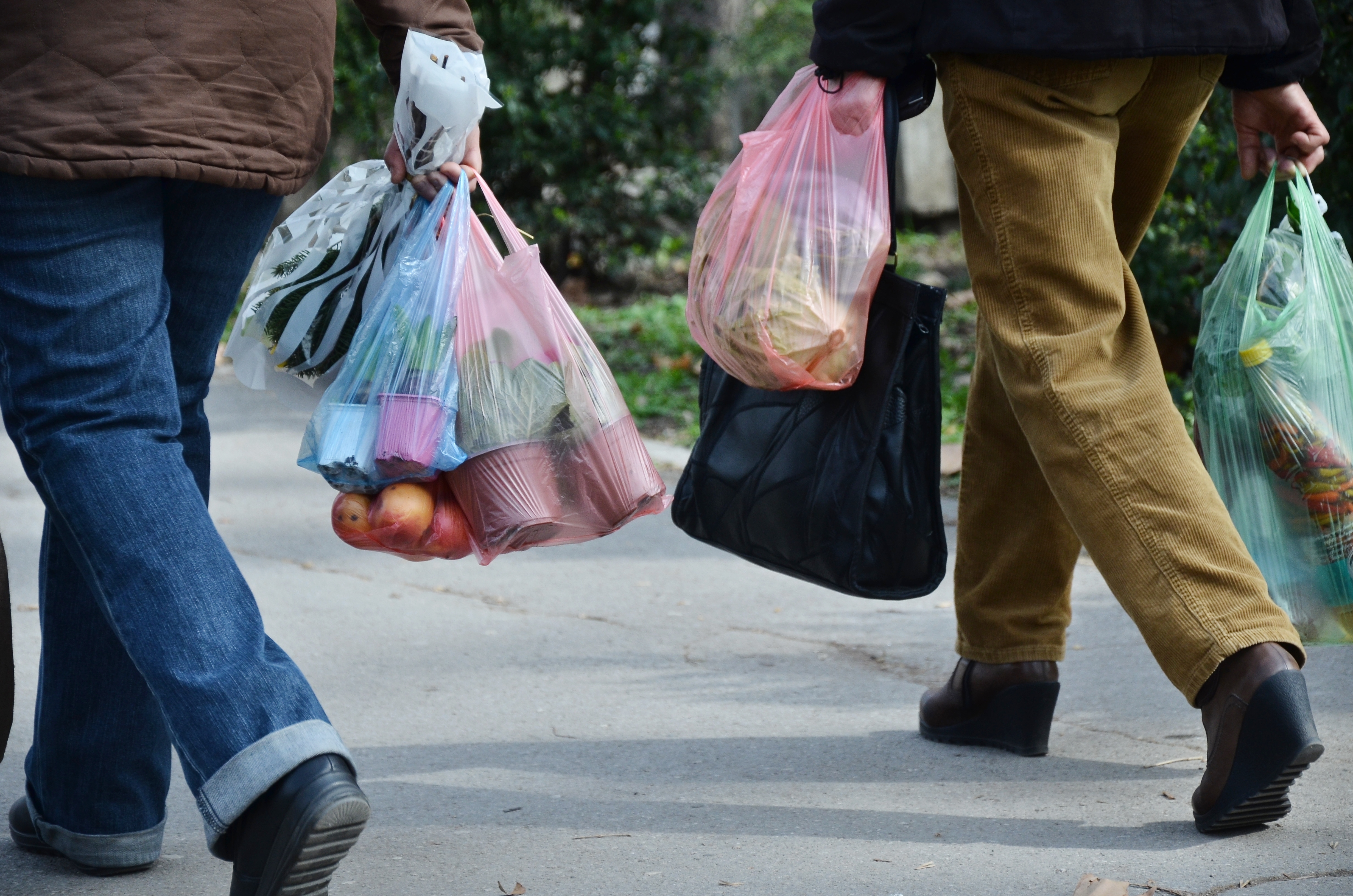 There’s no denying it. Single-use disposable plastic bags are suffocating the planet, with 60,000 plastic bags being consumed in the U.S. every 5 seconds. They are made using non-renewable resources, either petroleum or natural gas. They take huge amounts of energy to manufacture, transport across the country, and recycle. They don’t break down in landfill sites (due to lack of oxygen and light- nothing does), but over time they release dangerous chemicals. They’re incredibly difficult to recycle, causing problems such as blocking the sorting equipment used by most recycling facilities. They contribute to a widespread, global litter problem. And that’s not all.

On land, plastic bags are one of the most common types of litter worldwide. Build-ups of plastic bags are notorious for causing blockages of local drainage systems in developing countries. The floods in Bangladesh in 1988 and 1998, and frequent flooding in Manila can be attributed to blockages caused by this litter. Plastic bags also pose serious health hazards to populations as over time they leach toxic chemicals into drinking water supplies.

Plastic bags are hugely difficult to recycle. The common three-arrow recyclable symbol is found on plastic packaging across the U.S. however in many cases it is a marketing trick, as there is no regulation of the symbol or legal requirements for the way it is used, and every municipality in America has different guidelines on what it can and cannot recycle. Many of the plastic bags collected by recycling companies cannot be reused or recycled, as the industry that produces them does not want to buy them back. Most ‘recycled’ bags, therefore, end up in landfill sites or are shipped to Asia, where workers in sweatshop conditions cherry-pick our trash looking for plastics that can be melted down and reused there. Not only are these enterprises quagmires for human rights issues and labor issues, the toxic open-melting methods they use are also a major cause of concern for human health.

Midway Atoll in the North Pacific Ocean is home to the largest albatross colony in the world. These birds come to nest on the isolated Northwestern Hawaiian Islands, and they forage for hundreds of miles out to sea in search of food for their offspring. Swaths of these birds have been found dead by rescue workers on Midway due to ingesting substantial amounts of plastic bag remnants. All the plastic found in the birds on Midway Atoll is brought to the island by albatross parents who fed them to their young. An estimated 4 tons of plastic accumulates on the island every day.

Most of the Earth’s wildlife is in the sea, which means that at least 260 other species of animal are also at risk of ingestion or entanglement due to plastic bag flotsam. Floating plastic bags are often mistaken for jellyfish by marine animals who feed on them, such as sea turtles which are threatened with becoming endangered due to mass ingestion of plastics. Shards of plastic bags fester in their stomachs, leaving no room for actual food, and because the plastic cannot be digested, it remains in the sea long after the turtle has perished and decayed because of it. In August 2000 an autopsy of a beached whale’s stomach revealed 20 square feet of mostly single-use plastic shopping bags which took up its entire stomach. Similar cases have occurred with animals across the planet over the last 3 decades, since plastic bags were introduced on a mass scale.

In addition to this, as the plastic degrades into smaller pieces it is also eaten by aquatic organisms, small fish, and jellyfish. Plastic waste, therefore, enters the food chain in increasing concentrations as larger fish feed on smaller ones and other animals feed on the fish – including human beings.

The litter caused by plastic bag use it not limited to land. Plastic bags contribute heavily to the formation of a quagmire of plastic debris in the North Pacific Ocean, also known as the Great Pacific Garbage Patch, which is estimated to be twice the size of Hawaii or possibly even twice the size of the United States. According to the program director of Wild Studies Institute, Kristen Parke, since all drains lead to the ocean, 80% of all the debris found in the ocean starts from a land-based source.

Over a decade of investigation, it has been discovered that plastic bag use has contributed heavily to the Great Pacific Garbage Patch, which Anna Cummins, co-founder of 5 Gyres Institute, calls ‘a thin plastic soup.’

As well as this, a 2002-05 study of marine debris in southern Chile found that while specific types of marine debris were found in particular areas of the ocean, ‘Plastic bags, which could be from land- or sea-based sources, were found throughout the entire study area.’

Kamilo Beach in Hawaii is frequently buried in 2 feet of plastic that washes up from the sea, and there’s a running joke in New York, where a billion plastic bags are used per year, that the New York City flower is actually a plastic bag caught in a tree.

The plastics industry has launched major and influential campaigns against endeavors to reduce or ban plastic bag use across the U.S. The American Chemistry Council (ACC) is a representative body for a large group of companies including ExxonMobil, Chevron, Dow Chemical, and Shell. The ACC works hard to protect the plastic industry’s market share and profits, spending $8 million on lobbying alone last year. They argue strongly in favor of single-use plastic bags, with various advertising campaigns airing across on televisions in the U.S., they have attempted to sue individuals campaigning for plastic bag bans, and they even claim that paper bags cause more environmental problems than plastic.

The ACC has set up campaigns such as ‘Save the Plastic Bag’ and ‘progressive Bag Affiliates’, and their Plastic Bags Lobby has a significant influence on political decisions. They have successfully prevented fees on plastic bags from being introduced across America, for example in Seattle where they launched a huge signature campaign resulting in 47% of Seattleites voting for the fee on bags, and 53% voting against it. The ACC spent $1.4 million funding a campaign in Seattle to ‘educate’ people about the supposed ethics of plastic bags, claiming, amongst other things, that they create jobs and are widely and easily recycled. Lawmakers in California also rejected a people-led statewide ban across the state due to heavy lobbying initiatives and advertising campaigns in favor of plastic bags.

Speaking about the ACC, the Editor of The Plastic Free Times Amy Westervelt, states that ‘They will stop at nothing to suppress or discredit science that clearly links chemicals in plastic to negative impacts on human, animal and environmental health.’

However, according to the documentary Bag It, the paper bags now used by San Franciscans after a plastic bag ban was enforced there are recycled at least 10 times more than plastic bags were.

So Who’s Doing What?

Now for a look at the U.S. In recent years, over 200 communities across the States have introduced anti-bag measures. Due to a lack of governmental regulation of plastic bags, U.S. citizens are taking it upon themselves to eliminate the quagmire fodder. In 2007, San Francisco became the first American city to ban plastic bags in specific stores, and similar bans now exists in coastal North Carolina and Portland. By Earth Day 2008 Whole Foods Market had stopped using plastic bags across its stores completely. In 2010 Washington, D.C. imposed a plastic bag fee that instantly reduced plastic bag use from 22.5 million to 3 million per month. Meanwhile, 30 rural communities in Alaska have banned plastic bags, while more bans are due to take effect in Texas, Hawaii, American Samoa and Maui. In 2011 Chestertown, in Maryland, introduced a plastic bag ban. This year, Aspen, Colorado has banned grocers from handing out plastic bags and added a 20 cent fee to paper bags too. Other cities across the U.S. have legislature on plastic ban sales that will come into effect later this year.

What Can We Do About It?

As with most consumer issues, when it comes to plastic bag use the 4 environmental ‘R’s apply – where possible reduce, reuse, repair, and recycle your plastic waste. But with the scale of this issue and insufficient recycling measures, action is desperately required on an individual level. Think of the animals, the humans, and the planet that are being trashed by our plastic bag addiction. We need to trash the plastic. Here’s how you can help this happen.

Buy a fabric bag such as a cotton or jute bag. Onya bags are made from recycled parachutes and come with key fobs so you can take them with you wherever you go. If you get caught out, ask in store whether they can supply a box or crate to transport your shopping in. You can always keep boxes or crates in your car too, in case of an emergency.

Reuse and recycle – Keep plastic bags out of the bin

If you have a lot of them, thrift stores are often in need of clean plastic bags. If they are not intact you can always put them in your compost bin, and stick them back in whenever you dig out the compost to use in your garden. This way, although they probably won’t decompose in your lifetime, but at least they are kept out of sea turtles’ guts.

The quagmire is not getting any smaller, and it is virtually impossible to remove now. However, you can still help by taking part in voluntary beach clean ups of plastic debris which take place on beaches across the U.S. If you can’t find one year you, pick a needy coastline and organize your own. You will save countless needless deaths this way by reducing the animal and environmental impacts of plastic bag debris.

People need to know the truth about plastic bags. Buy natural, reusable bags for friends and family members for their birthdays and Christmases. Encourage local independent businesses to trash the plastic. Talk to your neighborhood about plastic bag litter and talk to your state governor about introducing a ban on plastic bags in the city or the state. Any small difference you make to halting plastic bag use will make a huge difference to the lives of countless species of animals across the world.