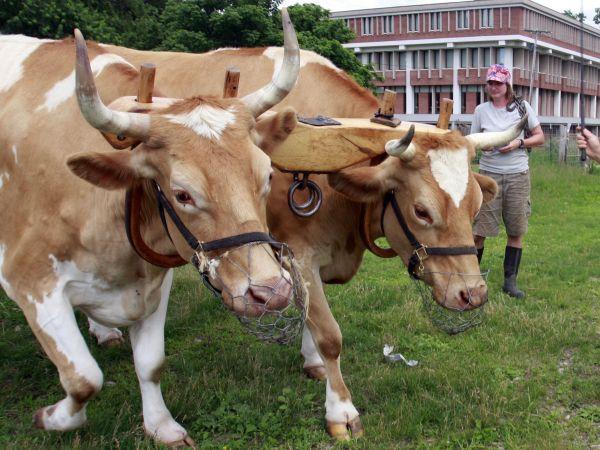 And, the biggest way we worsen climate change is by continuing to eat animals and animal products, which brings me to my next storm.

A storm fueled by outrage is sweeping across the country. People are speaking up to save Bill and Lou, oxen who toiled for years at Green Mountain College (GMC) in Vermont, and are now destined for slaughter to feed students as part of the college’s model for “sustainability” after Lou sustained an injury.

Destiny, however, was altered.

More than 47,000 people signed petitions to save Bill and Lou. Slaughterhouses came under pressure from animal rights groups and the media and refused to carry out the slaughter. As of now, Bill and Lou’s slaughter has been delayed.

There are many reasons to save Bill and Lou. They have served as workers and mascots for GMC…after all, no one would retire and reward aging loyal employees by slaughtering and eating them. That they are best friends and share a special relationship with those at GMC…we don’t kill our friends or family just because they become old and injured.

Beyond their immediate context, Bill and Lou offer a portal through which we can see what we would rather not see: our role in perpetuating cruelty. These two oxen represent the tens of billions of animals slaughtered globally every year. They remind us that we are assimilating their terror, anxiety, and karmic burden into our bodies. If we can save Bill and Lou, there is hope for saving all the other sentient beings in the world, including homo sapiens. It takes courage to face this reality and to act to change it; a courage I believe we all possess.

Bill and Lou highlight the destruction of the climate as well. For instance, we use 45% of global land for animal agriculture, with 51% of global greenhouse gas emissions coming from the livestock sector. As Peter Singer puts it: “We are, quite literally, gambling with the future of our planet – for the sake of hamburgers.”

Saving Bill and Lou is about redefining what life, liberty and the pursuit of happiness could mean. To preserve life, we must liberate animals and ourselves by decoupling our search for happiness from the mass destruction and consumption of sentient beings. Sailesh Rao, who heads the non-profit Climate Healers, has been working tirelessly to bring awareness to issues of meat-eating and its direct and enormous contribution to climate change. The day after Election Day, Sailesh begins a month-long road tour of the U.S. from his home in Phoenix, AZ, to raise more awareness about Bill and Lou, and call Americans to action.

These efforts are converging on a universal message: life, liberty and happiness for everyone is a goal that offers compassion, wellness, ethically and environmentally sound actions, and authentic relationships. So many wins!  Sustainability – defined as meeting our needs now without compromising the ability of future generations to meet their needs – can be achieved if we work together towards this goal.

Let’s make the next super storm one of compassion. Ask GMC to save Bill and Lou, and let that be a first step to saving ourselves.

What you can do:

Sign the Care2 petition to save Bill and Lou: https://www.thepetitionsite.com/843/838/964/spare-oxen-bill-and-lou-from-slaughter/