After 23 Years in a Lab, Scarlett the Chimp Now Enjoys a Life of Leisure and Freedom (PHOTOS)

Laboratory research on chimpanzees has been ongoing in the United States since the 1920s, making the U.S. the only developed country in the world that continues to use chimps in invasive research studies.

At research facilities, chimps may encounter any number of living arrangements, with some having access to an outdoor enclosure while others are kept isolated and confined to cages for the entirety of their lives. Despite a lab’s best enrichment and housing efforts, a laboratory environment can never substitute the world chimps would encounter if they ever had the opportunity to live in a natural, wild environment.

What’s more, being the highly intelligent and sentient creatures that they are, chimps involved in invasive studies have suffered immensely over the years.

According to the Humane Society of the United States (HSUS), chimps used in research “are often subjected to painful and distressing procedures, including liver biopsies, human virus infections, and frequent ‘knockdowns,’ in which a chimpanzee is shot with a tranquilizer gun.”

Moreover, chimps may develop health and psychological problems, such as “depression, heightened aggression, frustration and even self-mutilation,” as the HSUS reports.

Thankfully, with advances in medical technologies and a rising awareness about the plight of lab animals, chimp research has significantly decreased in recent years.

In June 2013, a major victory was achieved when the National Institutes of Health (NIH) announced that it will retire nearly all government-owned lab chimps to Chimp Haven, a sanctuary in Keithville, La. The NIH’s historic decision came two years after its 2011 report, which deemed chimps unnecessary for most biomedical research. Three hundred sixty chimpanzees are set to be surrendered to Chimp Haven by the end of 2014.

Chimpanzee research may soon be a thing of the past, however more pressure needs to be placed on our governing bodies as 850 chimps – many who are government-owned or government-supported — are still held captive in five U.S. laboratories.

The fate of captive chimps is in our hands and organizations, like Save the Chimps, are trying to change perceptions about these magnificent beings and garner support for their protection.

A sanctuary in Fort Pierce, Fla., Save the Chimps has rescued 294 chimpanzees with histories of biomedical research. Two hundred sixty six of these primates came from one of the country’s largest (and thankfully, now closed) research facilities, The Coulston Foundation.

It was here where now 34-year-old chimp Scarlett spent nearly two and a half decades of her life.

On Nov. 11, 1979, Scarlett was born into a life of research at the Coulston Foundation. Not long after her birth, she was snatched from her mother, Cherry, in order to be raised for testing purposes. 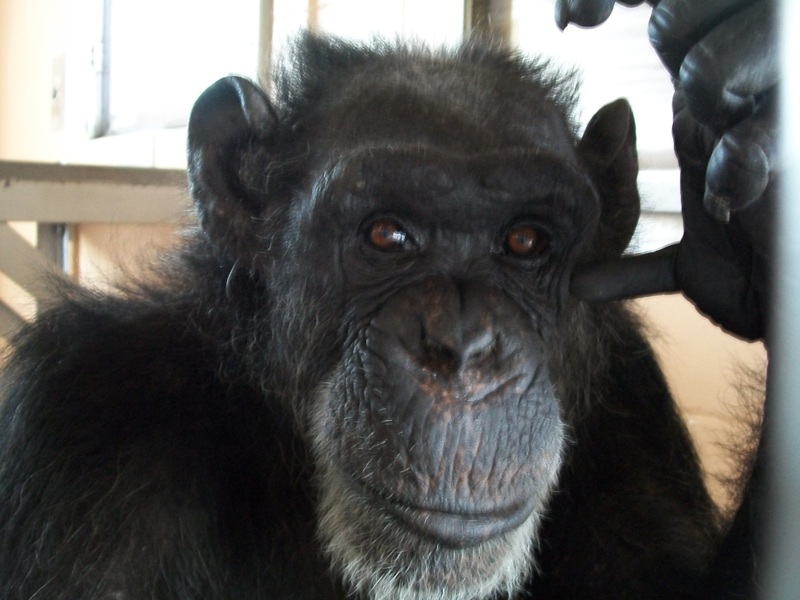 “Every month, she was anesthetized in order to take blood samples for research studies,” Save the Chimps reports. 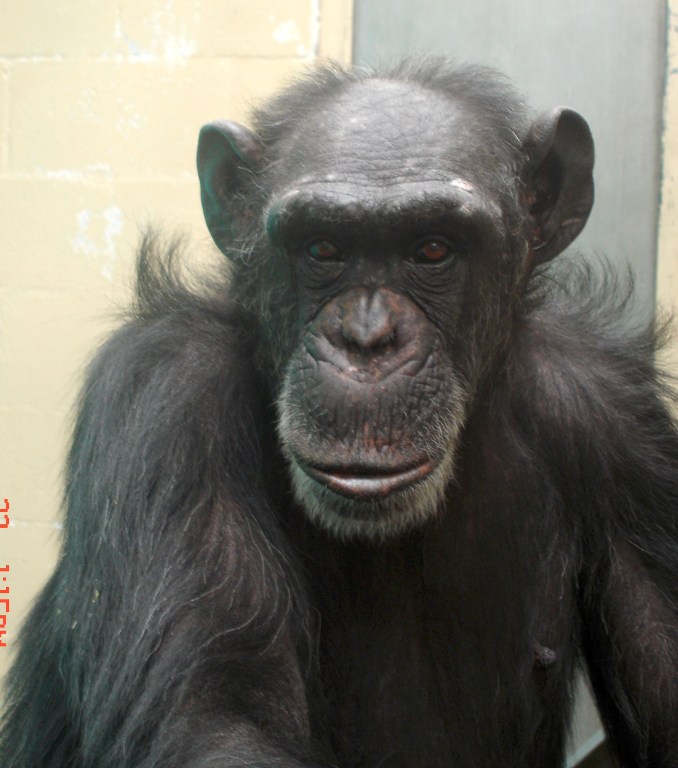 At just three years old, Scarlett was moved to another research lab, but returned to Coulston 13 years later to endure the same fate as her mother – a life of a breeding chimp. 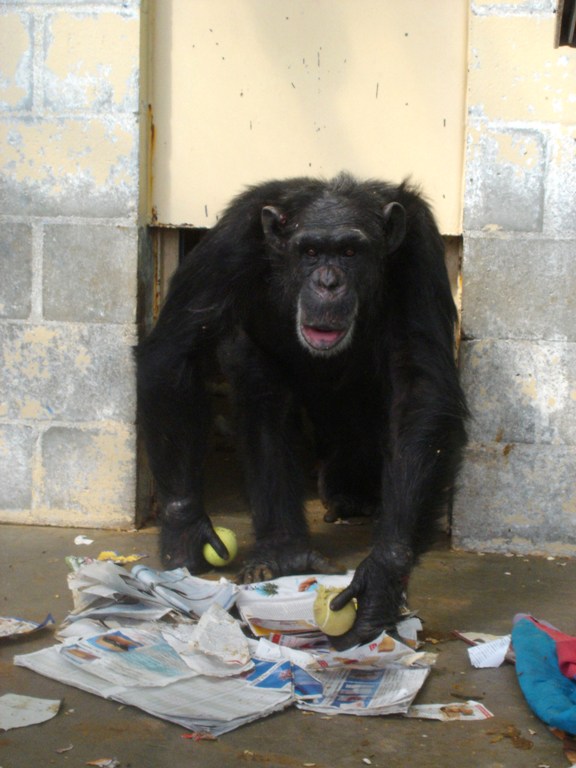 According to Save the Chimps, she “lived along in a small and barren cage in a building dubbed ‘the Dungeon.’” 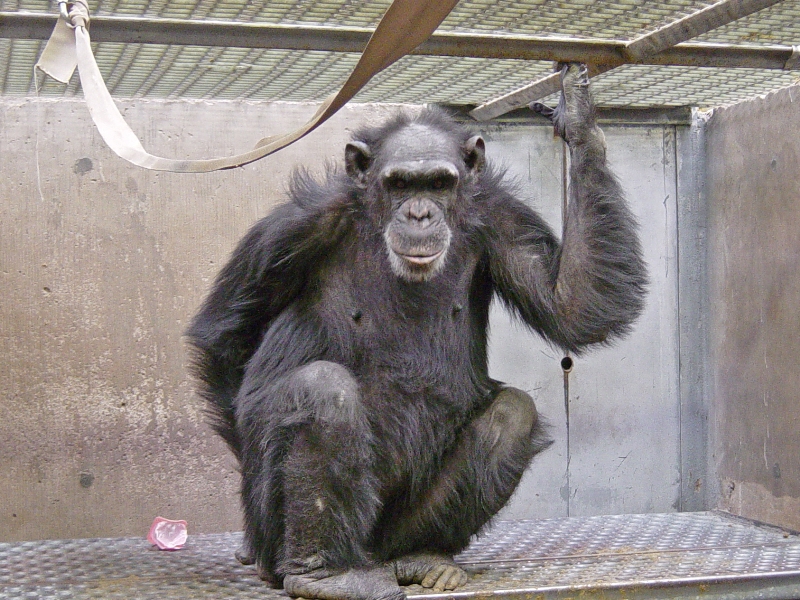 During her second tenure at the Coulston Foundation, Scarlett had two children named Jude and Joey. However, both babies were taken from her almost immediately, allowing her no time to soothe or care for the children she had spent months preparing for. 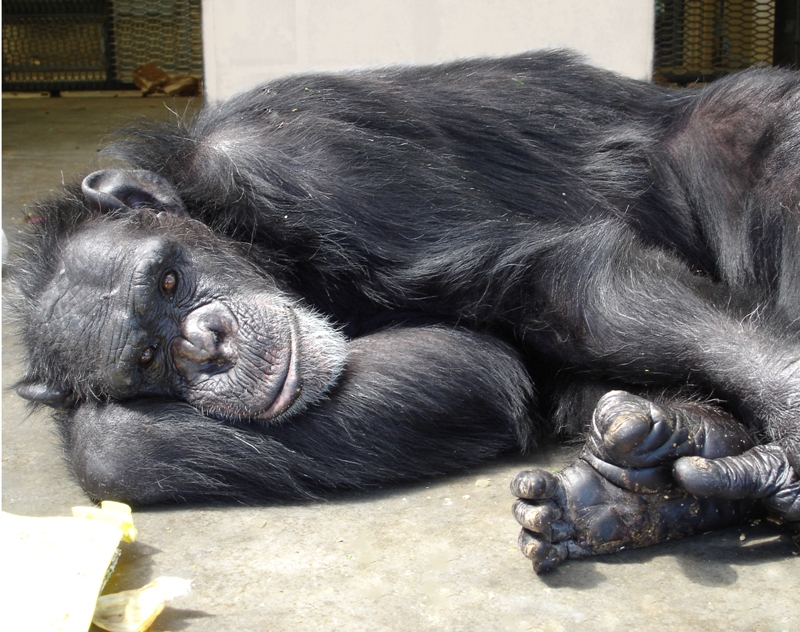 Unlike other chimps who suffered in labs until their deaths, Scarlett received the opportunity to be released when the Coulston Foundation closed its doors in 2002. Save the Chimps came right in for the rescue, but found her “depressed and withdrawn” and also learned that she has epilepsy. 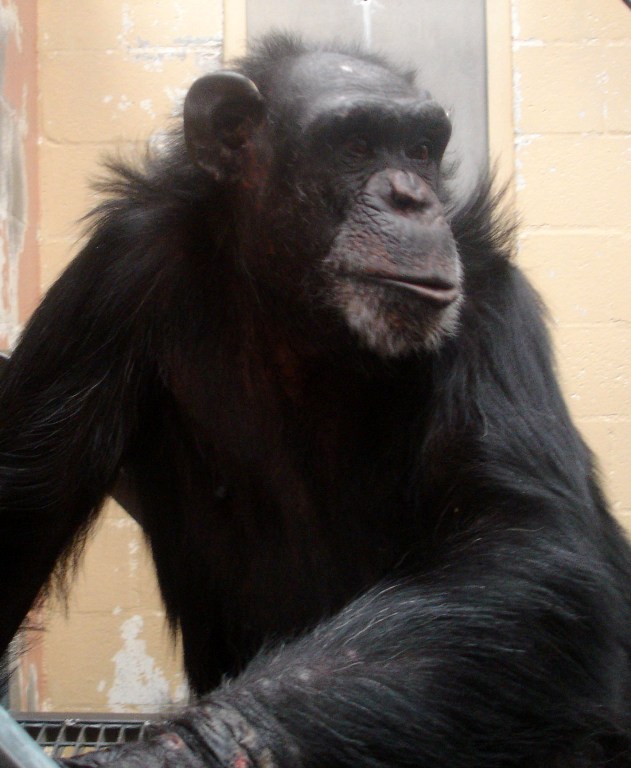 Thankfully, with the help of kind veterinarians and unconditional love and care from sanctuary staff, Scarlett has flourished, becoming a “a smart and confident chimpanzee, a grande dame, with a sense of humor,” Save the Chimps veterinarian Jocelyn Bezner tells OGP. 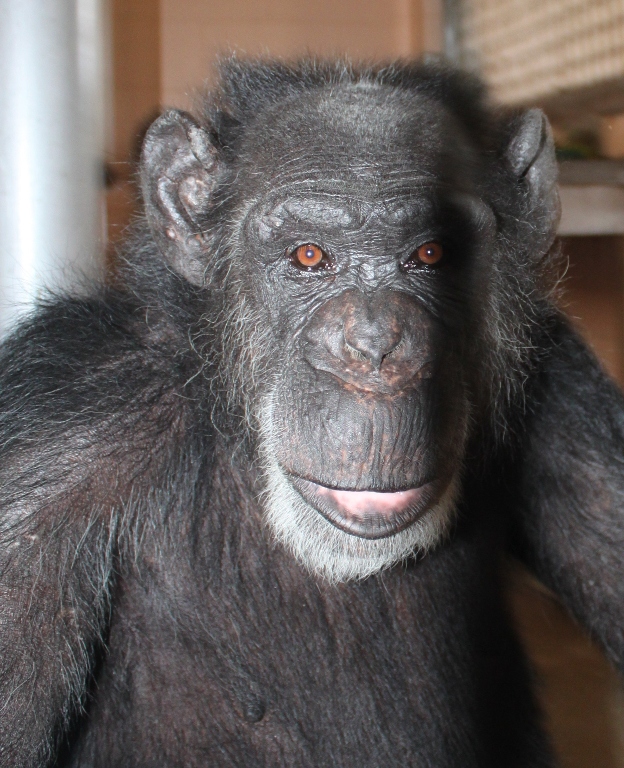 In 2008, Scarlett’s resilience was put to the test yet again when she “became temporarily paralyzed due to an unusual spinal injury … [which] may have been the result of a seizure,” Save the Chimps reports. 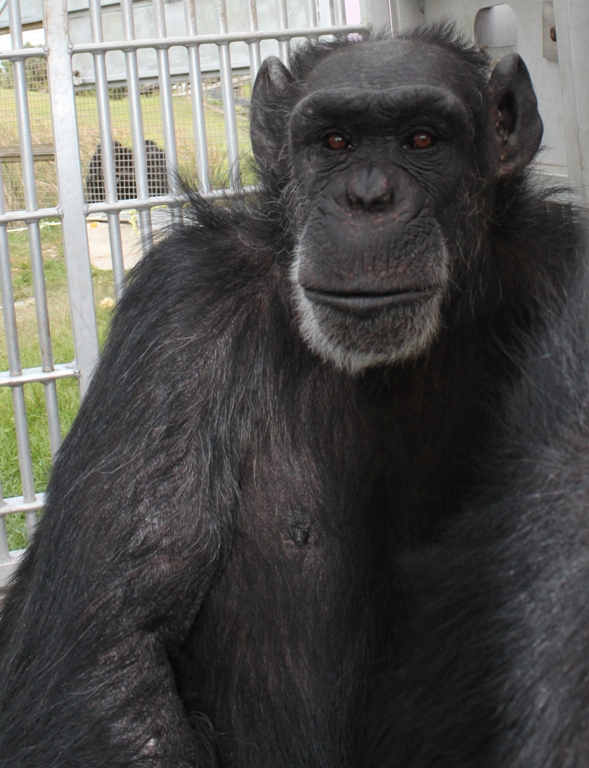 Scarlett again managed to pull through this great challenge, inspiring all with “her determination and spirit.” 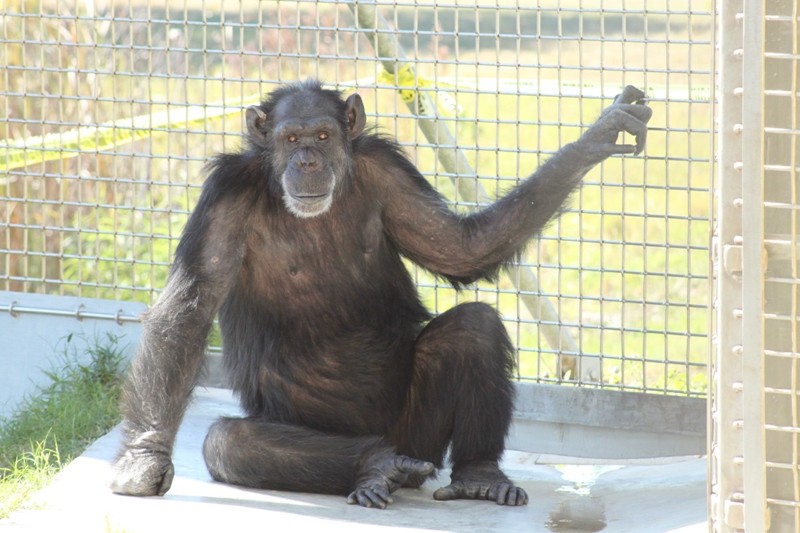 Since her temporarily paralysis, Scarlett has been enjoying a life of leisure in the Florida sun with the five chimps in her social group. Together, they share in the joys of freedom each and every day. 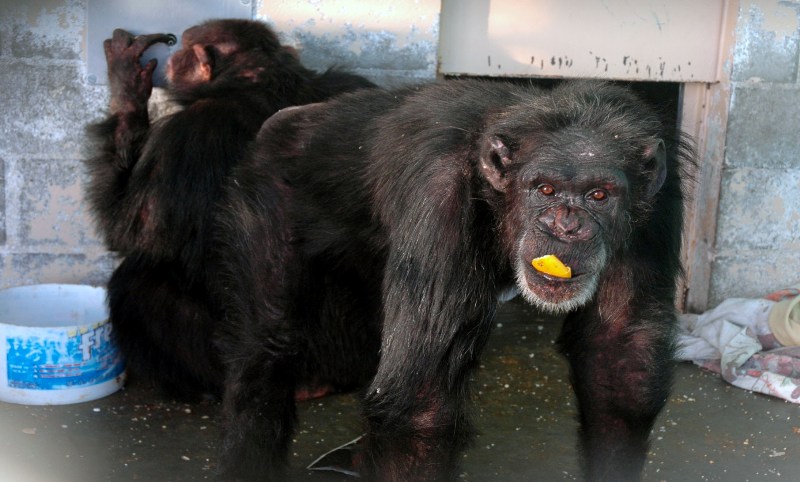 Check out a video of Scarlett’s rescue journey below!

To help former lab chimps like Scarlett, consider making a donation to Save the Chimps or symbolically adopting one of their residents (even Scarlett herself!).

Lead image source: Save the Chimps