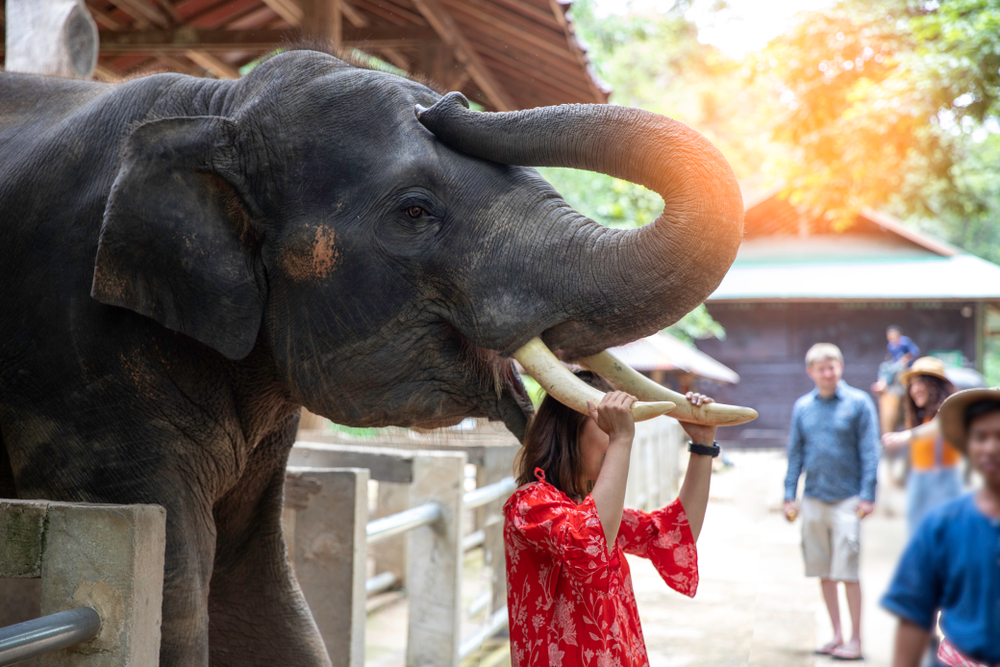 People on dating apps and site select their best photos for their profile page so they can impress those that might be a great match for them. But there is nothing impressive or attractive about animal cruelty! There is so much more to those selfies or luxury travel photos with captive animals than you might think. Elephants in the tourism industry give rides to humans because their souls were crushed with the cruel process known as phajaan and they are threatened with bullhooks into submission. Not only would elephants never do this in the wild, but they don’t even belong in captivity to begin with. Recently, elephants at a popular tourist site were found distressed and mistreated.

In captivity, elephants don’t get the exercise they need. They can’t roam for miles and miles with their herd, with whom they’d have close social bonds with in the wild. They can’t do things like bathe in the mud to protect themselves from the sun. Therefore, they begin to show psychological distress. Their physical health also begins to deteriorate.

Companies involved in the travel industry are beginning to realize the truth. UNESCO World Heritage Site, Angkor Wat recently banned elephant rides and relocated the elephants to a nearby forest. TripAdvisor made changes to their animal welfare policy and Booking.com stopped selling tickets to captive animal attractions. These sites were promoting and condoning animal captivity by allowing such things.

Instagram also set up a new system with alerts against animal abuse in tourist photos. Like Instagram, dating sites are another place where photos of captive animals are abundant. Tinder was urged by animal activists to ban photos with captive tigers, and they followed through. If pressured, they may do the same with photos of captive elephants and other dating sites like Bumble and OkCupid should follow suit. Sign this petition to urge them to take this step to protect animals and stand against wild animal captivity and cruelty by banning photos that show riding, “hugging,” or forced posing of captive elephants.