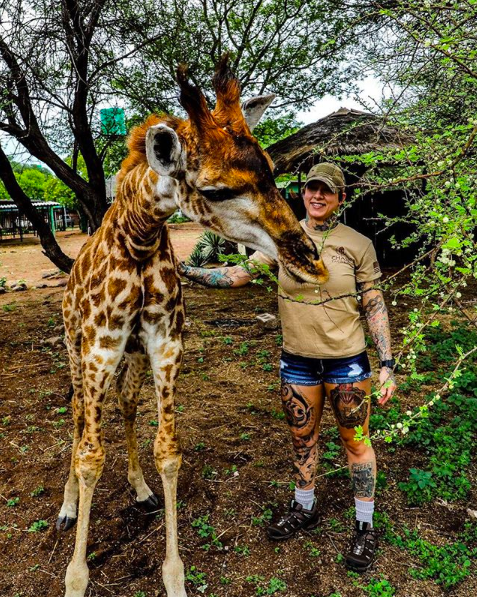 It might sound like the tagline of a Hollywood blockbuster: an army veteran who served in Afghanistan moves to Africa to defend endangered wildlife from poachers. But it’s the true story of Kinessa Johnson, a weapons instructor who uses tactical movement and hard-won experience to fight poaching and train the next generation of park rangers.

Originally from the State of Washington, Johnson works for the Veterans Empowered to Protect African Wildlife (VEPAW), who use their training and expertise to capture criminals trying to get rich by destroying wildlife. She joined VEPAW after spending four years in the armed forces as a weapons instructor and mechanic, including a tour in Afghanistan.

The organization was founded by a former Marine, and is comprised of veterans who joined the army in the wake of 9/11. Much as her life might sound like an action movie, Johnson insists she doesn’t go full Laura Croft on poachers, instead using strategic positioning to detain the offenders.

An animal lover in her own right, Kinessa’s passion for defending wildlife comes from a commitment to the creatures she protects and the people with who she serves. Johnson maintains a social media presence, sharing news about poaching, animal conservation, and two adorable pups of her own. She’s not shy about her opinions, especially her harsh words for anyone harming wildlife, legally or not. It’s led to backlash and slamming online, with insults and sexist comments about her service.

“I work with so many awesome and capable female park rangers here in Africa, who put their lives on the line every day right next to male park rangers,” she said in an interview, “I think these comments are also disrespectful to these amazing women.”

Last month, Johnson underwent neck surgery which took her out of the field, but if her Instagram is to be believed, she wants to return to Africa as soon as possible.

But Kinessa doesn’t let anything get to her, whether it’s poachers, neck injuries, or online trolls, she’s fully capable of rising to the challenge.  “If you are going to accept anything, accept who you are.” She said, in an Instagram post “Stand alone, be a wolf, a rebel, a warrior, a savage, a badass.”

Enjoy this story? Are you ready to fight for endangered animals like Kinessa? Check out Kim Kardashian, is That Dress Made of Snakeskin? For more Animal, Life, Vegan Food, Health, and Recipe content published daily, don’t forget to subscribe to the One Green Planet Newsletter!