See How Loving and Inseparable These Rescued Circus Lions Are

See How Loving and Inseparable These Rescued Circus Lions Are

Two years ago, Guatemala banned the use of wild animals in circuses. It’s a decision that animal activists across the world are fighting for in their own countries. But the landmark decision left lions in cages with no homes and nowhere to go. Since then, Animal Defenders International (ADI) has been doing everything they can to help get these animals a safe home at a sanctuary where they can spend the rest of their lives.

Just a month ago, we shared amazing footage of three of the tigers ADI rescued from Guatemala arriving at a sanctuary and enjoying life for the first time. Now, ADI has been kind enough to share with us another touching video, this time of two lions who share a very special bond. 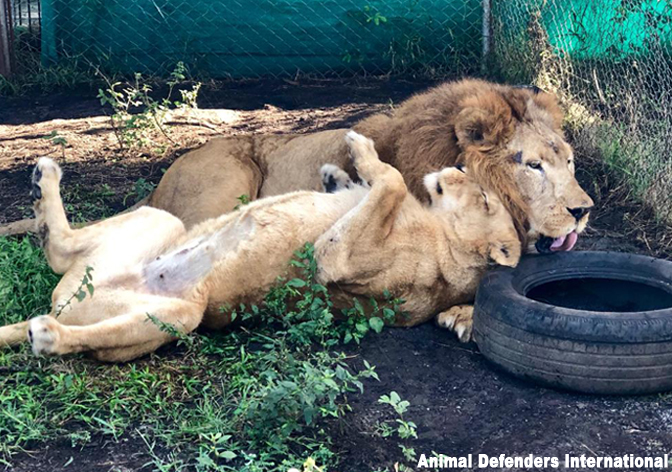 In the video above, Tarzan washes his partner Tanya as she lays there and enjoys the bath. It’s incredibly sweet and shows just how strong their connection is. ADI President Jan Creamer told One Green Planet, “It’s wonderful to see this loving lion couple so happy and carefree after the terrible suffering they endured while in the circus.” 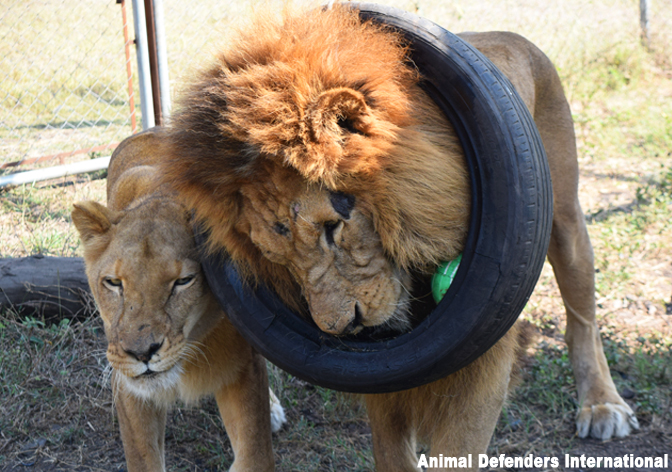 Tarzan is an 8-year-old African lion whose claws were removed while forced to work in the circus. When ADI rescued him, he had a torn lower lip from a fight with a tiger in the circus, as well as infected and broken teeth. After dental surgery, ADI was lucky enough to watch as he came out of his shell and showed them what a playful cat he can be. Tanya is a 9-year-old African lion who also had her claws removed. She protects and guards Tarzan like it’s her duty and in return, he grooms and cuddles her.

Here are Tarzan and Tanya’s first steps at the ADI Wildlife Sanctuary!

Check out this new footage of Tanya and Tarzan:

Tarzan and Tanya arrived at the ADI Wildlife Sanctuary (ADIWS) in South Africa as ADI concluded the Guatemala circus rescue. Giant Tarzan and his beloved protector, tiny Tanya, are enjoying life in their natural homeland and have turned their shared habitat into a love nest. If you’d like, you can donate to the care of the rescued lions or donate directly to the ADIWS. To stand up against circuses, sign this petition demanding a ban on the use of wild animals in circuses in the United States!