Couple Who Cruelly Tied Horse to a Pickup Truck and Dragged Him Charged With Animal Cruelty! 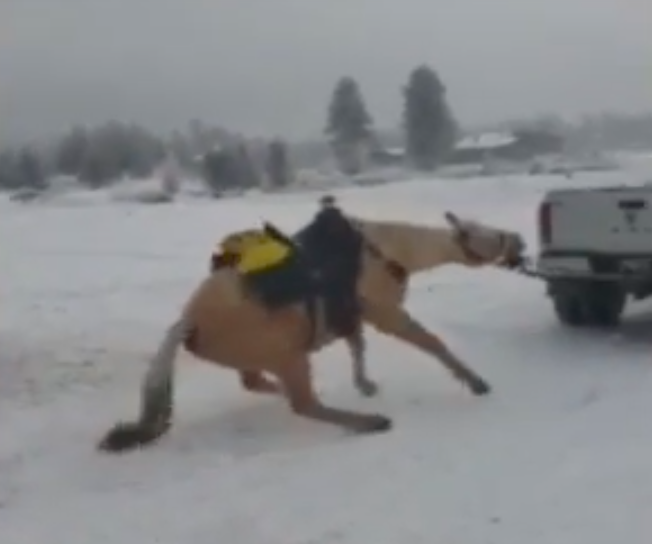 Recently, a video surfaced online of a white horse tied to a pickup truck being dragged through the snow. The cruel couple who recently acquired the horse said he gave his previous owners’ trouble. Whether that’s true or not, it does not excuse their behavior. The video is disturbing as the horse can clearly be seen resisting.

Warning: the video below may be distressing to some viewers. Please use discretion.

When the video was released, there was outrage across the country. CBS Denver said they were getting many calls and messages of people concerned for the horse and wondering about his wellbeing. The horse’s owner told CBS: “I’ve lost my job over this, I’ve upset a lot of people. I made our horse go through something that he shouldn’t have. I was wrong,” and “I’m very sorry. I get why people are upset. I was so stupid, I don’t know why we did it.”

In the video, the horse is pulled through at least one hundred feet of snow. It’s easy to apologize for something once you’ve been caught. They could be genuinely apologetic, but it’s hard to tell given that they saw how much outrage was sparked by the cruel video. Not to mention, as the video was gaining attention, the PACT Act, making animal cruelty a federal crime, was recently signed by Trump.

Fortunately, this case of animal cruelty won’t go ignored. When the video surface, Trigger was seized from the couple while an investigation was underway. They remained with their two other horses. However, since then, they have been arrested and charged with animal cruelty! Both people face a single count of animal cruelty and will appear in Grand County Court for an arraignment on January 28th.

If you want to help another horse in a similar situation as Trigger, sign this petition to help a horse who has been kept on a chain outside for seven years. Authorities have failed him, but you can speak up to see him saved and his owners faced with animal cruelty like the people who mistreated Trigger!