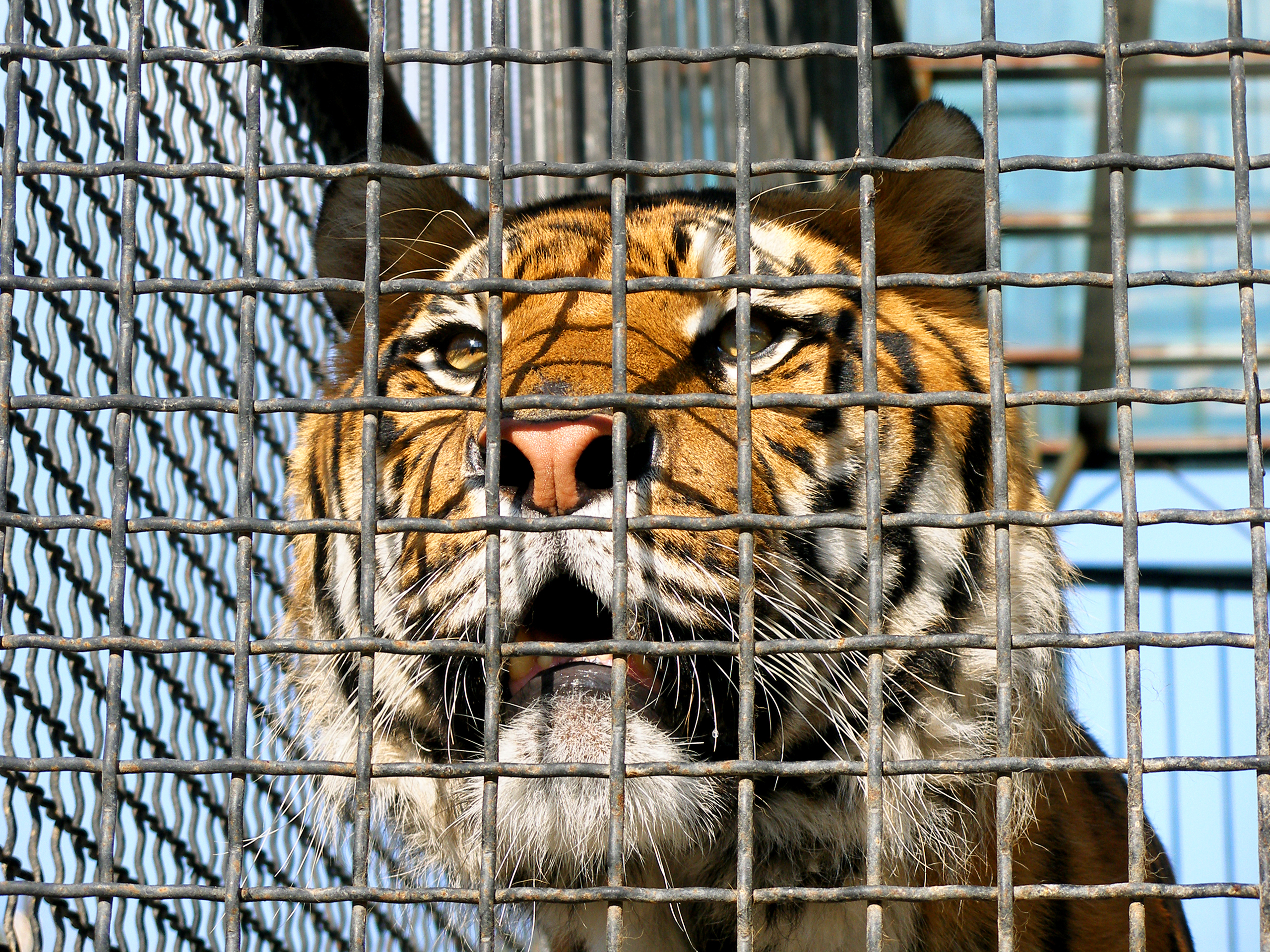 For over 60 years, federal legislation has been critical in the fight to protect animals from harm and abuse. Landmark bills like the Animal Welfare Act and the Preventing Animal Cruelty and Torture Act have been passed to protect dogs and cats. However, the U.S. lacks strong legislation related to wildlife and livestock who deserve just as much protection as our own pets.

Here are 8 impactful bills that need to be passed by Congress to help animals.

Amid the popularity of the Netflix documentary “Tiger King,” Senator Richard Blumenthal (D-CT) and Representatives Mike Quigley (D-IL) and Brian Fitzpatrick (R-PA) have reintroduced versions of the Big Cat Public Safety Act. The bill would prohibit the private ownership of big cats and make cub-petting illegal.

Nearly 5,000 big cats are currently kept in captivity around the U.S. Big cats in private ownership are subject to confined and unsanitary conditions, malnutrition, neglect, and abuse. Untrained owners not only harm the animals but their mismanagement can threaten public safety.

The bill also addresses cub-petting exhibitions where facilities charge customers for activities like bottle feeding tiger cubs. These cubs are often taken from their mothers at an early age and given drugs without the supervision of a veterinarian, which can lead to future health issues.

The Safe Line Speeds in COVID-19 Act would prohibit slaughterhouses from operating at dangerously high speeds that prevent social distancing during the COVID-19 pandemic.

Meat processing plants have been operating at dangerous speeds for years, leading to severe injury, illness, and even death. During the COVID-19 pandemic, the meat industry has further endangered worker safety and security by increasing line speeds, making it harder for workers to follow proper social distancing procedures.

“Since mid-March, outbreaks of COVID-19 have continued to surge in meatpacking plants across the country, infecting tens of thousands of workers and tragically killing more than 168. The majority of these workers are from immigrant communities and communities of color,” said Senator Booker (D-NJ). “The situation has only worsened since the USDA has approved nearly 20 requests from meatpacking plants to exceed regulatory limits on line speeds despite the risks posed to workers, consumers, and animal welfare.”

A companion bill was introduced in the House by Representatives Marcia Fudge (D-OH), Rosa DeLauro (D-CT), and Bennie Thompson (D-MS).

“Cosmetics testing on animals is painful and cruel, the practice is obsolete, and Congress should end it,” said Rep. Beyer. “The cosmetics industry already has safer, better testing methods that do not harm animals, so passing this bill would show moral leadership without detriment to American businesses.”

Although Congress has tried for years to address cosmetic animal testing, this year’s Humane Cosmetics Act comes with unprecedented support from animal welfare groups along with the cosmetics industry itself. The Humane Society Legislative Fund and Humane Society of the United States worked with the Personal Care Products Council, the leading national trade association representing cosmetic and personal care products companies, to propose language for the bill in both its House and Senate versions.

The Captive Primate Safety Act would amend the Lacey Act Amendments of 1981 to prohibit any interstate or foreign commerce involving monkeys, chimpanzees, and other nonhuman primates for the cruel pet trade, including the sale, transportation, and acquisition.

The bill would require facilities regulated by the Animal Welfare Act—such as commercial animal breeders, zoos, and research institutions—to create detailed response plans to protect animals during disasters and ensure that employees know the steps to take when an emergency occurs.

After Hurricane Katerina, approximately 8,000 animals, including dogs and monkeys, died at a medical school in New Orleans. Without a federal requirement for disaster planning, the responsibility to save animals falls on emergency first responders and non-governmental agencies like the ASPCA.

Urge members of Congress to support the PREPARED Act!

More than 9 billion land animals are killed for food each year and 99% of all animal products in the U.S. come from factory farms. The Farm System Reform Act is one large step in ending the cruel, dangerous, and inhumane practices by prohibiting the creation or expansion of large factory farms and phase out the largest factory farms by 2040.

“We need to fix the broken system – that means protecting family farmers and ranchers and holding corporate integrators responsible for the harm they are causing,” said Sen. Booker. “Large factory farms are harmful to rural communities, public health, and the environment and we must immediately begin to transition to a more sustainable and humane system.”

The Endangered Species Act, the gold standard of conservation legislation, is being undermined by the Trump administration. New regulations threaten the nation’s most effective way to prevent species extinction.

The restored rules include giving threatened species the same protections as endangered species, prohibit economic assessments from being considered in listing decisions; and revising the criteria used for setting aside critical habitats for species recovery.

“We are in the middle of an extinction crisis, and President Trump is bulldozing the most important tool we have to protect endangered species,” said Rep. Grijalva, Chair of the House Committee on Natural Resources. “If we want to protect species close to extinction, Congress has no choice but to act. Trump’s changes are handouts to special interests that want to keep lining their pockets regardless of the consequences. If we don’t stop the Trump administration’s short-sighted rollbacks, more wildlife habitats will be sacrificed to oil and gas development.”

Tell members of Congress to sign on the PAW and FIN Conservation Act!

Sponsored by Senator Robert Menendez (D-NJ) and Representative Janice D. Schakowsky (D-IL), this bill would permanently ban horse slaughter in the U.S. as well as prohibit the export of horses abroad for slaughter.

The horse slaughter industry is extremely cruel and abusive. Horses are crammed into trailers causing many of the horses to injure and trample over each other. Horses are pumped full of dangerous substances that are banned by the FDA before getting shot in the head with a captive bolt gun.

“The SAFE Act is vital for the health of consumers and wellbeing of horses,” stated Rep. Schakowsky during a House subcommittee meeting. “Many of the substances used to treat horses are banned by the FDA, making horse meat dangerous for human consumption. As a lifelong advocate for consumer protection and animal welfare, I welcome the focus on this legislation.”

With widespread bipartisan support, alongside the push from animal activist groups, such as the Humane Society of the United States and the Animal Legal Defense Fund, this could be the year to finally pass the SAFE Act.

Tell members of Congress to end the horse slaughter industry.

The enforcement of previous laws has been inconsistent or inadequate, allowing inhumane practices to continue without consequence. New bills are necessary to fill the gaps in coverage and enforcement. While federal laws are important and necessary, most animal protection laws are enacted and enforced at the state and local level. Check out current state laws to help animals.

Read about the six groundbreaking laws that have been passed to protect animals.