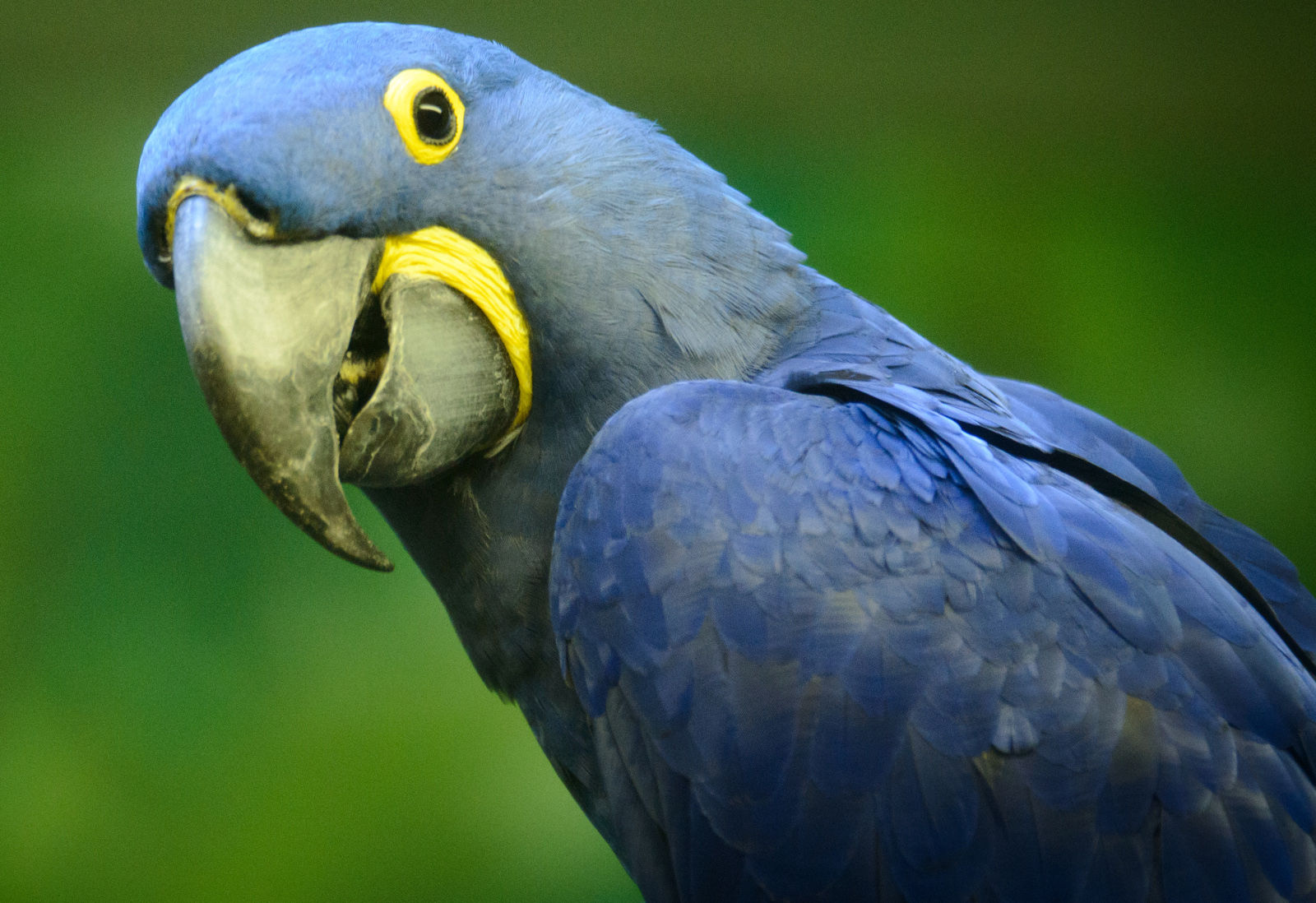 Here’s a little-known fact about January, Green Monsters: it’s Adopt A Rescued Bird Month! This month was originally established by the American Society for the Prevention of Cruelty to Animals (ASPCA) to draw attention to the plight of thousands of companion birds – including parrots, parakeets, and canaries – who are abandoned each year. According to Animal Central, “Bird ownership requires dedication that often surpasses that of dog or cat ownership. Some birds can live to be 60 – 80 years old and are a great commitment by their human companions.”

Unsurprisingly, people who purchase unusual birds purely for the novelty factor of it, lured in by the tricks of the international trade in exotic and often endangered birds, do not have the dedication and commitment required, and frequently abandon their feathered companions. To mark this month, check out the list below with seven facts you might not know about the exotic bird trade.

1. Nearly one third of all parrot species worldwide are close to extinction because of the exotic bird trade.

Let’s start off with the most alarming fact of all: according to the Animal Welfare Institute (AWI), one third of the world’s parrot species are at risk of dying out because of habitat loss and the demands of the pet trade – two threats which frequently go hand-in-hand. The orange-bellied parrot, in particular, is teetering on the brink of extinction. Luckily, though, some parrot breeds such as the Lear’s macaw, a native of the Bahia region of Brazil, have made a comeback from this devastation in recent years. This species was downgraded from “critically endangered” to “endangered” by the IUCN in 2009, and thanks to intensive conservation initiatives in Brazil, its numbers have now grown from 455 individuals in 2003 to 960 today.

2. The process of capturing birds for the trade involves horrific cruelty.

The Consumers’ Association of Penang, Malaysia – a country where exotic and endangered birds are popularly chosen as pets – says that these creatures are caught in a variety of barbarous and inhumane ways. The practice of “liming,” for example, involves coating a branch with a sticky substance and waiting for a bird to perch on it. Mist nets, meanwhile, which are often spread across the flight paths of exotic birds, are often left hanging for prolonged periods of time, resulting in “slow agonizing deaths” for the animals who are captured by them.

3. In 1992, the Wild–Caught Bird Act banned the transport of exotic and endangered Bird species into the U.S.

Until 1992, there was no legal restriction on the amount or type of birds that could be imported into the United States of America. As a result, around 800,000 captive birds were brought into the country each year to be sold as pets, according to the AWI – and this number does not take into account the birds who died during the capture and transport processes. The Wild–Caught Bird Act (WBCA), introduced on Oct. 23, 1992, changed all of that by placing a complete embargo on the import of all exotic or endangered feathered species into the U.S., except under tightly regulated circumstances.

Sadly, the WBCA did not bring about the end of the U.S. exotic bird industry. The AWI says that while this Act “curtailed the flow of wild-caught birds into the U.S. pet trade … Domestic bird breeders accelerated their operations to meet the continuing demand, with some parrot species garnering thousands of dollars each.”

5. The conditions in which these birds are kept rivals the squalor of the infamous ‘puppy mills.’

Industrialized bird breeding facilities in the U.S. have been known to house large numbers of birds in rows upon rows of barren cages, depriving them of any meaningful social interaction. In May 2012, one such facility called “Wings Over the Rainbow” in Greater Dayton, Va. – masquerading as a “parrot sanctuary” – was shut down by police, with the help of the Humane Society of the United States. According to the HSUS, over one hundred exotic and endangered birds were imprisoned in this “sanctuary,” and many were suffering from “malnutrition, dehydration, mental distress, and zoonotic diseases.” This grim scenario is replicated in bird breeding facilities all over the world.

In October 2005, the European Union instituted a temporary ban on the importation of all wild-caught exotic birds, because of fears around avian flu. Until that point, the EU had been the world’s largest importer of exotic birds. The ban was made permanent in 2007. According to “Wild Pets in the European Union,” a 2012 report by wildlife conservation group Born Free, this permanent ban has prevented the capture and importation of up to two million exotic and endangered birds per year – though the problem of occasional illegal smuggling remains.

7. The idea of the “domesticated” parrot is a myth.

Many parrots offered for sale by the exotic pet trade are advertised as fully “domesticated,” but the AWI states that this idea is nothing but a myth. Even when bred in captivity, parrots retain all of their wild needs and instincts – and these instincts do not include performing for the sake of human entertainment, or saying inane things such as “pretty Polly.”

When they are found not to be as amusing as their new owners hoped they would be, many of these unwanted parrots are “set free,” only to be faced by hostile weather conditions and the twin threats of starvation and predation. Other parrots, who are not abandoned, often languish in their cages for many years and receive scant attention from guardians who have deemed them to be “boring” … a truly tragic fate for these intelligent and sociable animals.