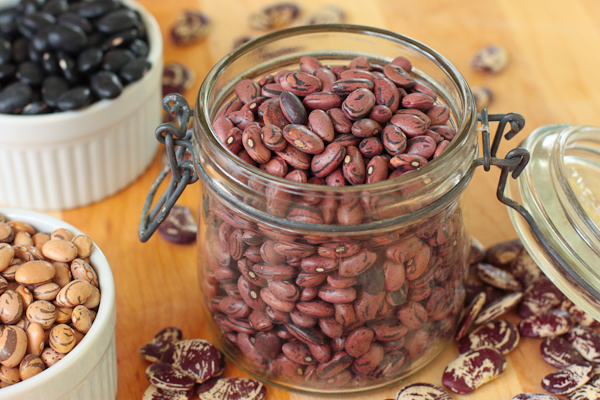 I recently conducted a very unscientific survey. The audience was comprised of a sample of well-educated adults in a major metropolitan area (aka about a dozen of my colleagues at work.)  The subject?  Beans.

Here are some of the questions I asked, and the responses:

How often do they eat beans? Average answer: once a week.

Do they cook dried beans? No, only canned.

What type of beans do they eat? Kidney beans and black beans, followed by chickpeas and canned baked beans.

Have they ever heard of heirloom beans? Nope.

Those results suggest one conclusion: many Americans are missing out on an amazing world of beans!

Of course, our country hasn’t always been so bean-deprived. The colonists learned to cook beans from Native Americans, and baked beans became one of the most popular dishes of the New England region. During the Great Depression, when meat was out of reach of many Americans, beans were promoted as an inexpensive source of protein, and consumption was high. But as Steve Sando, founder and owner of heirloom bean producer Rancho Gordo explains, “we never had a bean culture at all … or we lost it. After the Depression we were quick to lose the habit.”

Today, beans are eaten more frequently in certain parts of the U.S., such as the Southwest. But overall, they are a much more integral part of daily life in many other countries. In Mexico, beans are a major staple, and hundreds of varieties are grown. In Egypt, fava beans are eaten every day, by rich and poor alike. And who could imagine Tuscany without the ubiquitous cannellini bean?

It’s unfortunate that beans don’t have a more honored place at our table. They are one of the most nutritionally complete sources of protein available – and diets high in fiber-rich beans have even been proven to help lower cholesterol.

But nutrition isn’t the only reason to expand your bean repertoire. Dried beans cooked from scratch are simply more delicious than canned beans. And heirloom bean varieties, cultivated over thousands of years and genetically untouched, have incredible textures, hues and flavors.

If you haven’t yet tried cooking heirlooms at home, here are a few of the many intriguing varieties you can explore. Their names, by the way, are not made up by some creative bean marketing executive – they are all traditional!

Christmas Lima Beans: Nothing at all like the green lima beans you’re probably used to, these huge maroon speckled beans are earthy and taste a lot like chestnuts. Try them in a stew with mushrooms.

Yellow Indian Woman: Remarkably creamy, these small golden beans are mild and versatile. They are wonderful in a simple soup.

Tongues of Fire: Ivory with burgundy “flame” markings, these beans are popular in Italy. Substitute them for other beans in a vegan Pasta e Fagioli.

Good Mother Stallard: Dense, plump and meaty, these beans are perfect cooked up simply with onions, garlic and olive oil.

Snowcap: Large two-toned bean similar to cranberry beans, but with a nice earthy flavor all their own. Try them in a white bean salad with fresh herbs.

If you’re only used to canned beans, or dried ones that may have been warehoused for years before reaching the supermarket shelves, you’re in for a treat. And keep in mind, you don’t need to make complex recipes to enjoy heirloom beans. In fact, despite the fact that Sando wrote a bean cookbook, he says “the best way to eat beans is just plain, maybe with some raw onion and a squeeze of lime. If they’re heirlooms, they don’t need much help.”

To dive into beans, start by buying and cooking some dried heirlooms, available in stores such as Whole Foods, or online from the sources below. And if you have a garden, get your hands on some rare seeds and grow your own!

Native Seeds /SEARCH This remarkable nonprofit organization dedicated to promoting and preserving ancient crops, will sell you seeds to grow your own. Or you can buy dried heirlooms including Four Corners Gold and Moon Beans.

Seed Savers Exchange Another great source of heirloom seeds, as well as dried beans. If you’re looking for “Lina Sisco’s Bird Egg” beans, this might be the only place to find them.