Genetically modified organisms conjure up notions of crops with increased nutritional value, longer shelf lives, or more robust growth.  While it might be true that there are a few of these products in the works, the majority of GMO research and production revolves around the use of herbicides and insecticides.

Herbicide tolerant crops are the most widespread of GMOs.  These crops have been genetically manipulated to withstand the spraying of the weed killers RoundUp or Liberty.  These are broad spectrum herbicides that kill all green plants, not just a specific weed, so when farmers who use herbicide tolerant crops spray their fields, only the GM crops survive.    The most widely used herbicide tolerant crop is Monsanto’s Roundup Ready soybean, but there are corn, sugar beet, and canola varieties on the market as well.  Companies that make these seeds say that they are beneficial because they allow farmers to spray less herbicide on their crops.  However, it has been shown that the use of these GMOs leads to an overuse of herbicides and creates strains of superweeds (weeds that cannot be killed by the herbicides).

Pest resistant crops, also known as Bt crops, contain genes that make them toxic to specific insects.   It is estimated that 40% of GM corn grown in the United States is Bt corn, a lot of which goes towards biofuel production and animal feed.  The other Bt crop widely grown in the U.S. is cotton.  Unlike insecticides that are sprayed onto plants, these insecticides are part of the organism and cannot be washed off, causing them to be ingested along with the Bt crop.  Similar to the problems with herbicide tolerant crops, Bt crops have also led to insecticide-resistant pests.

While the corporations who make these crops claim that the toxins inserted into these GMOs cannot pass through our digestive systems into our bodies, research seems to question this assumption.  A Chinese study found that the genetic material of the foods we eat are able pass through our guts and interact with our own genetic material, and a small Canadian study claims that the Bt gene was found in the bloodstreams of women and fetuses.  While more studies need to be done on this topic, this research suggests that these genes may not be as innocuous as once thought.  Avoid the consumption of genetically modified organisms by enjoying these 10 GMO-free alternative dairy products. 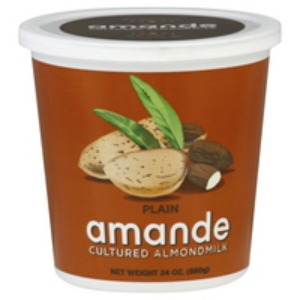 Amande is a vegan almond yogurt, making it a great alternative to dairy or soy yogurts.  This yogurt has no artificial ingredients or preservatives, is sweetened with fruit juice, and contains six live active cultures.  Their GMO-free yogurt flavors include plain, blueberry, cherry, coconut, peach, raspberry, strawberry, and vanilla.