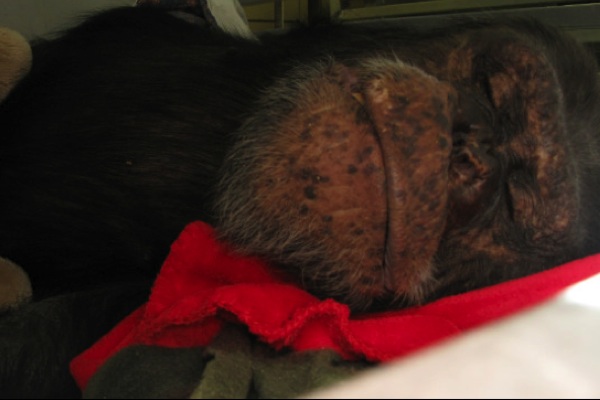 In 2002, federal authorities learned of severe mistreatment of 265 chimpanzees at the Coulston Foundation’s medical facility in Alamogordo, New Mexico. When the the facility lost funding and went bankrupt, a team of animal welfare experts stepped in to help the chimpanzees.

With the help of a $3.7 million grant, the Save the Chimps organization purchased the facility and began converting it into a temporary sanctuary for the animals until they could create a permanent outdoor sanctuary in Florida.

But first, the chimps, most of whom had lived their lives in isolation, needed to learn to live in family units.

Save the Chimps sanctuary director Jennifer Feuerstein was quoted: “The ultimate goal was forming family groups of 20 to 25 chimpanzees. We did it by introducing one chimpanzee at a time, so we’re talking over the past 10 years, thousands and thousands of introductions.”

As families formed, volunteers would migrate the group to the permanent sanctuary in Florida. Eleven groups were formed and migrated over a period of six years, with large-scale migrations beginning in 2005.

Recently, the last group of 10 chimps was migrated from New Mexico to their new, permanent home – 150 acres of former orange groves transformed into islands. The islands keep the chimpanzees contained without the need for fencing.

Their arrival in Florida marks the first time these chimpanzees have ever lived outside. Their first brush with grass, with sunlight, and nature.

Despite its tragic beginning, this story most certainly has a happy ending. Check out the video below to see the chimps on moving day!