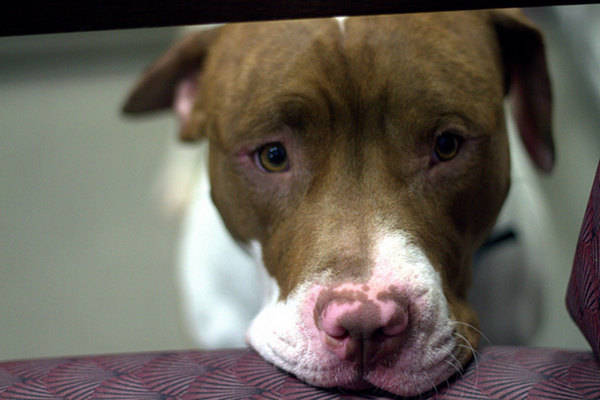 Pit bulls get a bad rap, and are often the dogs the media likes to spotlight in “dangerous dog” stories. However, Kilo, a 12 year-old pit bull, recently proved everyone wrong. This loyal, and faithful companion not only saved his owner’s life, but also took a bullet to the head…and survived!

On Saturday, March 31, Justin Becker received a knock at his door. When he opened it, he found what he thought to be a delivery man, who turned out to be a thief in disguise.  When the man pulled out a gun , Becker quickly realized the severity of the situation. He did not have much time to react, or protect himself from the robber. Luckily, Kilo was there to protect him.  Petside.com reports that Kilo charged the thief, getting between Becker and harms way.  The robber shot Kilo in the head, then ran.  Luckily the bullet grazed his skull, but did not penetrate the bone.

Becker and his girlfriend feared the worst, but refused to give up hope.  Kilo was rushed to an emergency vet, and after more than $2,000 spent in vet bills, Kilo is back home with his family, recovering.  He is now wearing a stylish cone, and dealing with some swelling, but there is no doubt that Kilo is one lucky dog.

This is an uplifting tale, that just goes to show that you can’t judge a book by its cover, or a dog by its breed for that matter.  Hopefully with a story like this being covered by the media, more people will open their hearts to this misunderstood breed.  Thanks to Kilo, it just may happen.