Dhruv Boruah, a cyclist and environmentalist from London, found a way to make his bike trips much more than a fun pastime or good workout. He combined two of his passions and found himself riding his bike on … the city’s canals. Boruah decided to learn how to make his bike float on the surface so that he could ride it on the waterways and collect plastic trash – and the results of his  “Thames Project” are inspiring in every way.

Boruah felt compelled to take immediate action against plastic waste after racing a yacht across the ocean from London to Rio de Janeiro, Green Matters reports. He learned that another team had come across two turtles entangled in plastic in the middle of the Atlantic Ocean. Boruah started thinking about what he could do at home to stop the plastic waste he sees in the waterways from traveling all the way to the ocean. Soon, he quit his job as a consultant and devoted himself to advocacy and clean-up efforts.

The environmentalist built a bamboo bicycle and attached yellow floats on either side, as well as a rudder and a pedal-powered propeller at the front. He also added a fishing net by hooking it on both sides of the bike – as he cycles on the rivers, the net does the job of collecting plastic waste from the water. 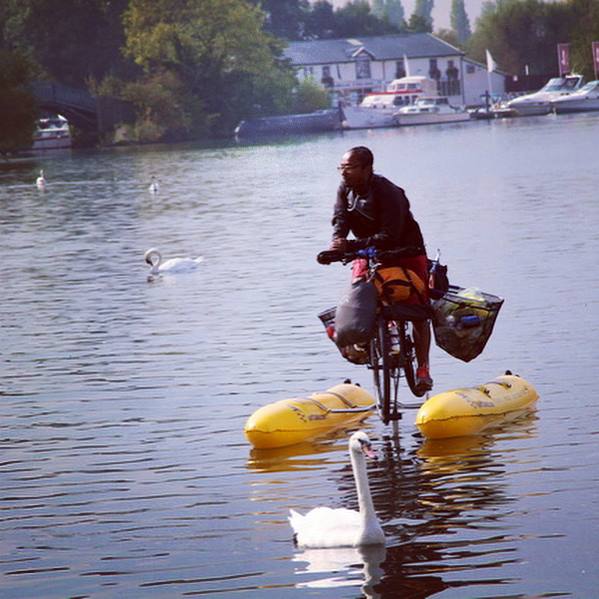 The unusual bike journey took the cyclist 150 miles from Lechlade, Gloucestershire to Tower Bridge in nine days. Using his bike, canoes, kayaks, and stand-up paddle boards, he has collected all kinds of plastic items, from plastic bottles to flip-flops, that would have otherwise ended up in the ocean.

“The Thames Project” was started a year ago, and now Boruah travels to other rivers in the country. His clean-ups are very fruitful and helpful for the environment, but the project’s main aim is to raise public awareness of the plastic pollution issue. The floating bicycle is great at drawing attention, which is a big help, and Boruah hopes it will be effective in inspiring others to take action. Moreover, the entrepreneur and his team sample water, collect, geo-tag, count plastic litter, and share their findings on social media.

Boruah has also talked about plastic pollution and the way it impacts us all during his TEDx Talk. “Plastic is now in the air we breathe, the water we drink, and the food we eat,” he said …

“Life is about being with Mother Nature, enjoying Mother Nature, challenging yourself from out of your comfort zone, and if you can do something good while doing it, why not?” Boruah told CNN. “You have to care because it’s about you, your health, and the health of your children. Why are we destroying this planet for them?”

Over 8.8 million tons of plastic are dumped into the oceans every year, and it is estimated that some 85 percent of the plastic we throw away is not recycled. To learn how you can be part of the change by reducing your use of disposable plastics, check out One Green Planet’s #CrushPlastic campaign!

All image source: The Thames Project/Facebook