Eggs are Nearly as Bad for Your Arteries as Cigarettes! 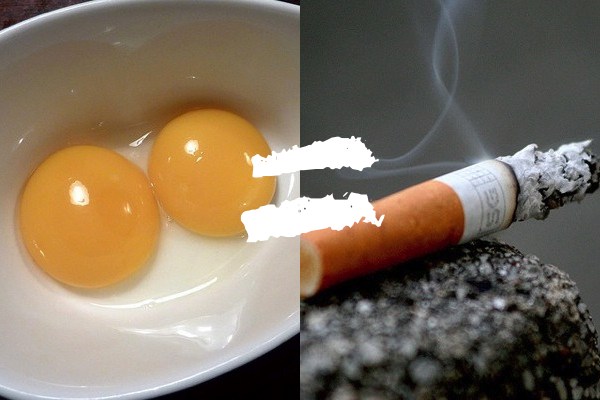 According to a new study published in Atherosclerosis, consuming eggs may be nearly as detrimental to heart health as smoking cigarettes.

For the study, researchers at Western Ontario University surveyed 1,231 patients about diet, smoking, and exercise. They then used ultrasound to establish a measurement of total arterial plaque.

They found that the patients who consumed the most whole eggs experienced a narrowing of the carotid artery 2/3 that of the study’s heaviest smokers. Similarly, they also noted that people eating three of more egg yolks per week  had significantly more plaque on their artery walls than those eating two or fewer yolks a week.

Lead researcher Dr. David Spence explained: “What we have shown is that with aging, plaque builds up gradually in the arteries of Canadians, and egg yolks make it build up faster – about two-thirds as much as smoking. In the long haul, egg yolks are not okay for most Canadians.” We’re guessing this also applies to Americans.

Props to Dr. Spence for helping spread the word about the detrimental health effects of eating animal protein in general, and eggs in particular.