Animals feel emotions just like humans do. This little rhino loved his mom, but he had to watch as she was murdered by poachers. Now, he cannot sleep alone. I think anyone who had to see something like that would feel the same.

Baby Gertjie, as he is now called, was rescued by the Hoedspruit Endangered Species Center (HESC) in South Africa. The HESC released a statement soon after the rescue, saying, “It was a devastating sight, as the tiny animal would not leave her side, and was crying inconsolably for her.”

But now, Gertjie’s future is looking up. He is surrounded by the loving and tireless workers of HESC and even has a surrogate sheep-mama named Skaap to keep him company. He now gets to spend his days “taking long walks, [having] mud baths and grazing.”

Here he is basking in the love of one of the HESC’s staff. 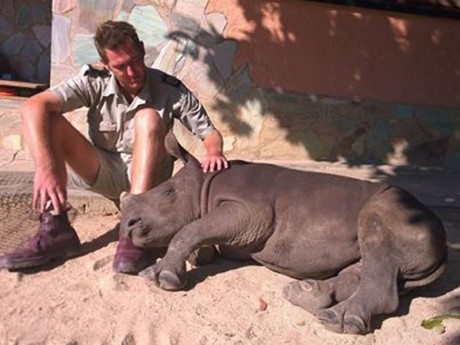 Gertjie is in good hands now, but he’s only one baby rhino. One rhino is killed every 10 hours on average to meet the demand for their horns. A rhino horn is worth more than gold on the black market, and if this rate of poaching continues, all rhinos could be extinct by 2026!

One day, when he is grown, Gertjie will be released back into the wild. Let’s make sure he’ll never see a poacher again!