When a Model of Health Develops Cancer 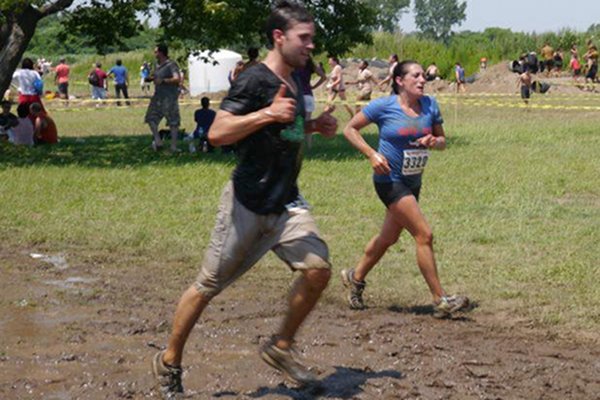 Before July, 2012 twenty seven year old Bud Burdick was enjoying his first year in New York City even as he met some challenges. His blog, “Bud in the Big Apple”, chronicled his adventures with posts such as, From Hernia to Rugged Maniac: My Quest to Become the Best Bud I Can Be.

Recently, Bud, the former capoeira club president, and I, the former advisor, had planned to get together. Then, on July 26th, I saw this posting, “Well Facebook friends, it appears life has thrown a really large curve ball in my direction. I will not be on here for a while.” Concerned, I contacted Bud and received this reply: “Chris, I have been diagnosed with leukemia.  I will be in the hospital for 30 days for treatment. Crazy turn of events.  I was diagnosed Thursday morning and had to go right in for treatment.”

I researched his form of cancer – acute myelogenous leukemia  or AML. According to the American Cancer Society the key statistics  about AML indicate there are about 13,780 new cases and 10,200 deaths each year.  I emailed Bud and wrote, “Stunning news…. I imagine you have started to do your homework. I realize sometimes information can provoke anxiety, but in matters of health I think it’s best to be as informed as possible. Try to know as much as you can. I’ve pasted some sites below.”

The results of his research and ruminations led to a blog titled, “From Leukemia to the Future: Where is This Taking Me?” His blog, written two days post diagnosis, sheds light on how a fit, thoughtful, sweet, yet tough vegan plans to approach such a challenge. However, it is what concerned him just before his body forced him to seek care that might best convey the person he is. Day 3 of chemotherapy treatment, and soon after I arrived, I described to him what I witnessed on the train from New Jersey to New York, Penn Station: many people not freely offering the available seat next to them. They pretended to not notice those searching for seats and attempted to occupy as much of the seat as possible to discourage anyone from asking, “Do you mind if I sit here?” Bud found this strange – it was his experience that people rather freely gave up their seats on the subway. He said, “Normally, I’m happy to give up my seat, but just before I was diagnosed I prayed that an elderly person didn’t get on because I didn’t think I could give up my seat.” Literally dying from cancer, he was worried he didn’t have the strength to offer someone else his seat.

How or why does a 27 year old healthy vegan get cancer? No one knows, but what is known is that no one can control their genes or many of the environmental insults that confront us all. The best we can do is improve our odds by taking control of those things that influence risk. Anyone can develop cancer, but as in Vegas – it’s better to have the odds in your favor (through diet, exercise, not smoking, etc.).

Bud eats a well-balanced vegan diet, is easy going, and is a chiseled athlete; he finished 7th out of 94 participants in the Rugged Maniac despite not being a runner and quite possibly having cancer at the time. If anyone should ask “why me” it’s him, but after seven days in the hospital Bud wrote, “I have never been one to ask why, but more to ask why not?” While the odds are low – based upon a U.S. population  of 314 million, about one American out of 22,820 develops AML each year – the odds mean little to Bud and the 13 thousand individuals in this same life-threatening situation.

Many people adopt a plant-based diet in order to avoid or treat cancer. I first chose to be a vegetarian about one year after the death of my dad’s best friend, Tom Dillon, to kidney cancer. Our conversations and his passing caused me to do a lot of reading. Article-after-article stated meat increases the risk of cancer and plant foods decrease the risk. It was an easy decision. What I’ve learned since that time has caused me to eliminate all animal products. As the t-shirt Bud gave me 3 years ago states: “Vegan: For Health, For Animals, For Earth, For Me, For Life”.

I was 35 years old on October, 25th, 2003, when my mom died at age 61, 23 days after being diagnosed with glioblastoma multiforme, an aggressive form of brain cancer. Was it due to her smoking habit or all those dental x-rays? In individual cancer cases it’s not possible to be certain about the cause, and once a person develops cancer it is not helpful to focus on why the cancer developed.

Being involved in my mother’s care provided me with a glimpse of what I refer to as the Lance Armstrong fallacy – the belief that with the right attitude a person can beat anything. Prior to a surgery that would, in a best-case scenario, buy her one or two more years of life, a nurse showed me brain scans that revealed very large tumors. We then walked into the room where my mom was waiting anxiously. Despite knowing the grim prognosis, the nurse smiled cheerily and proceeded to ask my mom, “Are you a fighter?”

The question the nurse asked was no doubt a well-meaning attempt to inspire my mom, but it was also thoughtless since it unfairly placed the onus of recovery on my mom. Was she a fighter? How does anyone know until this particular battle begins? She spent the previous days muttering “I don’t think so” one hundred or more times. She could not think well because of the tumors in her brain, yet she was being asked if she’d be a good fighter. I swore without speaking. My mom should not think she lost the battle due to some personal defect in approach or attitude.

Many significant people in my life have been affected by cancer, and based upon these experiences I have concluded that cancers can be categorized into 3 “types”:

While it is still early in Bud’s journey, there are many reasons to believe this “Veg Strong” young man will, through this experience, become the best Bud he can be. However, challenges lie ahead. On the day I completed a draft of this blog, Bud updated his Facebook status: “I walked into this hospital July 26, 2012. I am walking out exactly four weeks later, August 23, 2012.” Nine hours later he posted about the woman he shared a home with prior to his hospitalization: “R.I.P. Grandma. Ruth DeDominguez – May 10, 1922 – August 23, 2012.” The next day Bud emailed, “Chris, I received news yesterday of further treatment.  It turns out I will have to go back to the hospital for 3 more stays.  That is, I need to go back for the same treatment I just received 3 more times, one month apart.  Pretty much I will be in and out of the hospital a month at a time for the next 5 months.”