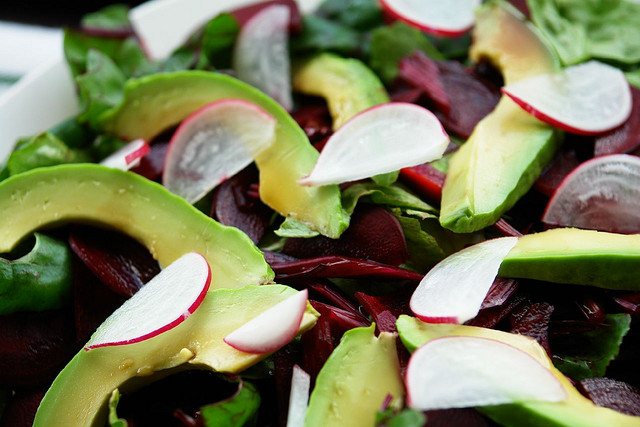 I had the opportunity to catch one of the first screenings of Forks Over Knives in New York City last year. Besides loving the film myself, I came away feeling that I could show it, with confidence, to an omnivore of any background and feel confident that veganism was being presented in an accurate and inarguably rational and positive light. Yes! We need more media of this sort.

Needless to say, as the film has been making its way around the country, it’s been starting up conversations and, we hope, changing everyone’s eating habits right and left. But if it hasn’t come to your town, there’s a new companion book that’s almost as tasty.  It’s called Forks Over Knives: The Plant-Based Way to Health, edited by Gene Stone.

Just like the film, the book sets out a 3-pronged rationale for following a plant-based diet.

First, it’s more healthful. There are thumbnail sketches of the scientists who have studied the issue and distillations of their stunning results.  Neal Barnard, Caldwell B. Esselstyn, T. Colin Campbell, Terry Mason, and Pam Popper are just a few of the luminaries represented. They dish up the statistics showing how vegans outwit heart disease, cancer, depression, diabetes, and a host of other maladies.

Second, it’s better for the environment. Among the pithy factoids in this section is this one: “If the average American meat eater were to reduce his or her intake of animal products to 25% of total calories, it would reduce his or her [carbon] footprint by approximately one ton. Adopting a purely plant-based diet would mean a two-ton reduction in carbon emissions.”  Per year! Which a lot of us already know intuitively, but it’s nice to see it stately so clearly in black and white.

And third, a vegan diet banishes cruelty to animals and allows us to be more humane. If we’re not eating chicken nuggets, then we’re not supporting the industrial poultry farmers who burn off the birds’ beaks and cram the hens into airless metal cages. If we’re not drinking milkshakes, then we’re not a party to the injustices inflicted upon factory-farmed cows who stand thigh-deep in their own waste and are shot full of antibiotics and growth hormones.

For all these reasons, one may have come out of the Forks Over Knives movie theater desperate to switch over to a vegan diet, but perhaps unsure of how to go about it. Fear not. At the back of the Forks Over Knives book, there are 125 recipes contributed by 25 incredible vegan chefs. How about whipping up a soup like “Cream of Broccoli Deluxe” and an entrée like “Layered Tex Mex Lasagna” for supper tonight? There’s even a list of kitchen equipment the healthy cook might need.

Unlike The China Study, which in some circles is considered the vegan Bible and which covers the same material, Forks Over Knives is short and zippy. Sprinkled throughout the book are quotes from ordinary eaters who became healthier and happier by going vegan. So make room on your bookshelf—this one’s a keeper.