Three beats one!  The super powered pint size mulberry comes in a trio of types:  the white mulberry, native to eastern and central China, the red or American mulberry, native to the eastern United States, and the black, with roots stemming from western Asia.  The fruit of the large, deciduous Morus tree, these 2-5 cm long berries have been used for their medicinal and nutritional benefits since ancient times.

So what are they good for?  Mulberries are a brilliant source of resveratrol, a potent phytonutrient that grapes have long been known to possess.   Researchers believe resveratrol can prevent and fight cancers as well as protect against stroke risk.  In Chinese medicine, mulberries are also considered to be a blood tonic, meaning that they cleanse the blood, increase its production, and also act as an effective liver cleanser.

Oddly, these guys are quite high in iron, a rarity among berries, and are a great source of vitamin A, E, K and B-6, plus potassium, manganese and magnesium.   In addition, these berries are an excellent source of vitamin C another powerful natural antioxidant.  Eating foods rich in vitamin C helps the body develop resistance against infectious agents, counter inflammation  and search out and destroy harmful free radicals.

Refreshingly tart and sweet and fleshy, these berries are a low calorie addition to any dessert or snack, and can be consumed in the form of supplements, juice, dried, or the fresh fruit itself.  You can enjoy them straight up on their own, or they are equally as delish used as a substitute for raisins in recipes,  or as a sweet and chewy add in to granola, salads, or trail mix.  Here, some great options to get you on the mulberry road: 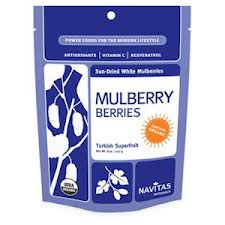 As always, Navitas delivers a product you can feel good about: these Turkish berries (not the candy kind!) are 100% organic, non-GMO, raw, kosher, gluten-free, and vegan!