The Link Between Eggs, Smoking, and Death 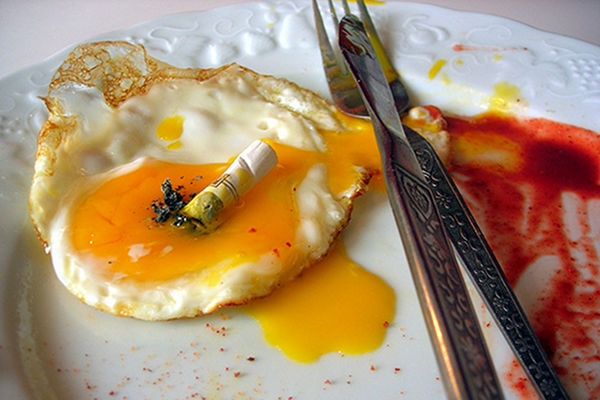 Big news on eggs, and boy is it shaking things up.

Last year, the Harvard Nurses’ Health Study reported that the daily consumption of the amount of cholesterol found in a single egg appeared to cut a woman’s life short as much as smoking 25,000 cigarettes. As if that weren’t enough to scare us away from eating eggs, last week, a study published in the journal Atherosclerosis found that just 3 eggs or more a week was associated with a significant increase in artery-clogging plaque buildup, a strong predictor of stroke, heart attack, and death. Those that ate the most eggs had as much as two thirds more the risk of those that smoked the most (the equivalent of a pack-a-day habit for 40 years or more).

This is not the first time the egg industry has had its huevos handed to them, but this time it’s very serious business. This latest study was performed by three academic heavy hitters: David Spence, the Director of the Stroke Prevention & Atherosclerosis Research Centre; David Jenkins, the guy who invented the glycemic index; and Jean Davignon, the Director of the Hyperlipidemia and Atherosclerosis Reasearch Group at the Institute for Clinical Research in Montreal. In a devastating review they previously published in a journal of cardiology, they pointed out a fundamental flaw tainting many of the studies the egg industry has funded to muddy the waters on the issue. Studies measuring the effects of egg consumption on fasting cholesterol levels just reflect what’s happening to our arteries for the last few hours of the night, not after we’ve eaten breakfast. When the effects of dietary cholesterol are measured in a non-fasting state—how we spend most our lives—researchers have found the kind of increases in cholesterol, inflammation, and arterial dysfunction that one would expect given the evidence linking egg consumption and cardiovascular mortality.

One egg may have more cholesterol than a Hardee’s Monster Thickburger, which contains two-thirds of a pound of beef, three slices of cheese, and four strips of bacon.  Read that again, because it’s shocking and I don’t want you to miss it.  The fact is, a single egg may exceed the recommended daily limit for cholesterol. One egg (which, by the way, only has about 6 grams of protein), and we could just eat celery the whole rest of the day and potentially still be over the limit.

This is why Dr. Spence, the lead investigator on the new study, told the press that egg yolks “shouldn’t be regarded as an item that’s suitable for human diets.” The egg industry countered that the safety limit for cholesterol intake that may not even allow a single egg is only for people at risk for heart disease. Dr. Spence’s reply was simple: most everyone is at risk of vascular disease—it’s the #1 killer of men and women. The only people who should eat eggs regularly, Dr. Spence asserted, “are those with a terminal illness.”

This landmark review did not go over easy with the egg industry. As revealed in a series of internal American Egg Board memos retrieved through the Freedom of Information Act, they debated the “wisdom of making industry responses when the public knows there is a vested interest….” So Mitch Kanter, the Executive Director of the American Egg Board’s “Egg Nutrition Center,” proposed they contact “some of our ‘friends’ in the science community” to have an “objective, external source author the response.”  “If you do so,” Mitch wrote to one of their “friends” at Yale, “we’ll certainly compensate you….” But the prominent Yale physician refused to “participate in an overtly antagonistic letter” given his friendship with one of the co-authors of the review.

Dr. Spence compares egg industry tactics to those of Big Tobacco. “Who are you going to believe?” Dr. Spence asked an interviewer. “Somebody who sells eggs or three…leading experts on cardiovascular prevention, cholesterol and nutrition?” See my blog Meat Is the New Tobacco for more on these parallels.

To be fair, eggs are not the most concentrated source of dietary cholesterol. According to the official USDA nutrient database, eggs come in second. Brains are #1. The top 15 sources of cholesterol are braised veal brains, then simmered cow brains, raw cow brains, cooked pig brains, lamb brains, raw pig brains, fried veal brains and only then eggs at #8, dried egg yolks. Then more brains, eggs (whole dried), brains, brains, eggs (dried), brains, and eggs (raw yolks). Avoiding cholesterol is a no brainer (sorry, had to!). The only population that appears at higher risk than egg-eaters? Zombies.

In their landmark review, Drs. Spence, Jenkins, and Davignon concluded that waiting until our first stroke, heart attack, or diabetes diagnosis to avoid eggs may not be prudent. They conclude: “Stopping egg consumption after a heart attack or stroke would be like quitting smoking after a diagnosis of lung cancer: a necessary action, but late.”