What Did American Indians Eat, Actually? 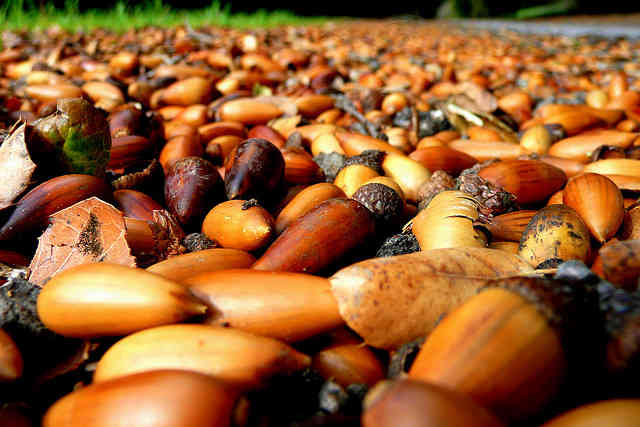 A couple of months ago, in early November, 2011, my wife Madeleine and I visited Natural Bridge State Park in the mountains of Virginia, and as part of that, we also visited the Monacan Indian Living History Village that is there. It was a fascinating experience!

The Monacans were a tribe living for many centuries in the Appalachians before the arrival of Europeans, and the display at the state park is a replica of part of one of their villages. It was staffed by several docents who were there to explain things to the tourists. We happened to arrive there shortly after a large field trip of local high school students had arrived, so there were probably 60 kids there and a male docent was explaining to them the Monacan people’s life. He was, not surprisingly, talking a lot about their methods of hunting and fishing and how they killed and ate animals for food.

As Madeleine and I were looking at some of the beautiful baskets they created, a female docent came over and we started talking about the food practices of the Monacans. There was a small plot of corn growing, and I asked her about the corn the Monacans traditionally grew and what percentage it was of their total food consumption. She replied that it was only about two percent. She told us that she is herself descended from the Monacan Indians, and that her people had traditionally set up and stayed in villages such as this one for several years, and that they would then would move to a slightly different location in the same general area, and did this repeatedly because they would gradually exhaust the local resources. I asked if she was referring to the animals who were hunted and fished, and she said no, that meat and fish accounted for less than two percent of their food. Virtually all their nutritional needs – 96 percent – came from acorns, together with nuts, berries, roots, seeds, leaves, shoots, and other plant foods that they gathered.

From what I have learned, the Monacan Indians were pretty typical of the people living here in North America before the Europeans came. Indians’ diets were overwhelmingly plant-based, as in the case of the Monacans, according to this docent, 98 percent. And yet, ironically, all the school kids visiting the Monacan Living History Village got the impression from the male docent that they subsisted primarily on meat and fish. They left the Monacan Village with a completely different message than we got, one that would reinforce their acceptance of the foods in their school lunch programs and at the local fast food restaurants, and it was in many ways forced onto them by exploiting their trust and innocence. Of course the male docent was in no way consciously exploiting the children, but was part of a process that happens inexorably—the replication of culture.

What I continue to discover is how far from reality are many of the “official stories” that we tell ourselves and teach our children. They are stories that serve a specific purpose, which is to justify the existing order, and they are passed on effortlessly and subconsciously, because they make us all comfortable in believing, in this case, that our current practice of enslaving and slaughtering huge numbers of animals for food (75 million daily in the U.S. alone) is somehow a normal and natural expression of who we are as human beings. It is no accident that we term native cultures “hunter-gatherers.”

This emphasis on “hunter” for earlier humans is chosen by the mainly male meat-eating anthropologists whose views are unconsciously filtered by their own culturally-imposed meat-eating behavior, and the deep discomfort it inevitably causes. We will and must go to great lengths to justify violent behavior, and this is an example of this.

It is long past time to question these official stories, and to create new stories that more accurately reflect the fact that plant-based foods provide us all that we need to thrive on this Earth and celebrate our lives here with wisdom and compassion. The animals of this Earth, the oceans, rivers, and ecosystems, hungry people, slaughterhouse workers, and the future generations of all living beings are certainly yearning for the day when we awaken from the indoctrinated delusions that we need meat and dairy to get adequate protein and calcium, and that the world and nonhuman animals were put here for us to use.

We are not separate from this world and from the precious web of life here. Eating the products of enslaved and murdered animals forces us to forget this, but at any moment we can question the official stories, remember the truth, and become a force for healing, peace, joy, freedom, and health for all. The ancient Lakota prayer, Mitakuye Oyasin – “All my relations” or “All are related” – reflects this fundamental human wisdom of our essential interconnectedness that is repressed by the corporate diet of death and denial.
The wisdom of the Monacan people can inspire us today if we listen deeply within and question everything.