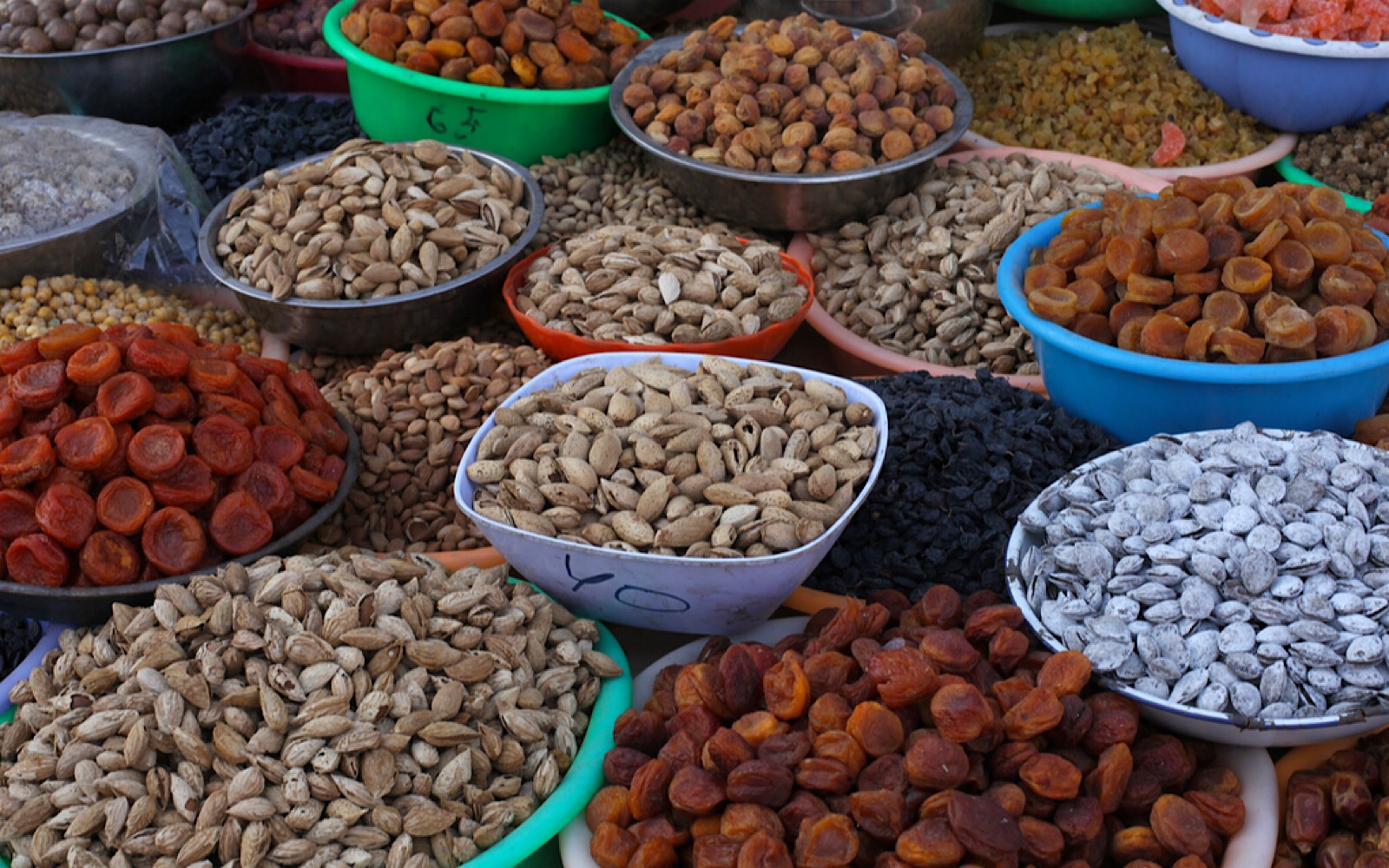 Buying in bulk has become a revolutionary way of shopping, and more and more these days bulk bins are showing up in average supermarkets. That’s a good thing. It helps us cut down on the amount of waste we are producing, especially when folks reuse bags. It also usually means we are going for healthier food, items that haven’t been doused with chemicals to keep them “fresh.” In other words, we should be celebrating the bulk bins.

On the other hand, it is also important to realize that not everything in our pantry or refrigerator was meant to be stored in bulk. For example, many fresh fruits and vegetables will likely go bad within the week, so buying more than we can eat during that time doesn’t make a lot of sense unless we plan on preserving them.

Some items, however, will last for ages — weeks, months, years –- without rotting or “expiring,” and it’s those items that we should be looking out for in the bulk bins. 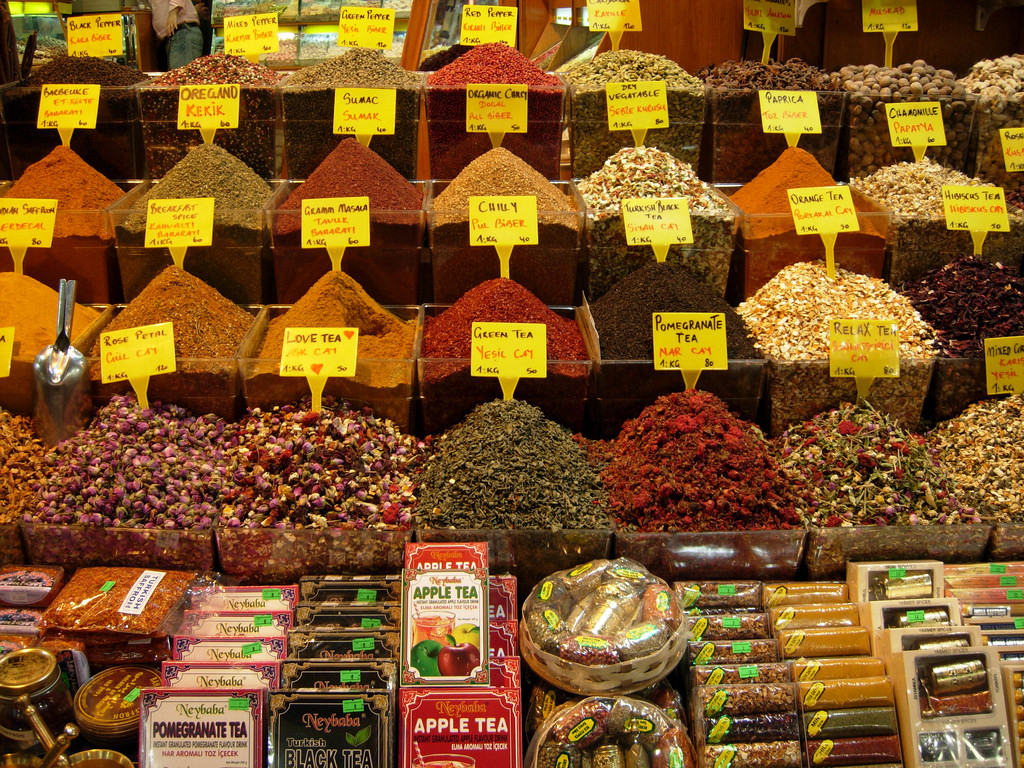 Herbs and spices are the pizzazz of most meals, so they are needed in every kitchen. Plus, they have a heap of nutritional and medicinal value. However, they tend to be overpriced because of individual packaging of small quantities, often in fancy hard plastic shakers, which undoubtedly impact the price.

Herbs and spices are much cheaper to buy in bulk, and the other good thing about it is you get the exact amount you want. For example, if you know you go through loads of chili powder, you don’t have to buy a measly amount every month or so. Or, if you only need a bit of tarragon to try out a recipe, then just buy what you need rather than a whole shaker.

Either way, it’ll save money and resources.

Generally, nut butters come in either peanut or almond, though some places up the ante a bit with different nuts. Regardless, the point here is that the nut butter will usually be significantly cheaper than the same amount in a sealed jar. An added bonus is that containers/jars can be reused so as not to create trash. And, yet one more notable inclusion is that, with nut butters in bulk, there are often no added elements like oils, salts, sugar, etc.

Plain old nuts, too, are a favorite snack amongst the world’s plant-eaters. They are a good source of healthy fats, protein, and vitamins, and they are also very good for filling up a stomach. Buying them in bulk is much cheaper and less wasteful than buying individual snack pack versions.

Of course, whether it’s nuts or nut butter, they all store very well.

Seeds, like the trendy superfoods like hemp and chia and the old standbys like pumpkin and flax, are a great deal cheaper from the bulk bin, and it doesn’t matter if they sit on the shelf for a little while, as they don’t quickly go bad. Obviously, buying a pound of sunflower seeds in a reusable bag rather than ten tiny packets equates to much less waste as well.

Pulses — beans and peas — are a primo item to buy in bulk. They, too, are actually seeds. For one, it’s easier to find organic versions in the bulk bins. Secondly, there is usually a much broader selection to choose from than the typical bags on shelves. Lastly, they are a great plant-based source of protein, fantastically full of fiber, and yet another food that fills you up.

Neither seeds nor pulses are going bad anytime soon, so there is no need to worry about having to throw them out. 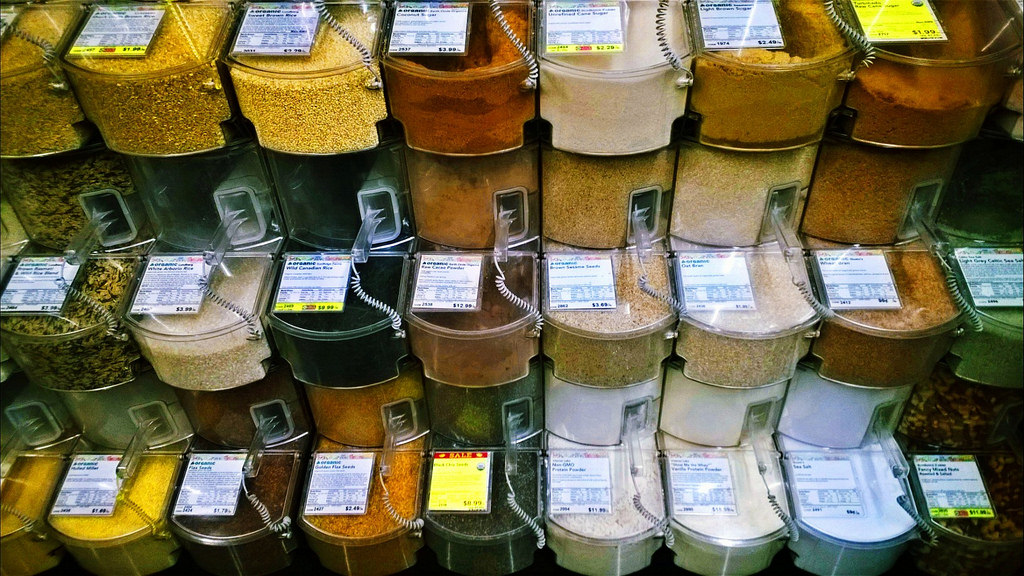 Organic grains often come cheaper when found in bulk bins, and the selection is great. Oatmeal and rice will certainly feature, and in great variety, but there are also other lesser available grains. Barley, spelt, bulgur, grits, millet, quinoa (actually a seed), and so on are regularly featured at the bulk bins.

Additionally, there are a plethora of flours available, from run of the mill whole wheat flour, almond flour, rice flour, amaranth flour, and on it goes. While there, look out for other baking goods, like baking powder, baking soda, and sugar. It’s possible to get everything needed for fresh bread and cookies from the bulk bins.

Again, these things naturally have a long shelf life.

Nearly every vegan kitchen has nutritional yeast because it is such an easy and tasty source of B-12, our most difficult vitamin to wrangle. Nutritional yeast is a regular feature in bulk bins, and it is usually dramatically cheaper buying it this way. Just be sure to check that it has been fortified with B-12.

Have you ever heard of nutritional yeast going bad? It doesn’t stay around long enough!

Dried fruit is another great bulk bin buy. Again, this cuts down on packaging, and it’s easy to find organic versions without unwanted additives. The price is often better, too. And, don’t forget to keep an eye out for dried vegetables. Some of them, like okra, beets, or sweet potato, make fantastic snacks for the midday munchies.

The dehydrated state helps to preserve fruit and veggies for eons.

The shortest way to put it is that bulk buying is best for things that aren’t likely to expire before you use them. With the list above, tossing out a bunch of food (and money), and a ton of plastic waste isn’t likely to be an issue, at least not from the bulk bins.

Looking for some gear to store all of these bulk items, waste-free? Check out this post.