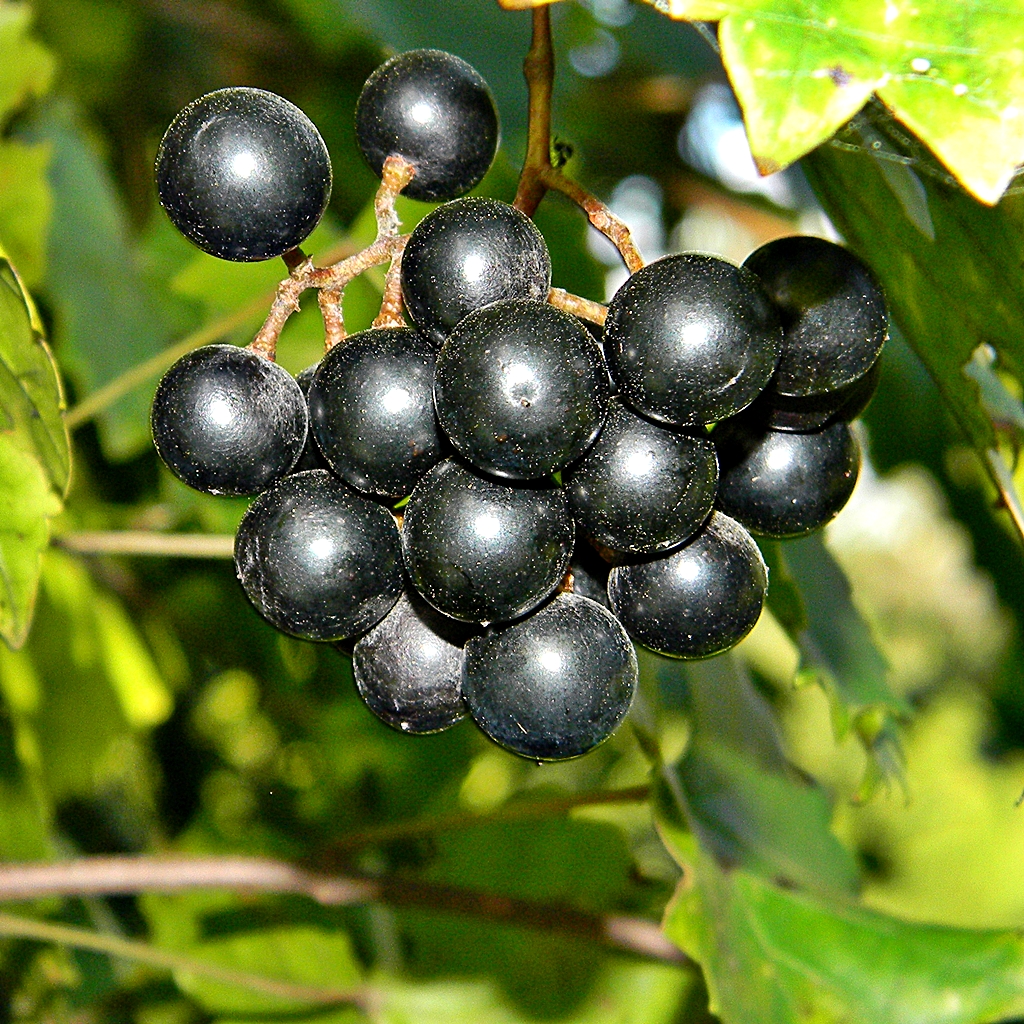 It doesn’t take a genius to decipher that grapes are not all the same. Look at the varieties of wine on the market shelf, and the amount of options is dizzying. Then, of course, there are the different grapes to be found in the produce section. And, grape juice. And, grape jam. And, so it goes on and continues.

When it comes to grapes native to the United States, the selection decreases dramatically. But, that’s not to say these grapes are lacking in any way. They have a rich cultural history in the warmer regions of the US, particularly the southeastern states. Muscadines were used by Native Americans (dried to make raisins) as well as colonialists (wine).

Muscadines and scuppernongs (a popular variety of muscadine first discovered near the Scuppernong River in North Carolina) can be used as table grapes, but they do have tougher skin than supermarket grapes and seeds to boot. They are most revered as juice, jelly, pie filling, and homemade wine.

There are many cultivars of muscadine grapes to choose from now, and through the years, these have been naturally improved to yield more than the early cultivars and often bigger, tastier fruits.

More importantly, though, the new types of vines are bred to be self-fertile, producing perfect flowers rather than male or female. Older varieties required additional vines to pollinate.

With self-fertile vines, it’s possible to grow just one plant and still get a harvest. For those of us with limited space, this is important. A muscadine vine needs 20 feet or more to roam.

Scuppernongs and muscadines are native to the United States, but they won’t thrive throughout them. They like the temperature to stay fairly warm. In fact, they are fine in the heat of Louisiana and Florida.

Muscadines can also withstand freezing temperatures without worry. However, in places that drop below 10 degrees Fahrenheit (USDA Zone 6 or colder), the vines will not likely survive.

That said, in borderline regions with mild Zone 6 weather, it might be possible to have some success with muscadines. They can be grown in coastal New York, parts of Pennsylvania, Oregon, Washington state, etc.

The most important part of the soil situation when planting muscadines is drainage. Muscadine grapevines will not tolerate spots where water stands for even a short time. They, of course, tolerate wet climates, but they can’t sit in water.

Other than that, they can deal with most soils. Hardpan soils, however, are not a good medium as the roots need to really reach down.

The ideal pH balance of the soil is around 6.5, which is slightly acidic and akin to what most vegetable gardens strive towards. Overly acidic soils can get lime to raise the pH, or alkaline soils can receive sulfur treatments.

Most cultivated grapes don’t need as much space as muscadines. Typically, grapes can be spaced at about eight feet, but scuppernongs and muscadines need 15-20 feet of space between them.

Obviously, home-growers aren’t looking to plant rows of muscadines, so using a sturdy pergola, arbor, or fence will work very well for a single vine or maybe even a couple (if the structure is large enough).

As with grapes, muscadine vines can live and produce for decades (the first couple are best), so having a long-lasting structure is a good idea.

The Right Time, The Right Way

Most enduring perennial plants, like trees and vines, work best when they are planted in the dormant state. That means in late fall to early spring, when it’s cold.

With muscadines, it’s best to plant them in the springtime when sub-freezing temperatures are unlikely.

When planting the vines, the hole should be twice as wide and twice as deep as the roots. Backfill the hole with the loose soil. This will provide young roots a place to make themselves at home easily.

Plant the vine so that the roots are about an inch lower than the soil line and prune the vine back to a single, strong cane with two or three buds.

Muscadines, any grapevine, must be pruned annually to get rid of the older, diseased canes and provide enough space for the plant to thrive. This keeps the plant producing well. Growers can expect to find fruit in late summer after two or three years. Full production usually comes in the fourth year.