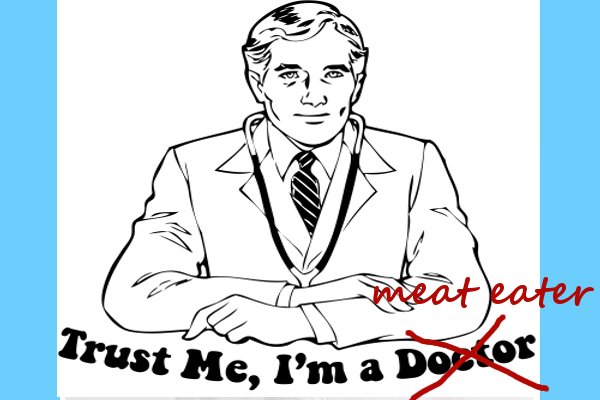 Has your family doctor ever advised you against smoking? Urged you to wear a bike helmet and an automobile seatbelt? Told you, ever so gently, that you ought to lose a few pounds? You wouldn’t find any of these doctor’s orders the least bit surprising, and although it might sting a bit to be told that you are overweight, you wouldn’t be offended, least of all outraged, would you?

What if your doctor recommended that you stop eating meat, or at least cut your consumption way down? Offended now? Has your doctor stepped over some invisible line, moving imperceptibly from “common sense health advice” to “politically charged personal opinion”?

Although there are certainly doctors who openly tout the benefits of a no- or low-meat diet, most either remain silent on the issue or go the other way and actually scare patients into remaining carnivorous. My own doctor treats my vegan eating habits as a curiosity that she must patiently work around (with an under-the-breath sigh of “if you must.”) She’ll fire off questions: “Are you taking B12? You need to have a blood test done to make sure you are getting the nutrients you need. Do you feel okay? You’re looking a little peaked… are you getting enough protein? You do drink milk, right?” She is always respectful, but I get the distinct feeling that she thinks I am making questionable choices. I, on the other hand, am mystified by the fact that someone with her level of education and training still doesn’t consider a carnivorous diet problematic.

There is a serious disconnect within medicine when it comes to meat. In my years spent working as a professor of bioethics at a large Midwestern academic medical center, I was baffled by many things, but none more than the issue of food. I rarely ate on the premises of the med center, but oftentimes my work required me to meet others over lunch at the cafeteria. I would pass by the Taco Bell, Pizza Hut, and McDonald’s concessions—where patients being treated for their cancers or heart disease, and the doctors treating them, could all take their fill of the meat, salt, fat, and sugar. And I would think to myself, “What the hell is going on here?”

Considering the ample list of reasons why a mostly or completely vegetarian diet makes sense, from a health perspective, the failure of medicine to acknowledge the dangers of meat begins to seem downright unethical. We have, on the one hand, a long list of “individual health” reasons to reduce or eliminate meat. For example, heavy indulgence in meat makes it more likely that a person will suffer from one or more of the major killers in the U.S.: obesity, heart disease, and cancer. Eating meat increases one’s exposure to hormones, antibiotics, dioxins, as well as food-borne bacteria such as E. coli. In counseling patients about healthy lifestyles, why isn’t meat-eating among the list of things to discuss? A thorough doctor will counsel patients about seatbelt use, bicycle helmets, and caution them against cigarettes, sexual promiscuity, alcohol and drug excesses, and overeating. They will recommend patients consume less fat, less sugar, less caffeine, less fast food. Why not less meat? Perhaps meat could be approached like donuts or soda: “A little indulgence here and there probably won’t hurt you,” the doctor might say, “but it shouldn’t be a staple of your diet.”

You might say that despite doctor’s orders, you will do what you please. Meat-eating is a personal choice. You can choose to ignore costs to your own individual health. But things are not so simple. Like cigarettes, meat has the potential to harm not only those who partake, but a great many others as well. American-style meat-eating represents a serious threat to public health, both at home and abroad. Livestock production accounts for about one-fifth of worldwide greenhouse-gas emissions, making it one of the prime movers in global climate change; meat-eating contributes to global patterns of hunger and malnutrition because huge quantities of grain are diverted to feed livestock, and land is used to grow feed crops for animals rather than people. Forests are mowed down to make room for cattle. Feedlots pollute water resources and compromise air quality. And there is growing concern that livestock may spread methicillin-resistant Staphylococcus aureus (MRSA).

Physicians play a vital role in the public health machinery. They advocate and administer vaccinations; help control the spread of infectious disease by treating patients and educating the public. And perhaps most important, physicians act as leaders within the community. A recent editorial in the British medical journal The Lancet called on health professionals to take collective action against the causes the climate change, which is arguably the most pressing public health challenge of our time. Wouldn’t this include embracing and advocating a meat-free or low-meat diet?

Should physicians themselves give up eating meat?

If your doctor advised that you lose twenty pounds, would you be more inclined to listen if your physician was himself slim and trim? What if you saw your doctor out behind the building puffing on a cigarette, after she had just advised you to quit smoking? Can physicians convincingly counsel patients about reducing meat consumption without themselves taking this advice? Although it isn’t written into codes of medical ethics that individual physicians must adhere to a higher moral or health standard than their patients, it nevertheless seems intuitive that they would want to mentor the healthy behaviors they promote. It might seem hypocritical if they didn’t.

The American Medical Association is silent on the issue of meat in the diet. A search through the extensive database of ethical and legal policies of this august body comes up dry. There are a few entries that mention meat, but these focus on E. coli and mad cow disease. I got one hit for “vegetarian”: Policy H-150.944 Combating Obesity and Health Disparities, in which the AMA says it supports efforts to combat obesity by providing vegetarian foods in school lunch and food assistance programs. Zero entries on “vegan.”

A notable exception to the profession-wide silence on meat-eating is the Physicians Committee for Responsible Medicine. They advocate a plant-based diet and promote “The New Four Food Groups”: fruit, legumes, whole grains, and vegetables.

Of course, an immediate profession-wide conversion to veganism or vegetarianism is unlikely. But wouldn’t a commitment by physicians to reduce their own meat consumption be a good first step? And shouldn’t physicians at least begin counseling patients about excessive carnivory?