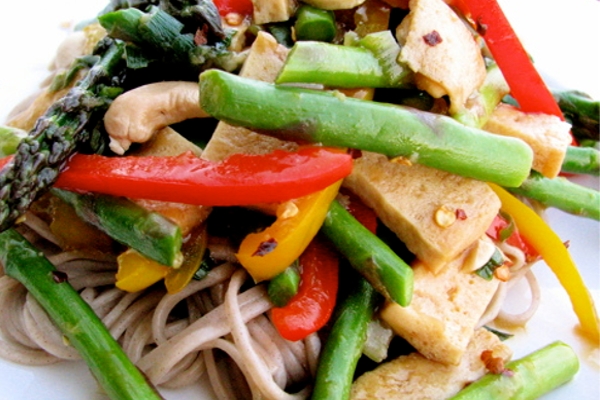 Soybeans have been a part of Asian diets for some 2,000 years. They were first harvested from wild vines growing in northern China and were an early important crop in that part of the world. Although fermented foods like miso were among the earliest soyfoods, tofu has been consumed for at least 1,000 years according to historical record.

Today, soyfoods play a significant role in the diets of many vegans and vegetarians. And looking toward Asian cuisine can give some guidance about how much and what types of soy to eat. Unfortunately, soy detractors have done a fairly good job of confusing these issues, leading many vegans to believe that Asians use soy only in small amounts—as a condiment—and that most of the soyfoods consumed in that part of the world are fermented products like miso and tempeh. Based on epidemiological studies and national food intake surveys, neither is true.

One problem—and a big source of confusion—is that researchers often report soy intake on the basis of total soy protein consumed. That’s different from the total amount of actual soy food consumed. People who are consuming 20 grams of soy protein per day—which is less than 2 tablespoons—are typically eating at least 2 servings of soy foods per day, or the amount found in a cup of tofu or tempeh, or 3 cups of soymilk.

In fact, epidemiologic studies and national food surveys show a wide range of intakes among Japanese adults with 1 ½ servings of soy foods being an average. At the higher end of the range, some adults—usually older people who consume a more traditional diet—consume as much as 2 to 3 servings per day. Soy consumption in China varies a lot across regions, but in Shanghai—where there is good data on food intake of adults—soy consumption is slightly higher than in Japan.

We also have good research on the type of soy products consumed in some of these areas. In Japan, about half of soy consumption comes from tofu and dried soybeans and half comes from the fermented foods miso and natto. But in Shanghai, nearly all of the soy consumed is unfermented, with soymilk and tofu making the biggest contributions. Even in Indonesia, where the fermented food tempeh is considered a national food, nearly half of soy intake comes from unfermented products like tofu.

So, if we look to Asian diets for guidance on consuming soy, it’s clear that all traditional products—tofu, soymilk, tempeh, miso and soybeans—can play a role in healthy diets. Average intakes among Japanese are around 1 to 1 ½ servings, but some people—especially those eating more traditional diets—eat more.