Toxin Alert! Common Pesticides Used on Produce and How They Impact Humans and the Environment 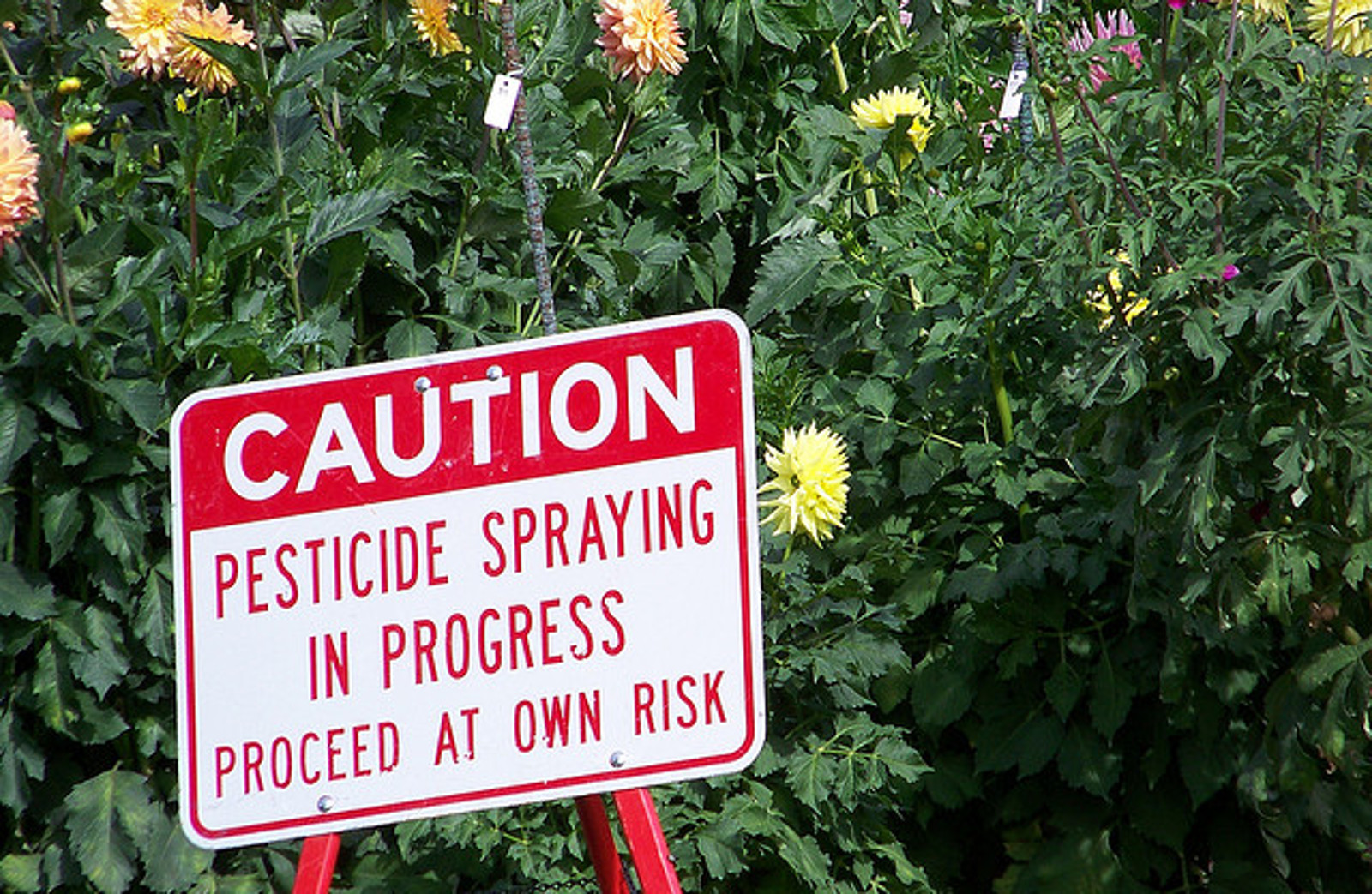 Growing vegetables isn’t the simple, all natural process that it used to be. Or at least, this is the case when it comes to large-scale, industrial farming. While growing tomatoes or blueberries in your backyard may only require diligent watering, protection from squirrels and a little sunshine, attempting to produce thousands upon thousands of these same foods, while avoiding insects, disease and other variables is far more complicated.

In an effort to make our food system as “fool proof” as possible, industrial agriculture has developed a few tricks. And by tricks, we mean industrial grade chemicals that ward off insects, fungus, invasive plants, and a myriad of other “pesky” intruders.

This ensures that the maximum amount of produce can be shipped to consumers across the country (and world at that) with minimal wormholes and other nasty blemishes that might deter their consumption.

Pesticides, including insecticides, rodenticides, herbicides, fungicides and antimicrobials are all used to grow today’s non-organic fruits and vegetables. While these chemicals help to protect farmer’s yields, they can be incredibly harmful to people and the environment.

Organophosphates are the most widely used group of insecticides. These insecticides are commonly used on produce such as apples, peaches, nectarines and many others. The U.S. Department of Agriculture reports that 81 percent of conventionally grown crops are sprayed with this group of pesticides. While they are extremely effective at protecting crops from insects, it seems that their effectiveness may come at a detriment for humans.

According to the Center for Disease Control (CDC), diazinon (part of the organophosphate group) works by attacking acetylcholinesterase, an enzyme that is critical for controlling nerve signals. It may come as a bit of a shock, but these chemicals are not designed to be “bug specific” as such, but they can also have similar effects in people.

“All organophosphates have a common mechanism of toxicity and can cause similar symptoms in humans who have too much exposure,” states the CDC. The average person can be exposed to a small amount of these pesticides by way of the produce that they buy (if not organic), but workers and people who live near farms are at much higher risk of experiencing dizziness, nausea and vomiting, seizures, difficulty breathing, coma and in severe cases, neuropathy.

In a study carried out by the CDC, children with leukemia tested positive for high levels of organophosphates. Other studies indicate that there is a strong connection between lymphoma, leukemia and pesticide exposure.

One of the most troubling details about human pesticide exposure is the fact that they can accumulate over time in body tissues. This means that low-level exposure to these chemicals can build over time and become more and more toxic.Overall, however, there is a lot that we simply do not know about how pesticides interact with the human body.

While the health concerns associated with pesticides are frankly, terrifying, the environmental impact is sadly not much better.

To apply pesticides to large areas of crops, they are typically sprayed which makes it easy for airborne chemicals to travel or “drift” from their target area. In the case of organophosphates, the CDC explains, “After organophosphates are applied, they may be present in the soil, surface waters, and on the surface of the plants. They can move through the soil and contaminate ground water.”

In other words, just because pesticides are applied in one place, doesn’t mean that they stay there. Like in humans, pesticides bioaccumulate in animals and can damage their nervous systems and lead to higher instances of cancer.

Atrazine, a widely-used herbicide has been known to cause male frogs to turn into females. Yes, you read that correctly. This potent herbicide is an endocrine disruptor that causes testosterone levels to drop drastically and increase estrogen.

One of the most well-known, and concerning, impacts of pesticides are the role they play in the decline of the bee species. In May of 2014, a study published in the Bulletin of Insectology, definitively linked Colony Collapse Disorder in bees to low-level exposure to neonicotinoids, another toxic grouping of pesticides. As we know, bees are responsible for pollinating around 100 different human food crops which provide around 90 percent of the world’s nutrition.

Like in the case of human impact, there are many unknowns when it comes to measuring the effect of pesticides on the natural environment. However, if these chemicals demonstrate the potential to throw off an ecosystem or pollute water and soil, should we really question whether or not they should be used?

Feeling a little outraged and overwhelmed about pesticides is normal. After all, we like to eat fruits and vegetables to keep ourselves healthy, and ingesting harmful chemicals is not supposed to be part of the deal! Luckily, there is also a lot that we can do as consumers to protect ourselves and the environment from these toxic chemicals.

You can also make your own “fruit wash” to help remove unwanted pesticide residues from your produce. Although this is not guaranteed to remove all of the harmful chemicals, it can help.

Purchasing organic fruits and vegetables is a great way to vote against pesticides. As the demand for pesticide-free produce increases, farms and food producers will be more willing to make the switch to natural modes of pest control. In fact, according to Food Safety News, in the past three decades, the organic product industry has grown by 3,4oo percent, largely fueled by consumer demands. As a result, organic foods now make up 10 percent of U.S. cropland, and that number is only set to grow. Even huge corporations like Walmart and Target are starting to increase their organic offerings, making this produce readily available to the general public.

Many people tend to avoid organics because of high price, so if you cannot afford to buy organic produce 100 percent of the time, there is an easy guide to help you navigate which fruits and vegetables you should always buy organic due to high pesticide use. Every year the Environmental Working Group comes out with their “Dirty Dozen” list of produce that you should avoid unless it is organic (or home-grown!). They also put out a “Clean Fifteen” list of items that you can buy non-organic and not have to worry about high levels of pesticide exposure.

Being a conscious consumer and voting for the health of others and the environment by choosing organic is a great way to bring about permanent change in the food world. So let’s get eating (organic)!