Care About Clean Air? Here’s Why You Might Want to Skip the Cheese 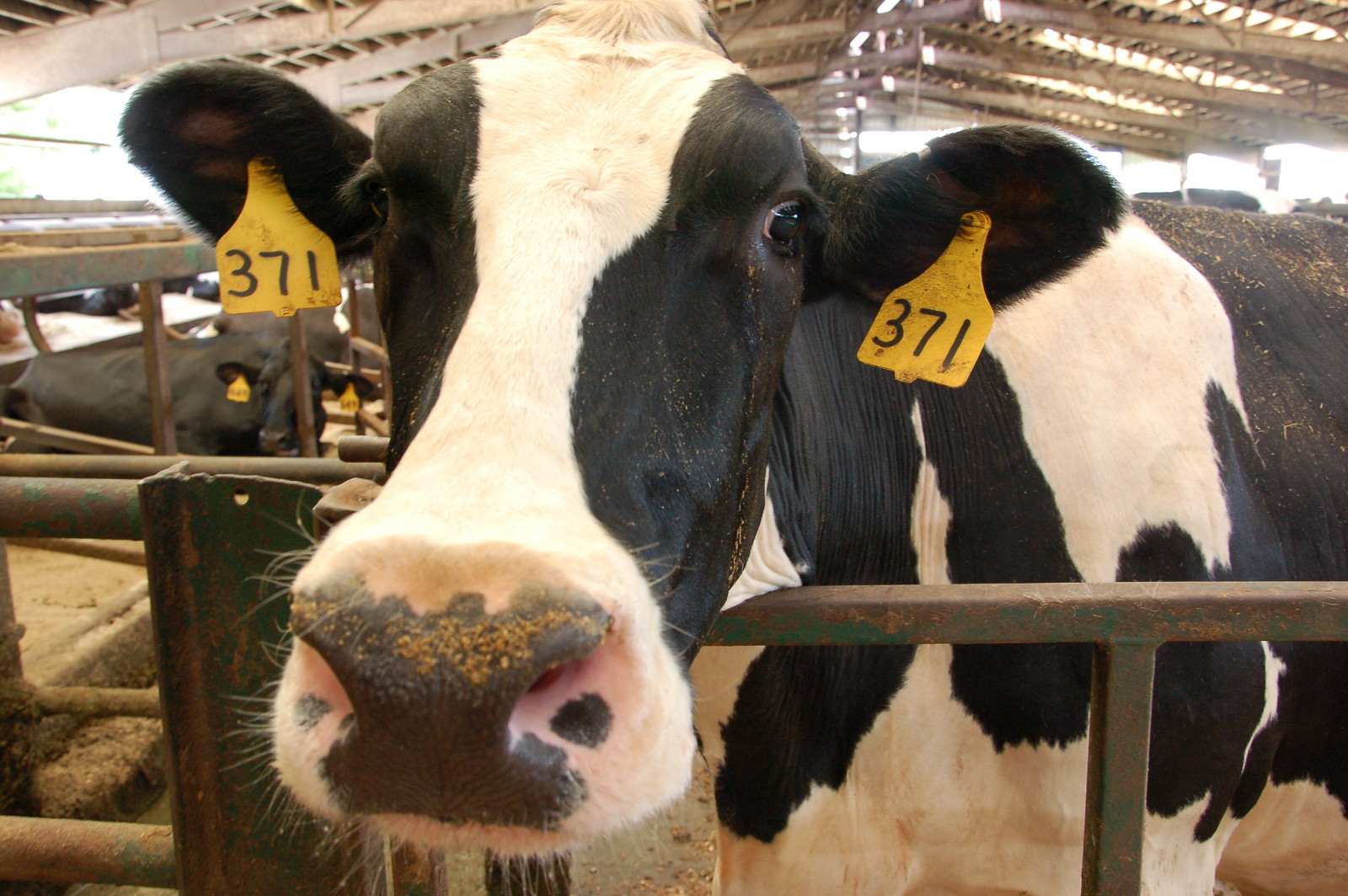 As the world’s population grows and diets evolve, demand for dairy has increased. In the decades between 1982 and 2012, worldwide milk production increased from 482 million tons to 754 million tons. A whopping 6 billion people worldwide consume milk and milk products. India leads the world in milk production followed by the United States in second, and then, perhaps surprisingly, China. While milk production is often associated with developed Western countries, the dairy industry in South Asia has actually seen the most growth.

Cows account for 83 percent of total milk production worldwide, and the majority of milk production in developed countries. Sheep, buffalo, goats, camels and equine such as donkeys produce the rest of milk products for consumers. Many non-cattle milk producers are used by subsistence farmers in small-scale operations. Cattle, however, account for the majority of large-scale and high-output dairy operations. And, unfortunately, they’re also the result of a growing problem with air pollution stemming from the dairy industry.

In 2013, the EPA claimed that nine percent of greenhouse gas emissions in the United States originated from agriculture. Roughly a third of that stems from methane produced by livestock (mainly cattle) during digestion. Another 12 percent of agriculture’s greenhouse gas contribution is accredited to the methane and nitrogen dioxide that arises from livestock manure in the United States. While agriculture may not account for the largest contributions of greenhouse gases to the atmosphere by all estimates, it certainly represents a sizable chunk of pollution produced by personal lifestyle choices.

Sadly, climate change isn’t the only problem created by the emissions the dairy industry releases into the air. Air quality is also affected detrimentally by the industry, causing a variety of health problems. People living in and around dairy operations are at increased risk of exposure to allergens, particulate matter and noxious odors and can be especially dangerous for those with asthma and heart conditions.

Over the years, all those flashy “Got Milk?” campaigns made dairy look like a healthy and smart choice for consumers. But in reality, there are some dirty little secrets the dairy industry doesn’t want you to see. Lots of dirty little secrets, floating in the air in the form of noxious pollution.

So, what exactly is your glass of milk or hunk of cheese doing to the air you breath? Let’s break it down, piece by piece.

Carbon dioxide, or CO2, really seems to be the main molecule we talk about when it comes to climate change. It accounts for 83 percent of all greenhouse gas emissions produced in the United States. According to the EPA, carbon dioxide concentrations in the atmosphere are currently higher than they’ve been in the last 800,000 years. And while a variety of both natural factors and human activities have to do with this fact, it is important to acknowledge the impact on carbon dioxide levels that a dietary choice like dairy consumption have on our air.

Carbon dioxide increases stem from several factors related to dairy production. First, consider the fact that dairy animals have to eat. And to feed them, we have to clear land to make space in order to grow feedcrops. In countries like Argentina and Brazil, forested areas are cleared to make room for crops such as soybeans. Not only does this land clearing free up carbon, it also removes forests that once had the ability to continually sequester carbon.

That land that once used to benefit the atmosphere now is a detriment, and all to feed dairy and beef cattle, along with other livestock. Carbon dioxide also results simply from the natural respiration of cows going about their normal lives, as well as from their manure.

And finally, imagine the fossil fuels releasing carbon dioxide in the transport and processing of dairy products. Not only does all of this carbon dioxide act as a greenhouse gas, it also can cause harm to humans before rising into the upper levels of the atmosphere. Smaller concentrations can cause shortness of breath and dizziness while larger concentrations can eventually lead to asphyxiation.

Around 37 percent of anthropogenic methane in the atmosphere comes from the livestock industry. This coupled with the fact that methane is at least 25 times more destructive to the atmosphere than carbon dioxide in regards to climate change makes dairy and animal-based agriculture in general look like an unwise choice.

Methane from the dairy industry results largely from the digestion process and waste production of animals involved. Ruminants, like cows and sheep, undergo a process called enteric fermentation in their four-part stomach during digestion. As their body processes their feed, methane is produced and exits the cow from one end or the other. Further, methane is produced when manure from dairy operations undergoes anaerobic decomposition in holding tanks or lagoons. In addition to functioning as a greenhouse gas, methane can also cause health issues. In high concentrations, it can act as an asphyxiate and is explosive in the presence of a flame.

Ammonia is released from dairy operations when nitrogen excreted in manure reacts with urea secreted in urine. Ammonia’s most obvious issue is the stench that anyone in its presence will sense. Contact with ammonia can result in irritation to the eyes as well as respiratory system. Additionally, ammonia can have detrimental effects on the environment. When ammonia in the air comes into contact with water droplets, it is converted into nitrous oxide and returns to the earth in the form of acid rain. Ammonia can also take on the form of particulate matter in the air, traveling miles from its origination point and being deposited in other areas where soil and water composition are then altered.

Hydrogen sulfide is not something you can see but surely you’d know it by its stench. It has a distinctive rotten egg odor that can quickly exhaust your sense of smell altogether for a short period of time. Hydrogen sulfide is produced when manure decomposes without the presence of oxygen. This may happen where manure from dairy farms is piled in a heap and not exposed to air, or is decomposing in a holding pit or lagoon. In addition to the rancid odor, human health can be degraded by exposure to hydrogen sulfide in lower concentrations causing irritation to the eyes and respiratory tract, as well as headache, dizziness and nausea. At higher concentrations, exposure to hydrogen sulfide can cause respiratory damage and unconsciousness, with death eventually resulting.

Ammonia in the form of particulate matter has already been mentioned as a negative side effect of the dairy industry on air quality. But the reality is that dairy operations can result in a host of other particles that become suspended in the air, only to further threaten human health. Dust particles stirred up in dairy operations may host bacteria, mites, fungi and allergens as well as inorganic matter that can easily be inhaled, especially by farm workers. This increased presence of particulate matter causes detrimental health issues with documented evidence of increased acute bronchitis for farm workers.

As with any large operation of animals, you can probably imagine the amount of allergens the animals produce. And for individuals sensitive to the dander from cows, this can become a nasty health hazard. A recent study conducted in the Yakima Valley of Washington state found that people living within close proximity of dairy operations experienced increased levels of cow dander both inside and outside their homes. This may be troublesome enough to cause allergic reactions and even exasperate symptoms in asthma sufferers. 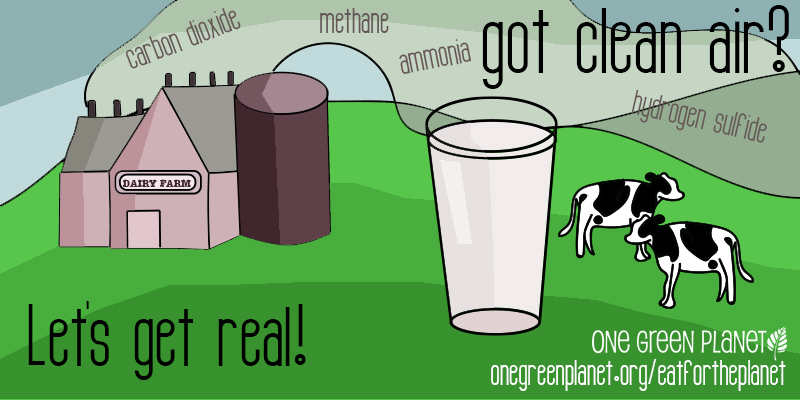 As we become more aware of the impact that our food systems have on our bodies and the environment, it is important to side with scientific findings to avoid the most destructive results of our dietary choices. Animal agriculture and dairy specifically is associated with a vast array of environmental issues in addition to air pollution, including water pollution, soil degradation, and loss of habitat and biodiversity.

While your food choices may be deeply personal, they are also incredibly ecological and social when you take into account the far-reaching impact they have on the people and environment around you. So, will you choose to eat for clean air?